In the Bar Ditch 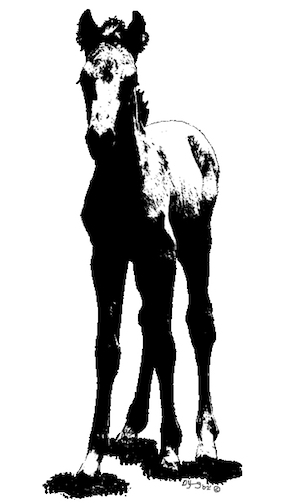 A girl travels down the bar ditch astride a little chestnut quarter horse, flipflops dangling from her toes. I own an appendix quarter horse, a tall, good looking bay mare with a little dot of white on her forehead. At the moment, the very moment I’m standing on the side of the highway with the sharp industrial reek of hot-laid asphalt in my nostrils, staring at the girl riding the cowpony bareback through the bar ditch, a girl with bare tan legs that look mature enough for me to stare at, my bay is foaling. In eastern Washington at my father’s ranch, four-hundred miles away. She’ll be dead by morning. The foal, too. A filly.

I can’t look away. I’ve never been able to. But then I glance at her face. It dawns on me that she is probably a teenager, and I’m a dirty forty-three-year-old man, the father of daughters not much younger than the girl. I let my eyes fall away, but not before staring at those hard thighs. They roll back and forth with the rhythm of the horse’s stride, a dark line of sweat and grime on her skin blinking each time her leg rolls forward.

Is it forty-three that did it to me? This unraveling. Is it too much beer? I don’t drink that much, but I’ve been knocked out a few times, back when I was a bull rider. I’m not a bull rider anymore. I’m in a hotel room and it feels like a donkey is sitting on my chest. My fingers and toes tingle. My breathing is rapid. My heart seems to have left my chest and entered my skull. It beats against my eardrums.

How did I end up here, having a panic attack in a hotel room hours from home, sure I’ve missed something? A run of rebar, a splice. A row of hairpins. The bridge will fall, people will die. I can already see the cracks developing in the concrete, the massive abutments bulging under the millions of pounds bearing down on them. The concrete girders, all that steel, the bridge deck. I’ve missed some key component. It will fail. This is the thought that is swirling around in my head in a hotel room hours from my home.

I know I’m not having a heart attack, but if I was I imagine this is how it would feel.

The bridge was built years ago. It’s still standing.

I’m on a street in Boise. A cool summer rain patters on my hardhat, taps my shoulders. A wonderful respite from the unending heat.

Across the street on the pedestrian ramp stands a girl with bright red hair, wearing jeans and a black T-shirt with some kind of print on it. Some rock band, or youthrage slogan. I don’t know. Her red hair is pretty. Her pale arms fall from her black short sleeves, skin tattooed. Fierce tattoos they seem from here. Violent dark colors. I can’t really make them out, but I imagine skulls with mouths wide open spewing flame and smoke and fury.

The WALK sign flashes. She steps off the pedestrian ramp onto the street. Her lowtop Converse sneakers stepping tentatively across the crosswalk bars, stepping around puddles that have gathered in the rutted pavement. Almost on tiptoes, almost dancing. She’s slightly pigeontoed. I can’t stop staring. I should. It will make her uncomfortable, to see a forty-three year old man staring at her that has spent most of his life in the sun and has a creased and wrinkled face. The face of a sixty-year old, says my wife. But I can’t get past the conflict the girl represents. The fierceness of her tattoos, and her timid, pigeontoed steps. Her face, as she nears, there is nothing angry, nothing brooding, nothing fierce about it. It is the freckled, pretty face of a happy redhead walking through a cool rain on a hot summer day in Boise. She even smiles at me as she passes. A nice, How are you? smile. If I was younger, if I wasn’t a forty-three year old with the skin of a sixty-year old I might think the smile was flirty. But I know better than that.

We got greedy. We wanted a baby out of her. She was so nice we couldn’t just have one of her. We needed two. Now we have none of her.

I sit on the bed in my boxer briefs, just home after a thirteen hour nightshift. Maybe it is the morning after I saw the girl riding in the bar ditch. She came back, on the same horse, only saddled this time. She wore jeans and boots. Was it the same night? I don’t know. The days, this summer, it’s all running together. It’s a big mess. But there in the bathroom is my wife, nude. I’m staring at her through the open door. She doesn’t know I’m watching. She has stepped out of the shower. She’s older than me, forty-five. She was petite when I met her, five-foot three, one-hundred eighteen pounds. Hard ass. That’s right. Hard, tight ass. She’s grown. But that isn’t bad. Her breasts are full, hard, almost like they were store-bought, but they’re not. They’re hers. And even though she’s thirty-five pounds heavier, it’s in all the right places. She leans over the sink, up on her tiptoes, staring into the mirror, smearing something on her face. Her bare calves are tight and her toes dig into the rug that fronts the vanity that holds the sink. Her rump pops out, protrudes. I can already see my hands on it, see my thumbs pressing into the flesh. Jesus, I’m forty-three and I’m wrinkled like a sixty-year old, but looking at my wife, after fifteen years, thirty-five pounds and two kids, I’m randy as hell, randy as a fourteen-year old on a church bus going to church camp in the back seat with the easiest girl in the entire school, with my hands down her pants and her hands down my pants. That’s how my wife makes me feel. I’m thinking I’m going to sidle up behind her and take advantage of her state of undress. So I slide out of bed, move on through the door and then I see that she’s not smearing something on her face. She’s wiping it off. Wiping off tears. She sees me behind her. I don’t try to touch. She’s crying. This is a no go.

She glances at my reflection. “We killed her. We got greedy and killed her. It was our fault.”

I’m riding the bay mare through the sagebrush on my dad’s ranch, moving along the deep, cottonwood-bottomed draw that splits the property. She’s trotting out nice. Those long legs covering ground. We’re headed to the wall, making a big circle, gathering cattle and pushing them into this same draw. The draw like a natural cattle chute, as long as you can keep the cattle out of the trees, right on up to the ranch house. I’m thinking about cattle and then she snorts, jumps sideways, bends and sidepasses so fast through the brush it’s as if she’s running sideways. I’m trying to get a hold of her, bend her around. I’m not sure what spooked her, but then I do know because I smell it. The smell of carrion. I look to my left. There’s four of them in a clearing between the sage, stiff-legged, bloated, their shod hooves pointing right at me. Four old horses worth no more. I know what happened to them. Four bullets. No need to keep feeding them.

I was forty-one when I saw the girl with the fierce tattoos. The rain wasn’t pattering on my hardhat. It was on the windshield of my pickup and she had to turn her head to look at me. But she did smile. That part was real. That and the way she walked. And the tattoos. They were real. I just can’t remember what they depicted.

How did this happen? I used to be a bull rider. A goddamn bull rider. I used to slide up on my rope and nod my head. I’ve been knocked out, ran over, hooked. My shoulders are titanium, the rotted and pitted balls of them sawed off and replaced by new steel ones. I didn’t cry then. I wasn’t frozen and crippled by panic like I am now in this hotel room hours from my home and my girls. The bridge is still standing. I spent hours, days, months studying the plans. Making sure each run of rebar was in place, making sure each splice was tied. Confirming. Verifying.

Seriously, the bridge is still standing.

That might’ve been the last time I rode the bay mare. Or was it in the desert, after the big Soda Fire, when my wife was on the palomino and she flashed me? I took a picture. I have it on my phone. My wife’s beautiful breasts. College tits, that’s what her two friends call them. That sounds right to me. Although I never saw a college girl with tits that beautiful.

Rex Adams lives near Marsing, Idaho with his wife and two young daughters. His work has previously appeared in Confrontation and Everyday Fiction. He tied for 1st Prize in the 2017 Idaho Writers Conference Short Story Contest.
← We’d Be Soldiers
Does this look like Chi? →