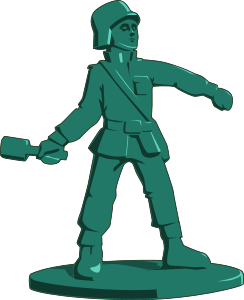 Our assignment was war. It was announced weeks earlier, and we’d thought of little else in the time between. The older ones did it all the time, but they shooed us away when we asked about it. Mr. Eriks told us to refer to him for the day only as Captain Eriks. Greg asked if we could call him Cappy, and Mr. Eriks said goddammit! He told us that he really was a captain in the wars that reset the world. He talked about the time before the wars often and with disdain, spitting and wincing like his mouth was filled with shards of bitter charcoal. Some of us would emulate the spitting, and he’d smile, bob his head in approval. Now the day had come, and we were split into two groups, thirteen on each side. Team 1 and Team A. I was A. He’d be our leader, and Mr. Harris (Captain Harris) would lead Team 1. Our respective captains corralled us onto opposite ends of the field, a hundred yards separating the factions. Our captain spoke.

“In war,” he said. “In war.” He nodded and spit, pacing in front of us, tracing the etches that paved his treebark face like lines of sap. We knelt before him. “In war, it’s fuck them. You understand?”

“Fuck them,” we chanted.

“Fuck them.” Pacing and tracing and spitting. His voice pulsed thick and tarry like with cigar smoke, but he had no cigar. Pockets of saliva popped with his words. “The enemy? Those shitbirds on the other side of the field? They’re animals. They’re subhuman. They’re dickless pieces of shit, understand?”

Greg snickered. We were nine.

I liked dogs, but I knew what he meant. Still, those were my friends on the other side of the field.

They were my friends, and I wanted to kill them. I wondered if they wanted to kill me. From across the field, from Team 1 and Captain Harris, the wind gusted the hollow remnants of thirteen nine-year-old boys’ unison fuck them. I guessed they did. But it was a game, and we’d have lunch after. They were my friends, but I felt a stirring, a burning, a satisfying collective ache radiating from Captain Eriks onto me. It swarmed and tickled, and I felt my faction feel it, too.

The first cap popped, a fraction of a real gun’s crack. The second and third, ninth and tenth, pop pop pop. Fractions of real, fragments of real, whispers of the real wars that reset the world, that would reset it once more.

Benson, a friend I planned to eat lunch with, shot me. It was clear, plain as pudding, and despite the rules, despite what I thought I was prepared to do, I did not fall fairly. I could not.

I looked around. Nobody fell fairly.

I heard my captain in my head. I would not fall.

Benson shot again, and again I said, “No!” He shot until his caps were expelled, and I did the same. Ten feet between us, we shot until shooting was no longer an option. There was a moment, a flash, when decisions were made. It was war. We raised our wooden rifles from the barrels like maces, heavy stocks extended. I saw Benson’s look. I felt my own. I felt that collective from my captain. Fuck them. We charged and swung. Benson missed; I didn’t. The clack against the side of his skull satisfied, tremored up my arm, and I swung again, as satisfying as the first.

Benson went down, and I yowled a warrior’s cry.

Captain Eriks wouldn’t wince and spit charcoal when he spoke of me.

I heard the same clack of wood against bone chirping around me, somehow louder than the shouts and curses that went with it. I saw my friends fall, but not fairly. There was blood and there were tears and screams. I watched and as I watched the collective emptied from my gut and left behind a sickness, a nausea, a worm that wriggled with the wrongness. What had we done?

Captain Eriks saw it, too. He ran toward us and saw what he’d caused, how immediately out of control it had gotten, and I could only imagine his fear and regret. He’d tried to make it real for his students, and he’d succeeded too much. I hated him for it. My friends. I swore I saw the regret in his eyes as he ran toward us, metal whistle dangling from his cracked lips, screeching.

He stood before us and assessed. Three unconscious. Five rolling and moaning in reddening blades of grass. The rest brandishing wooden toys unfit for the snarls and rage that propelled them. The sound of breathing and moaning, of too much success. What have I done, I imagined our captain thinking. But then I saw his eyes and saw I was wrong and I didn’t want to be part of his collective and he said:

Cade lives in Las Vegas with his wife, one-year-old daughter, hellhound Cane Corso, and orange tabby. He teaches writing at UNLV and is a hot-sauce connoisseur, craft-beer enthusiast, and hobby tabletop gamer. His work has appeared or is forthcoming in After the Pause, Typishly, and Scarlet Leaf Review.
← Piss-ants
In the Bar Ditch →