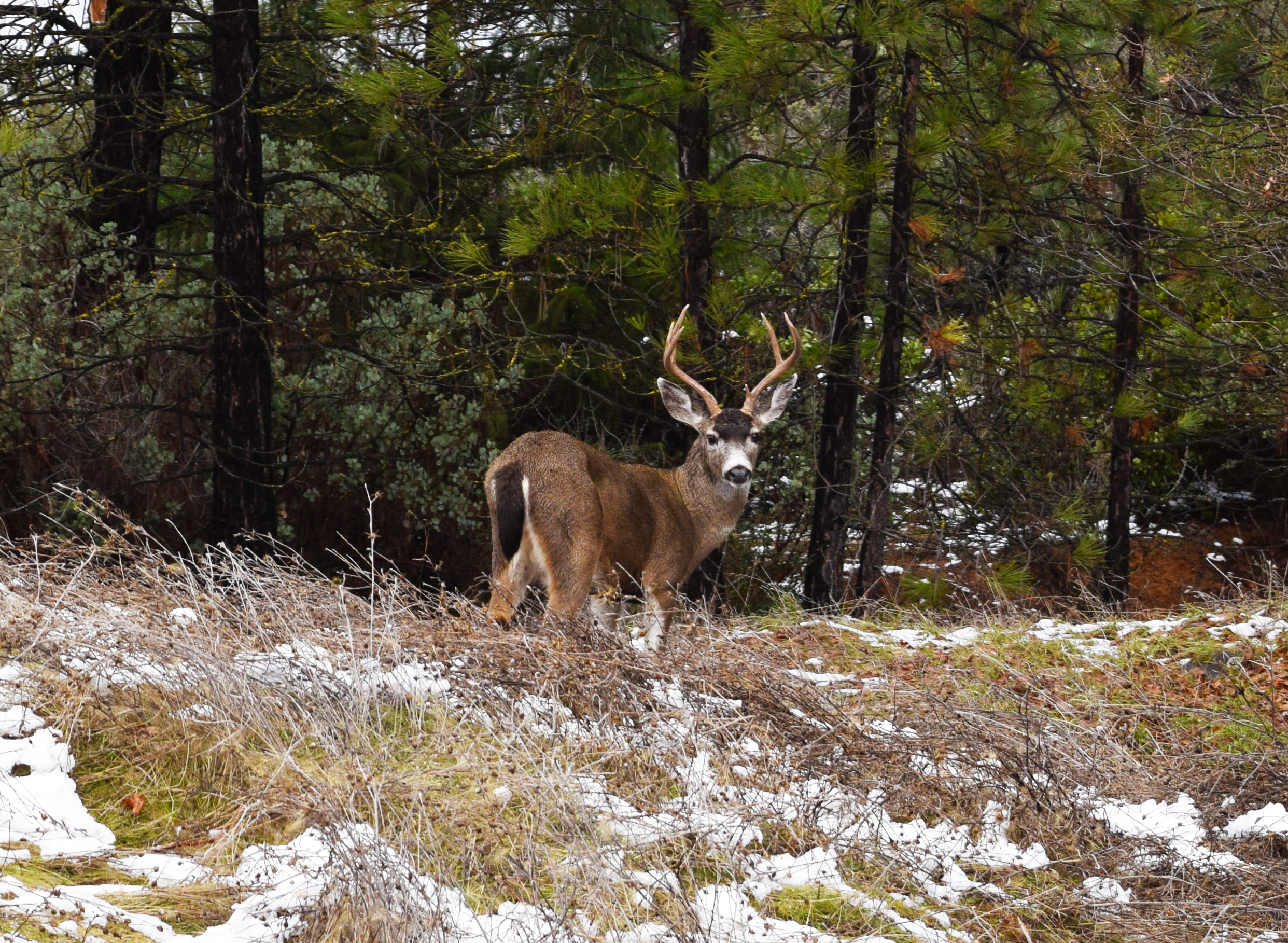 In the second week of the stay-at-home order he shot his first deer. It was the first deer of this strange time at home and it was the first deer of his life. It was a young male, a spike buck, and its antlers were thin and reedlike. Kneeling by the animal on the ground, feeling the thin hard things in his hand, he imagined them hollow, so that if he snapped them from the skull he could drink with them like straws. They were three inches long, or four inches, whichever was the limit where he lived.

It was the first deer of his life. He had hunted for fifteen years but had never been a hunter. But he had memories of hunting, and he had dreams. Stalking deer in the cold fall mornings, stepping slowly, bending to the hoofprints in the hoarfrost brittled leaves. Just the strangeness of walking the woods with a shotgun in your hands. Even now it was strange to him. Or sitting in the makeshift blind of woven beech branches, the beech leaves the only leaves not fallen in the woods, and scratchy when the wind blew. Thinking always of the wind, questioning it with matchsmoke. Or poling through the reedy shallows hunting ducks, seeing on the banks of the stream that fed the pond the many pickerel laid out by fishermen, unwanted in the dewy sun.

But it was the deer he thought most of. Always the deer. He dreamed of them and he also saw them often. In the woods, in his yard. They liked the crab apples that bloodied his lawn in fall and in fall it was hard to find clear footing between the tidy little piles they left, that leapt from them wherever they stood or even as they ate, no crouching nor straining like the awkward apes that haunted them, and whom they haunted by the simple fact of their existence.

But now it was spring. The days at home stretched on monotonous and unchanging in their makeup though not in the world that held them. For it was spring and through the window by which he worked he watched the world turn green: the pleasant yellow-green flowers of the maples hanging softly; the outflowing of leaves from the apple trees. Lambsquarters, sumac, buckthorn, bittersweet. Even the grass, the grass was greener, and the sun fell on it warming it and calling him to walk upon its plushy softnesses.

Beside him in the little room that was their office, his wife sat by another window. Hers looked on the road. The road much peopled now with walkers, with runners, with bicycles. She snorted when she saw them. These people who would otherwise be at the mall, these consumers, now forced to enjoy what had always been easy for the two of them, had always been obvious to the two of them to enjoy, but now had been taken away or at the very least made menacing, was now like bouncing between the rails of a billiards table. The road, the woods, the waters: all full of bodies now and of this thing they might be hosting hidden.

And it truly was hidden. He once heard her saying, in a day after little sleep, “Where are you? Where are you?”

“The virus,” she said. “Isn’t it the strangest thing? So much effect from something you can’t even see. How do we know it’s even there?”

He couldn’t say. He had had the same thought once as he stood by the main road of the town, no cars on it, in the middle of the day. And looked down the quiet road and its empty lots, and he had looked for it, strained his eyes to find it, and he too had said aloud though there was no one there to hear him: “Where is it?”

She would walk their road regardless. Her friend joined her sometimes and from these walks especially she came home happy and refreshed. “Just to be close to someone, to another human,” she would say. “Someone who isn’t afraid of you. Oh, just to be normal for a few minutes.”

But bad times came also, often at night. And she would speak to him of the friends they could not see and the things they could not do and their parents aging hidden away in their homes, what little days were left to them now theirs alone, unshareable, and all-too little.

She went days without sleep sometimes. He would turn in their bed and reach for her finding only her half of the blanket bunched up. A cold bed without her. One morning he woke to a rattling that he felt through the floor and he came downstairs to find her chanting in her bedclothes. He watched her without her knowing, and he thought: Her sadness shakes this entire house.

When later he asked her about it she said, “Oh, that. That was the sound of the universe.”

“The sound of the universe.”

“It’s supposed to wake you up.”

He thought back to the quiet road, the empty lots. To the deer which, like a dream, had so swiftly visited him, had so simply and without ceremony given itself to him after all his years of trying.

He nodded. “It is a little unreal.”

“It always has been. It isn’t even it. There is no it. That’s what no one sees. This virus is the teacher, to show us what we couldn’t see before.”

“So these vibrations you’re making.”

“Yes! That’s exactly what they are. They are the sound of the void. They join us with the creator, with the nothingness from which we try to make all this somethingness.”

And she fluttered her hands about. At the somethingness he supposed. Or the nothingness. He did not understand her.

“We are all part of the deal,” she said, with a finality that left no room for further questioning.

At the start of the fourth week he took another deer. He tracked it through his yard bending to its hoofprints in the dewy grass and, after he’d shot it, to the blood that dappled the white petals fallen from the apple trees. This deer was larger than the first, its antlers branched once. They took the place of the other’s antlers, those hollow pointed straws, on the coffee table in their living room. Not joined, but simply replaced. Its meat replaced the other’s in their freezer and on their dinnerplates. An earthy, almost foul taste, but familiar: an instance of a class he’d come to know by way of friends, of uncles, of all the men he’d known who hunted and were truly hunters.

And he wondered if he was a hunter now, after this second deer. Who would argue it. Who was there to tell it to besides his wife. They sat together evenings in the living room, sharing a bottle of wine, and he would look at the antlers and wonder about it. He felt at once that he was a hunter and that there was no such thing as hunters, that everything was just as it was and wanted no naming by him or any other. He had never thought this way and he wondered if perhaps her chanting had vibrated such thoughts into him. He mentioned it to her and she said, “Yes, maybe so. Maybe so.” And he could not tell if she meant he was a hunter, or that there was no such thing, or that yes in fact the very universe spoke through him now. And then she said, “I cannot do this any longer.”

“Well what then,” he asked.

She shook her head. And she cried. He put his jar of wine down on the coffee table, within the curling once-branched horns, and went to her. He rested his hand on her shoulder. She reached up and held his hand there, her own hand so small and thin on his, as insubstantial as a dream itself.

“It can’t go on forever like this,” he told her.

“You really don’t think so?”

“No,” he said, because it was the only thing to say.

But there was little consoling her. She started working less, some days not at all. She slept infrequently. In the mornings her chanting shook the house like a motor. Wake you from your dream, she had told him. The virus is the teacher. He felt she was losing her mind and it scared him. He needed her. He needed not to be the only sane one in the house.

She had bought their groceries until now but this too stopped, and rather than buy them himself he found they had enough to eat with just the deer. Though this was never the reason for his hunting. They ate the meat morning, noon, and night. The freezer never emptied and nor was it overfilled, even after he shot his third and then his fourth deer, in their sixth and eighth weeks at home. Each deer was bigger than the last and its antlers once-more branched, so that each pair of horns was like the tally of their weeks. The third he hunted from a blind of apple branches he’d woven together; the branches brittle and scratching, crumbling in his hand if he grasped at one or rested the barrel of his shotgun on it. The fourth from a canoe on the river not far from their house, among the reeds and along a bank lined with the shapes of fish, glowing in the dewy sun like strings of jewels.

But why was he hunting deer from a canoe. And why in springtime. He looked again for the shapes of the fish and they were gone. And then he knew: we live in memories. Even the moment between the seeing and the knowing you had seen was past. But memories were nothing new, they offered nothing. You needed a future just to have somewhere to live.

So in the tenth week when he saw the deer he merely watched it. Many-horned, incomprehensibly huge it seemed to shake before his eyes, to vibrate like the very resistance of electrons made manifest. Om or ohm. Om or ohm. He did not shoot. This marker of their weeks he would let live, and perhaps it would cease to come, and this dream of theirs would give way to another.

Derek Pfeffer lives in Massachusetts. His work has been published in Barren Magazine and Litro.

Photo, "Buck," by Bureau of Land Management California on Flickr.

← They Call Me Sack
The Witch →