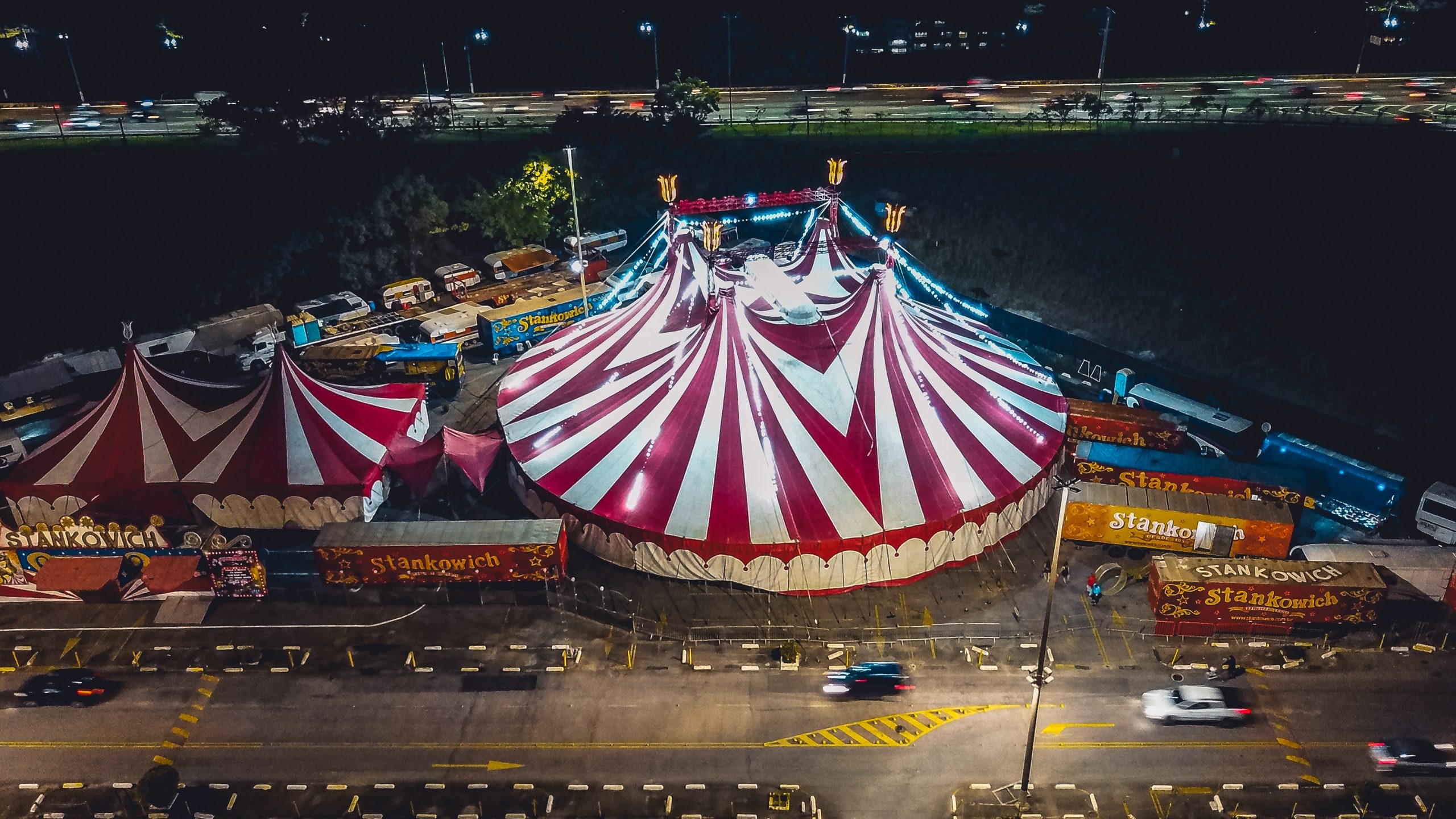 Here’s the thing—the clown isn’t laughing. He’s just sitting there on his stool in the center of the tent, sharpening his banana into a knife. This is after twisting together a balloon elephant and making my sister cry, popping it with a pin hidden between his teeth.

Just a balloon, Dad said, cracking a peanut. All a part of the show, kiddo. Just watch!

Dad knows best; he wouldn’t bring us to something that would disappoint us. Eat some more cotton candy, he says.

Who wants to fly? The clown is asking now as trapezists powder their hands. Where’s the net?

A few giddy volunteers are hoisted up. They go swinging, slung, caught by their ankles. One slips, doesn’t quite make it. A dull thud as lights go out. Clowns dance through the dark smeared in glowing make up, sleepy organ cranking while somebody cleans up the mess with a mop, leaving a puddle of mush in the middle. Weeping mother is ushered backstage by the ringleader. He removes his tall hat out of respect for her sacrifice, all in service of the show. His twisty mustache doesn’t flinch.

Now who wants to come down and put their head in the lion’s mouth? the clown says.

This time no one is volunteering. Eventually, a father convinces his son to not be chicken. Go on boy, give em a show!

Dads know best; they wouldn’t let the lion hurt us.

When the child, hands in pocket, places his head in the lion’s mouth he is nervously laughing. Because what else can you do with your head in a lion’s mouth?

Clown with banana knife gives the crowd a wink.

When the big cat’s jaw snaps it looks fake. Nameless boy’s body with neck nub makes no sound as it falls. Then there are trumpets and tubas and confetti in the air.

What a spectacle eh kiddo? Dad spits out a shell. I honestly don’t understand how they did that last trick but everyone is already clapping, so I put my hands together awkwardly. My stomach hurts, tied in triple knots.

Time for the finale! proclaims the ringleader, back in action. He snaps and they roll out a cannon.

How many kids do you think we can cram inside? he wants to know.

I hold my sister’s hand to let her know I’m here. I see it, too.

Other parents are pushing their kids forward now, urging them to climb the ladder and crawl into the cannon’s hissing mouth. They do even though it’s scary and most of them are crying.

When the man with the tall hat and inflexible mustache lights it a tongue of flame goes licking across the ring, spattering flaps red with specks, black powder residue, and little bits of bone and teeth. Then a spark catches the cloth, goes crawling along the tent’s skin.

Dad will know what to do; he wouldn’t let any of this happen.

When I turn to him, he’s sucking down a peanut. How many people do you know personally who have been murdered by a clown? he puts it to me as I watch people behind him bleeding, stabbed by a murderous clown with a banana knife. They sag, slip down in the cracks like deflated balloons.

There ya go! Dad smiles. Don’t be ridiculous.

The tent is burning down from the inside. We watch the head clown crawl into his tiny car with ten of his friends and zip away. Its little engine sputters along, tailpipe hiccupping exhaust. A bloody banana peel splashes down in a puddle in front of us, flung out the window.

Before I take my sister out I say goodbye to our parents.

His eyes are gone. A blankness: glassed-over sheen of swimmy blue. There is nothing there.

Wave goodbye forever, I tell my sister. Her shoulders scrunch.

We watch the tent burning from a safe distance. Smoke curling, poles collapsing. Sky red as a loon’s eye. Mom and Dad are sat smiling somewhere still inside. We can hear their hands on fire, clapping through the burning.

Bravo, Bravo! What a show.

Tomorrow there shall be another.

He is also the author of the chapbooks Infinity's Jukebox (Passenger Side Books), Escapologies (Red Bird), Book of If & Ever (Red Bird), and the following digital projects: In Search of, 13 Objects of Obscure Power, Adjunct, Writer: The Game, Are You There Internet? It's Me, Bolivia, and Totidem Verbis.

He has served as an editor, reader, or blog writer for PANK, Iowa Review, Ploughshares Blog, NPR's 3-Minute Fiction, Cloud Rodeo, BOAAT and Mixed Fruit.  He is a graduate of the Iowa Writers' Workshop and recipient of a Truman Capote Fellowship.   He has taught at the University of Iowa, University of North Texas, Wesleyan University, and Hollins University.

Photo by sergio souza from Pexels.

← Two Stories
Toy of the Season →