The Long (But Not Inappropriate) Goodbye

Fiction by David A. Gray 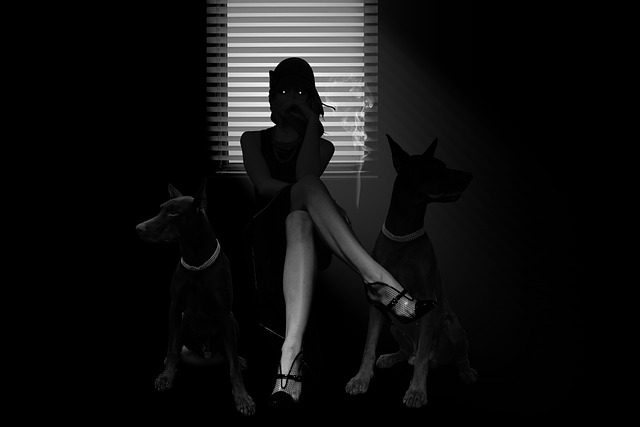 The door to my office burst open and in walked a blonde. A blonde to make a bishop kick a hole in a stained-glass window.

Let me say for the record that the bishop in question, well, he/she/they needs/need to get a grip on him/herself/themselves, maybe get some counselling. I have a number he/she/they can call.

In the past I might have declared the blonde to be a dame: that would be inaccurate and offensive not just to her/him/them, but to me as a feminist. She was a confident fem-presenting woman, and it’s not for me to say what a woman is, pal.

She was thinking. I could see, even on that short acquaintance, that thinking was always going to be a bother for her. But that’s ok. I’m not going to start slinging the “s” word around. I’m a smartass with a smart mouth, but I’m not book smart.

I mentioned she was a blonde. So what? Barney the mailman is a blond, and Flanagan the on-the-take Irish desk sergeant at the precinct house is a redhead. Me? I’m brunette.

And what if she was the kind of blonde who’s a gorgeous show piece who will outlast three kingpin racketeers and then marry a couple of millionaires at a million a head and end up with a pale rose villa at Cap Antibes, an Alfa-Romeo town car complete with pilot and co-pilot, and a stable of shopworn aristocrats, all of whom she will treat with the affectionate absent-mindedness of an elderly duke saying goodnight to his butler? I’d do the same, given half a chance, except I’d pay the butler above minimum wage and tell them we were on first-name terms.

The desk fan whirred lazily, bringing a waft of a new scent my way. She smelled the way the Taj Mahal looks by moonlight. That meant trouble. Which was fine: I like the Taj Mahal, and I like trouble. But not in a sexual way. Unless prior consent is given and there’s no power imbalance.

“Marlowe,” I muttered, introducing myself. This is the part I struggle with, as I don’t usually talk about myself in the third person. “His/him, he/his, he/he…” I tailed off. “You get my drift.”

I’m not so sure she did, but she rallied, and gave me a smile I could feel in my hip pocket. This was in no way her fault, but speaks volumes to the toxic upbringing I’d had, that some primitive part of my brain mistook a friendly gesture for an invitation to imagine copulation. I tried hard to think about the worst baseball game I ever saw.

“Mr Marlowe, I have a job for you… why are you sweating and blinking? Are you all right?”

“Keep talking,” I squeaked. “If that’s all right with you.”

She scowled, but did as told. I mean, requested.

“My ex-husband is having me followed. I was hoping you might be able to pay him a visit and… well, you have a reputation as a man of direct action and fast fists, Mister Marlowe.”

“These days are in the past, Lady, I mean Sister, no wait, Doll, no… “ I glanced down at my desk top, to the crib sheet taped there. “Madam or Ms. Anyways, I can pay him a visit and explain that his behavior is intrusive and threatening. I know a thing or two about sexual assault, and the consequences, let me tell you, and I’ll give him some facts to consider carefully.”

“That’s disappointing, Mister Marlowe,” she said, fixing me with a stare. “I wish I could persuade you.” She had eyes like strange sins. Which could have been caused by eye strain from a tough job for which she was paid 20 per cent less than her male colleagues.

“You might consider a cucumber eye mask…” I started, but before I could go on, her hands dropped and the overcoat she was wearing came open.

My brain slipped into neutral then stalled, but luckily my mouth kept going on auto.

“I fully support the right of a woman to wear or in this case not wear undergarments. And I can see the benefits of air flow, especially on a day like this, when the soft wet heat is like a pall around us. Me, I’m an old-fashioned guy and I like a thick layer of linen down there…”

She interrupted with a scowl. “You’re a hard man to persuade.”

I rifled through the book, which was out of her line of sight: she probably thought I was about to pop up with a bottle of malt, or would surrender and melt under the blowtorch of her charm.

I was up to something less fun, in the shape of my much-thumbed copy of “#MeToo Moments: Harder to See Coming than a Round From a Snub-nosed .38.”

There, in the margin, was a note from my counsellor, a worn-looking chump who went by the name of Sam Spade. “If uncertain, pretend not to understand.”

Now I was on familiar ground. I smiled to myself and started talking as I slid the book back in the drawer.

“That’s right, I am a hard man. If I wasn’t hard, I wouldn’t be alive. If I couldn’t ever be gentle, I wouldn’t deserve to be alive.”

I glanced up, expecting to see her buckling her coat before she caught a cold.

The office was empty.

“Betty?” I called through to my secretary.

“She’s gone, boss. Third one this week. Business sure has been quiet lately.”

Gray is a scots-born journalist who came to NYC "for two years", over a decade ago. He has two Brooklyn kids who think he sounds like Groundskeeper Willie. They're not wrong. His speculative fiction has appeared in dozens of magazines and sites, and his frst novel, Moonflowers (a tale of Armageddon-Lite), came out in 2019.

Image by ntnvnc from Pixabay