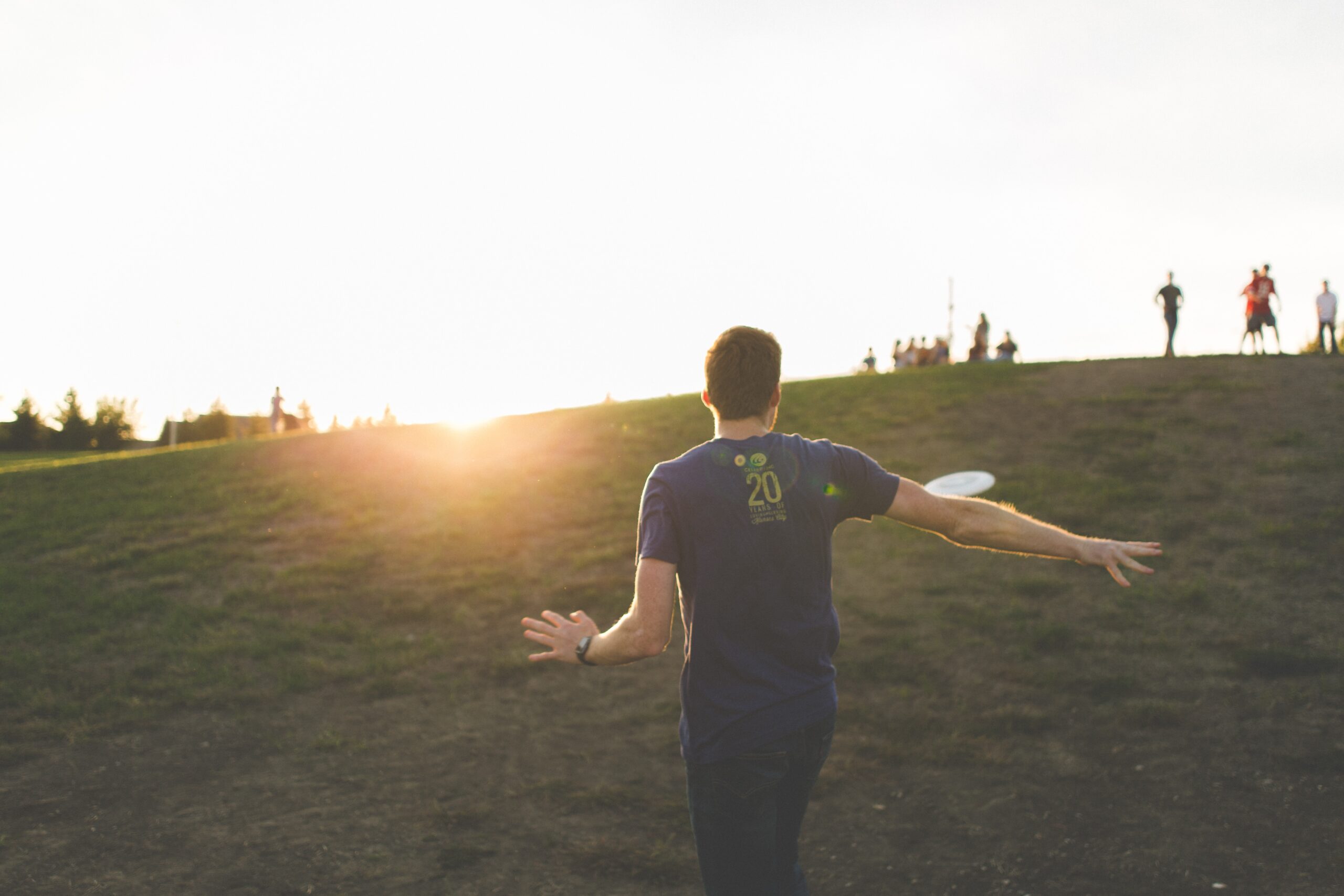 Alan told the priest in the latticed shadow, the bus driver in the afternoon glare, one coworker while the coffee percolated, and another when the copier broke down. What he felt did not letup. He booked a flight to New Orleans and told a shoeless man in the middle seat, a boy selling bottles of water, and a woman who sparked the trumpet. No damn relief. He stood among the city’s famous crypts, watched drop-outs toss a frisbee between the tombs, and wondered whether he was the only one who felt these dog days smother.

“Watch out,” one said after the frisbee glanced off Alan’s shoulder.

“Is it always this hot?” Alan handed him the disc.

What would these people call themselves? Certainly not drop-outs. The weatherman’s handmade jean shorts trailed thread down his pale legs. Sweat stains swarmed the belly of his shirt. The rest—a woman with four colors in her hair and a man twice the weatherman’s size—wore less: tank tops and nylon running shorts and sandals thin at the heels and toes. Was hippies okay? Free spirits?

Alan claimed he did not want to talk about his father again, but he couldn’t resist casting out the line even during natural pauses. He used, “I still haven’t heard from my brother” or “It’s almost the anniversary of my father’s diagnosis.” He said, “I’ve got some debt you wouldn’t believe.” But sometimes they only had to see his face and they knew. They asked, “What’s wrong?”

Again the frisbee bounced off of him.

“Heads up,” the rainbow said and smiled.

He could break the purple plastic. He could sail it over the monument’s fencing. Maybe he could stuff the disc between the cracks of one of these crumbling tombs. How badly did they want to toss?

“Okay,” Alan said and stood. He spun the frisbee toward her confusing cut.

They spun him into the circle. Rainbow to the weatherman to Alan to the big one. The big guy sang to himself. He did not mind stepping on the grass growing over a crypt. Around them, the dead spoiled. Or had. The tourists did it where Alan and his new friends could see—they turned up their noses and drew in their purses and huffed disgusted gas to each other under their breathes. Alan kind of liked being the target of their distaste. He shrugged at the first few and sneered at the later ones.

“I’ve got some debt you wouldn’t believe,” he said to the rainbow when she was close enough.

“I still haven’t heard from my brother,” he told the weatherman.

The weatherman shrugged. “Me neither.”

Alan had the words prepared. Refined. He used to say, “over borrowed” and “borrowed without double checking.” Now he blamed impatience. Easier to identify with. He was “impatient for pay day and should have waited.” He never said steal. He did not say dying. In the waning years, his father’s signature had become one line, a swoop and a curl. Easy to imitate.

They tried to catch the frisbee on the run. They threaded it through close crypts. In rows, the tombs were many porches, eaves and steps and fresh, blank doors. The tourists posed in front of them. They sat or squat. They smiled at the camera or gazed into the sky. One family had a tripod and a timer. The last photograph they took was “a silly one.”

Alan sailed the frisbee into the shot. “That’s silly,” he said.

“How has no one called the police on this circus,” the father yelled.

“Step right up. Step right up,” Alan called after them. “Funny pictures with the dead. Who knows what hilarious faces they are making.”

The heat did not only crush. It crammed. A fever fattened the air—at each of Alan’s shoulders, between his cotton shirt and slick back. Even in the shade of the mausoleums, Alan stood alone and felt crowded.

“Where can we cool off around here?” he asked the weatherman.

They liked open houses. They milled in the basement or back bedroom. Alan did not want to hide. At the second one, he left his shoes by the front door. He went through the kitchen cabinets until he found a glass and drank cold water from the tap. At the third, he tried to thread the frisbee down the hallway. Realtors stared. The rest gave him a wide berth. He planned to shower at the fourth, but the big guy saw someone or something that made him u-turn. He bumped into the rainbow and Alan and led the pack back the other way.

“Mary Mary,” he said and the weatherman cursed and the rainbow pulled a hat from her purse and covered her hair.

“Shut it,” the big guy said and the team high stepped north instead of west, stopped outside a convenience store.

“How does she know?” rainbow asked.

“Goldie told her,” the weatherman said.

“How does she know what?” Alan asked.

“I’m not scared of her,” rainbow said.

“Me neither,” the big guy said.

“But we should find somewhere to lay low.”

The weatherman and rainbow bounced into the bed. The big guy sat his head on the desk. Alan needed a cold shower and a new pair of underwear, but his portion of his father’s remains—the mortuary tech had divided them evenly—glowered next to the coffee maker. He had upgraded to onyx, gold bands. Had he forgotten they were here? He tried not to notice them, so his new friends wouldn’t notice them.

“We should have come here a long time ago,” rainbow said.

“What brings you to our fine city?” the weatherman asked.

“Where are you from?” rainbow asked.

“And you came here for no reason?”

“Why are we scared of Mary?” Alan asked.

“I have the room for two more nights.”

Alan watched rainbow find the words, her eyes aimed at the duvet but searching somewhere else. He didn’t think she had rehearsed.

“Her husband was a kleptomaniac. He knew better. He felt bad. But he kept taking things. From his friends. From her parent’s house. The last few weeks, I let him store some of it in my cousin’s garage. I didn’t look at what it was. I didn’t know what was whose. I didn’t even know he was sleeping there. My cousin found his body.”

The weatherman and the big guy looked anywhere but at her.

Alan said, “I came to New Orleans because I saw something on television about the way they celebrate death here. The parades. The bywater—”

The weatherman said, “It’s not really a celebration—”

“Death seemed easier to talk about here,” Alan said. “Nebraska is so cold.”

Rainbow hopped off the bed. She’d seen it. She reached like she might touch the repository but didn’t. “Who is it?”

“My dad,” Alan said. “I owe him almost thirty-one thousand dollars.” He’d never said the total before. He’d thought it millions of times.

Alan explained the details. How it started with buying himself a few extra groceries when bought his dad’s. How at some point he moved a lump sum. He almost used the word steal. He said withdrew. He said transfer.

“But he’s gone,” the weatherman said. “He doesn’t need the money.”

“He knew. He kept his bank statements on the bedside table. The last few weeks, he looked at me differently.”

Rainbow touched his shoulder before climbing back on the bed.

“I know just the place,” the weatherman said. “Grab your stuff.”

“Hang on. Hang on,” Alan said. “Let me shower. My clothes are starting to melt.”

What could anyone have said? Some were more comforting than others. They said, “Alan, I’m sure your father would understand.” “Alan, your brother would have said something if he cared.” “Alan, you deserved a little extra for taking care of your father.” They emphasized his name. They peppered any comfort they had with Alan, Alan, Alan. That was him. He was the one who had done this. His father have given him a family name. Some battered him with it.

As soon as he turned off the water, he knew they were gone. His luggage too. His wallet. His sweat stained clothes were still on the bathroom tile. The lid of the urn had been removed. What the ever loving fuck could be the point of that? But the ashes suffocated in their heavy plastic. Much heavier than Alan had imagined. And he had imagined and imagined and imagined.

Back in the cemetery, tourists needed the flashes on their phones to get decent pictures. Alan placed his father’s remains on the porch of a recently renovated tomb, a list of names in marble to watch over him. He stared into the onyx, the gold bands dull at dusk. So many memories, good, bad, indifferent, bloodied by his impatience. His choices. He had known what he was doing when he signed his father’s checks. He had not known how it would feel. How it would linger. He had not known who he would feel like once the account was empty and his father was gone. He had so much to say and he couldn’t find the words.

TJ Fuller writes and teaches in Portland, Oregon. His writing has appeared in Hobart, Volume 1 Brooklyn, Juked, and elsewhere. He can be found online @fullertj.

Photo by Josh Rocklage on Unsplash.