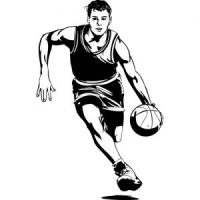 The old timers sat behind the bench, watching the players warm up before the game. The juniors and seniors took jumpers, worked up a sweat. The underclassmen mostly rebounded for them.

Around the old timers, the bleachers began to fill, people packing the small high school gymnasium as they always did on Friday night, on game night. But then this was something else. The All-A Tournament Classic Final. A chance to play at the state tournament, to go to Lexington and play at Rupp Arena.

Before long it’d be standing room only, people standing along every sideline, threatening to spill out onto the court itself.

Still, the old timers were given their space.

After a while, the official scorer, a middle-aged man with thinning hair and a salt and pepper goatee, sat down at a table between the two team benches. He taught geometry and algebra at the high school, and occasionally calculus, and he wore a blue sweater vest with the school’s initials in white, block letters: WC.

He flipped a switch on a control panel on the table, and the game clock on the scoreboard flickered to life. He set it to 15 minutes. Fifteen minutes to another tip-off. He’d seen so many tip-offs, stretching back some 20 years, to his very first in the very same gymnasium, when he’d worn a blue-trimmed jersey instead, with white, block letters, WC, across his chest, and white, block numbers, 15, across his back. It was one of the many jerseys that hung from the rafters now, above his balding head.

Two of the old timers behind the bench spoke arrhythmically as they watched the players form layup lines.

“What’s that boy’s name,” Earl asked. He squinted at the boy with his too old eyes and scratched his head, before motioning out toward a young brute with a beard, nearly six and a half feet tall, trying to dunk the ball.

“David, I believe,” Old Bull said, as David, the brute with the beard, didn’t quite complete the dunk, instead sending the ball ricocheting off the rim. Just watching him made Old Bull’s ancient knees ache.

Old Bull knew. Old Bull had coached them, after all.

The old timers stare stony faced from behind our bench, and I think they are frozen in place for a moment, amidst a sea of people threatening to crash down onto the court and drown us all.

We see their stony faces every day, every practice, watch them watch us.

This morning they were at our shoot-around. Coach gathered us up at the end, had them, well, just Old Bull, actually, give us a talk we’d been given before. How close they came in ’98. Why they failed. What it takes. Why finally it was our time. Finally, we’d get to state.

I try to shake their stony faces as I dribble up the sideline. I glance at the scoreboard. Less than a minute now. We’re up a point.

I can’t remember what Old Bull said it takes, but what I know now is that all it takes is time. We can run out the clock.

I glance again as I cross half-court. Seconds ticking, not literally, electronic seconds unmarked by sound. Seconds ticking like heart pounding like ball bouncing like cameras flashing like the eyes of old timers staring from behind the bench.

Their two guards swarm and I react too late. I retreat back and they trap me between half-court and the sideline. I cradle the ball like a football as they try to knock it away. I square my elbows and swing them freely, creating just a sliver of space. I am desperate enough that I consider trying to throw it off one of their legs, a playground play.

I am saved though, by a whistle, as Coach uses our final timeout.

As I hand the ball to the referee and start to jog towards our bench, I taste blood, blood coating my lips, blood falling from my hardwood head to the hardwood floor.

But this is nothing to the scowl Coach gives me as I join the huddle. Coach scowls like his old man, Old Bull, scowls. The old timers, the Dairy Queeners, the guys who gather at 6 AMs and eat the same breakfasts and recall the same good ole’ days that never happened, they call him Young Bull, a red, angry face like his old man’s, veins bursting as he screams.

I hardly hear him screaming at me. I glance again at the scoreboard, see time stopped. I look at the stony faces. I look over at the scorer’s table, where my math teacher counts down a minute, waits poised to sound a horn, poised to set the clock in motion again.

Coach diagrams an inbounds play on his markerboard, smashing the felt-tip of his marker into the board so hard that it’s more flat than pointy. The board still has a hole in it from when he punctured it during the Jenkins game.

Tolson will inbound. I’m to feint left and dart right, lose my defender with a deft push-off, just like coach taught me.

When play resumes, I feint and dart. Even though he knew it was coming, Tolson falls for the feint. He tosses the ball inbounds to nobody at all.

I fall to the floor trying to reverse myself. From a seat on the hardwood, I watch one of their guards scoop up the ball and streak down the court.

The old timers stood around after the game, kicking their heels against the well-trodden floorboards. A group of them, standing in a circle, a huddle, around Earl and Old Bull.

“Sure a tough one,” Earl said, shaking his head.

“That big brute nearly got us there. What was his name again?” Earl asked.

Over at the table between the two team benches, the official scorer closed his scorebook, filled with player names, names he recognized, sons of former teammates, sons of former friends, sons of men with jerseys hanging beside his in the rafters. He placed it in his bag. He gathered his things.

He finally turned off the clock.

The official scorer walked past the huddle of old timers, leaving the gymnasium, never once looking up.

Patrick Chambers is a PhD candidate in Literature and Criticism at Indiana University of Pennsylvania. His dissertation is focused on satire and religious skepticism in 20th century British and American lit. He is the co-founder of the literary journal Profane, and his creative work has appeared in The Adroit Journal and Crack the Spine.
← Atrial Fibrillation
Dog →