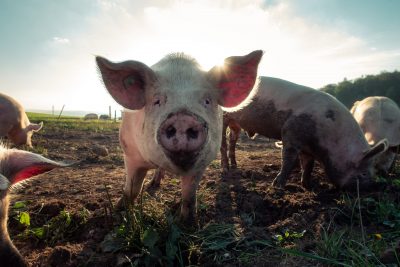 Wilbur Merit, commonly known as Porkchop, earned his living scrubbing dishes at a Yellowstone Park restaurant that locals called “The Mistake on the Lake.” Porkchop, who was bigger than a bread box and perhaps even a bread truck, had long, stringy black hair and a brambly beard that stayed filled with sprigs of salad, tangles of turkey, cocktails of condiments, and indescribable globs of biological matter purported by some to be chicken cordon bleu. Although he was damned to the dishroom due to a countenance not fit for human consumption, many residents of Yellowstone County considered him an awakened one, a burger-eating, beer-guzzling, belching Bodhisattva.

At present, Porkchop was scouring the remnants of a burned brown sauce from an industrial-sized pan using elbow grease and steel wool. He wished the cooks would pay more attention, but they were probably too high to care. So he just shrugged his shoulders and continued to scrub and rub. This was, after all, a tiny matter in the great cosmic scheme of the Sentient Hum; and Porkchop would not lose sight of the fact that he lived a good life in a beautiful place, and that his occupation kept him grounded.

Then Porkchop wrote a story about an intergalactic summit where creatures from around the universe met to discuss peace, harmony, and symbiotic enterprises designed to improve the lives of all beings in the broad expanses of space. At the time, many of the planets and even galaxies were at war with one another, and the future of life in the universe was unsure. But instead of talking about war and peace, the intergalactic ambassadors stood around joking about their various reproductive organs and where they were located on their bodies, causing everyone to laugh so hard they nearly burst their spleens or whatever equivalent organ they might have had. After that, they also laughed mightily as each ambassador flatulated from whatever orifice, tentacle, or gelatinous membrane his, her, or his-her species used for that purpose. The revelry caused the ambassadors to reach the epiphany that all creatures are basically the same, and the great, majestic universe was essentially saved by fart jokes. Although Porkchop never found a home for this story, he was sure its day would come.

Porkchop raised his hairy arm and checked his Smokey the Bear wristwatch. His shift was now over. He pulled his white plastic apron over his head and placed it on the hook beside the sink. He then punched out, said happy trails to his colleagues, and moseyed out the door. Standing on the loading dock, he smiled at the sight of the Absaroka Mountains, whose image was reflected upon the shimmering lake. He then strolled down a path through a stand of lodgepole pines toward the employee chow hall, where he would gobble down a jalapeno cheeseburger, saunter back to his cabin, and pound out the first draft of a story about a raucous intergalactic orgy. And tomorrow he would rise, and it would start all over again.

Photo by Pascal Debrunner on Unsplash