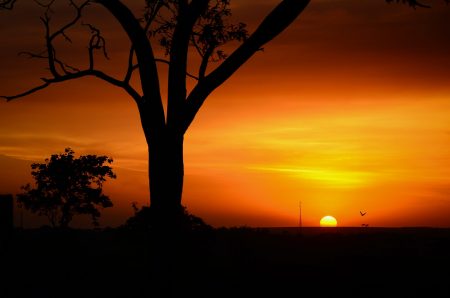 Eugene and Carol sat on their sagging porch outside the house they bought when they were young and oblivious to the permanence of this flyover country. Their land was hard, but Carol, at least, remembered when it had been harder. Hard in a way most had already forgotten. Maybe Eugene had earned some sort of uncounted blessing, she thought. The sweet freedom of forgetting. She looked at her husband, who vacantly watched the evening light hang itself from the black locust trees towering in the yard before them.

Helpless to her memory, like a staggering addict, Carol recalled a thousand warm days in the soft grass under those trees. Irretrievable days. Days so far in the past they could have been fictions—twisted into nonexistence by their distance from her. Watching Eugene absently smile at the dying light, she felt jealous and alone, and she stared at him until darkness slithered up the cracking boards of the porch and engulfed her.

“I hope God strikes you down,” she said suddenly.

“I hope God strikes you,” Carol repeated. “Smites you like he used to.”

“In the Bible times?” Eugene asked.

“In the Bible times.”

“What makes you think he’d do something like that to me?”

“Cause you deserve it.” Carol said. “And he kind of owes it to you.”

“How come you think I deserve it?”

“Cause of what you done,” she said.

“You know. And the Lord knows,” she said. “Ya’ll are the only ones who matter.”

“You seem to know enough to judge a man.”

He paused, trying to hold onto the thought, but Carol saw the light quickly leave his eyes. It was like watching the power go out in a house, rendering it black and empty and blank.

She hardly even had to search for it anymore. For the loss. She could picture the way his brow would tighten in angry lines as he tried to hold onto a thought before it disappeared—washed away like lowland crops in a swift spring flood with nothing but devastation to give.

He looked up at Carol as if he’d forgotten she was there: “How come just now you wanted God to smite me?”

She closed her eyes and considered this.

“You got different. Got ugly, in a way.”

“You ain’t much of a pageant queen yourself,” Eugene said.

“Neither was I. They wouldn’t let me in.”

“You could have been though. The equivalent.”

“Yeah. Could have been a prom king or something.”

“Never would have met you if I was a prom king,” he said.

“Would that have been better for you? Never to’ve met me?” he asked.

“I never said that.”

“Well, you’re the one wishing down smites on people.”

“Don’t mean I wished I never met you.”

“You still love me?” he asked.

“Then why’d you wish God’d smite me down? Over here calling down lightning on my head.”

“Cause right now I hate you, too.”

At this point, there was no reason not to tell him how she felt. They would sit on the porch until the stars peeked out from the clouded sky, and the next morning they would drive into town and a young doctor would tell her Eugene had Alzheimer’s. In the months and years to come, her husband would steadily rot from the inside. She hated him for it, and she often told him so. But he would not remember, and this was her only freedom.