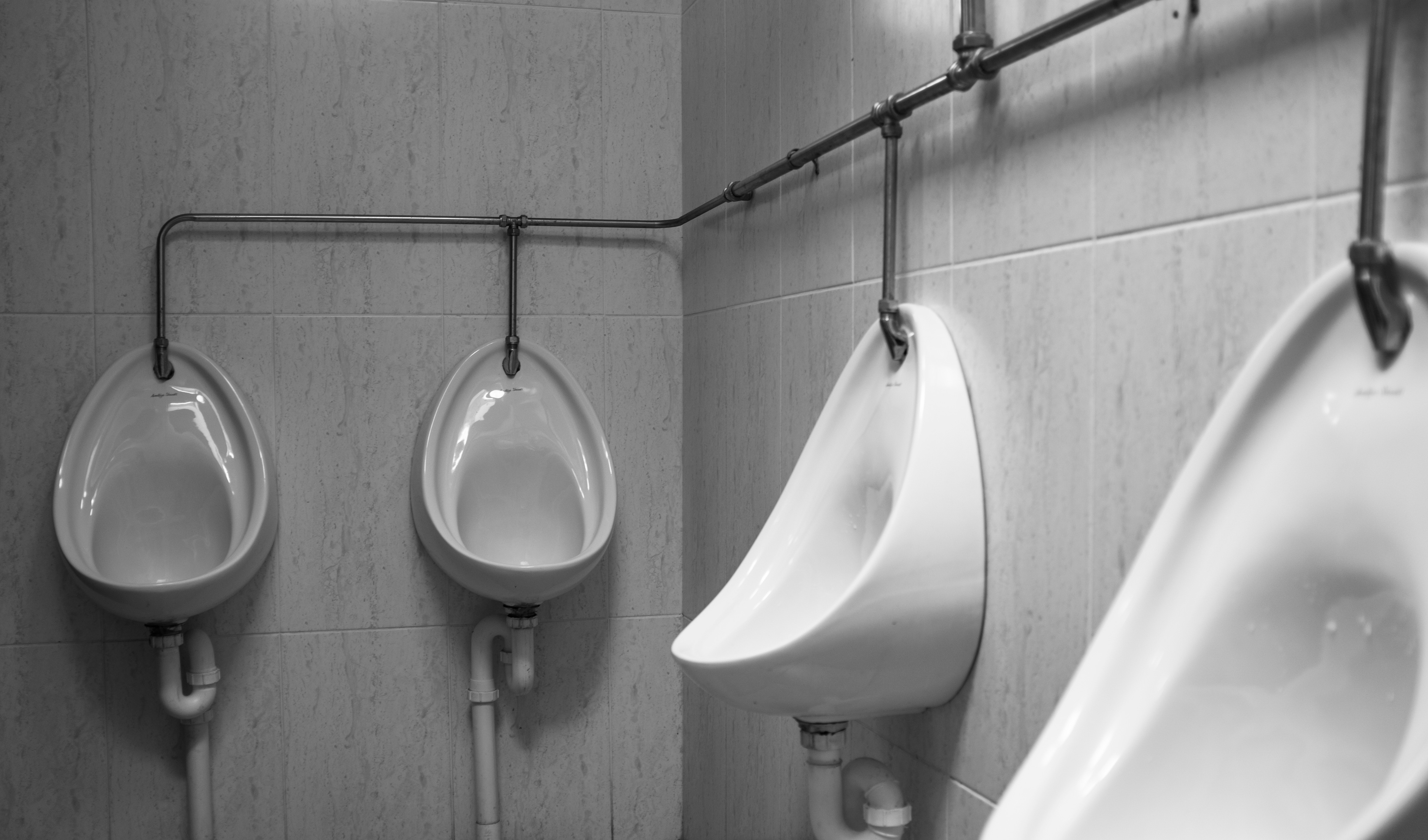 There are five urinals, intimidating in their ivory sheen. Rob waits in line with all the men in their football shirts, suddenly horribly conscious of being the only one not wearing team colours, and prays he gets to use number one or number five. At the end of the row, he’ll be able to angle his body away from his neighbour and just about fool himself into believing he’s alone. Then he can go. But if he ends up at two, three or four…

Denim shorts man at number four zippers up and makes for the sink.

Rob stares at his feet and pretends not to have noticed. He hopes someone cuts ahead of him, or that ripped jeans at number one or tan shoes at number five finish in a second and he can nab one of their places instead. But they don’t. Instead there are mutterings from the queue.

“Pisser’s free,” says Rob’s brother, Luke, from behind him.

Rob knows what will happen now. Or rather, won’t happen. He won’t be able to go. He can’t in these places. There was that bar a couple of months ago. All the cubicles were out of order. He ended up so desperate then that he just left and caught a cab home. There was the campsite where he’d had to sneak off into the bushes whenever he needed to wee. And there was that time, the first time, he thinks, when he’d gone in as a boy with his Dad, unzipped, looked up at his father, so towering, confident and masculine, and found himself so intimidated that he just couldn’t pee and had to ask to go to the toilet again five minutes later.

Head bowed, Rob shuffles to urinal number four, to the right of a man in a leather jacket. He unzips, stares at the grubby, cracked tiles, and waits. And waits. He tries to relax. He can’t. If anything, he justs gets more tense. Nothing is happening. How do other men do this so easily, shoulder to shoulder with their bits flapping out? Rob remembers his son, Ashley, who went just before him. He’ll be waiting for him by the sinks now, wondering what’s taking so long. He wishes he’d waited for a cubicle, but he hadn’t because he’d feared Luke would make some crude joke about it.

Tan shoes leaves and Rob considers moving over to his vacant spot, ignoring the pool of sticky piss on the floor, but the idea of everyone watching this is too embarrassing to contemplate for long and besides, here comes Luke. Rob hears the fzzz of his zip and, immediately, the shshshshsh of piss on porcelain. Rob’s bladder is screaming now, but he still can’t go. To his left, leather jacket grunts with relief. To his right, Luke is doing some grunting of his own.

Maybe he should grunt too? Perhaps grunting is some primal genetic catalyst that allows men to pee in public unashamedly?

Now Rob can feel leather jacket and Luke peering at him from the corner of their eyes. All he’s done is attract their attention. They’re onto him. They’re listening for the sound of piddle and they can’t hear it, and that’s making it even more impossible to go. He wishes he could just curl up and die, although maybe this wouldn’t be the best spot for that.

Rob casts his eyes downwards, where a golden stream is resolutely failing to fountain from his member. He feels impotent.

Luke zips up and walks away, but not before shouting: ‘Come on, Rob, what are you doing? The match is going to start again in a minute. Stop fannying about, can’t you go in public or something?’

Rob cringes and, not for the first time, curses his brother. Luke, who’s outshone him throughout his entire life. Better at sport. Better at attracting girls. And confident enough to piss in public toilets without a second thought. Rob remembers being forced to stand in muddy fields in the driving rain with his Dad, watching Luke score goal after goal for the school soccer team, Dad hollering, “You fucking beauty!” every time the net bulged. But neither Luke nor Dad came to watch that year Rob made the finals of the county-wide chess tournament, although given that he froze under the pressure–a tale that would become oh-so familiar–and ended up in checkmate after just a dozen or so moves, that was probably for the best. Besides, Dad thought that chess was “for sissies.” He’d said the same when Rob had plucked up the courage to ask if he could have violin lessons.

Then Rob recalls that Luke’s latest big-haired blonde girlfriend, Vicky, is waiting for them all outside, and remembers Rob bringing home a different girl each month during his final year, and his Dad grinning and saying, “That’s my boy.” Rob managed one single date during his entire school years. He’d been stood up and come home in tears. Dad had told him to “stop being so bloody soft,” that he should be more like his brother and, when Rob could have really used a hug, embraced Luke instead. Later in life, Rob realized he could count the number of hugs he’d received from their father on the fingers of one hand, and he certainly wouldn’t need all the digits. Luke, meanwhile, was smothered in fatherly affection for his achievements.

“Dad?” says Ashley, from somewhere near the sinks. He must have been waiting for ages.

Luke is with him, rolling his eyes. “Get a move on, you pussy.”

Luke laughs out loud. Rob glances over his shoulder at them and hates his brother, hates the influence he has on his son and hates himself because he knows he’ll never do anything about it. He also hates that he needs to pee so badly he’s seeing black spots in front of his eyes, but it’s not going to happen. He zips himself back up, bladder at boiling point and, trying to pretend nothing’s wrong, strolls breezily towards Ashley and steers him towards the door. I’m so casual, look at me, I’m normal, I’m like everyone else, he thinks, and then he catches someone’s eye and oh god everyone knows, everyone’s staring at the freak with performance anxiety, what a twat, what an utter, utter twat, and he feels his throat closing with stress and wants to just get out of there now.

“Hands, Dad,” says Ashley with a grin, remembering, at the worst moment, what he continually nags him about at home. Rob wants to burst into tears, but instead just nods and washes his hands as fast as he decently can, then ignores the driers in favour of wiping his hands on his slacks.

They step outside into the bustle of the stadium. Ashley runs off towards Vicky, who’s waiting with bags from the stadium shop at her feet. Presents for Ashley’s birthday. This trip to the game is a present too. Ashley loves sports. Sometimes Rob thinks his son was born to the wrong brother.

The young boy and Luke high five, then hug, in the sort of effortless way that Rob and Ashley have never managed between themselves, reminding Rob once again of all the embraces the younger Luke shared with Dad. These thoughts temporarily distract him from his need to go, but it’s not long until the boiling sensation returns.

Ashley untangles himself from his uncle. “Watching the game tomorrow?” Luke asks Rob. Rob says yes, but everyone knows he’s lying. Ashley and Luke catch each other’s eyes and smirk. Luke, almost imperceptibly, shakes his head, then reaches into one of the bags. He produces a soccer ball and hurls it Rob’s direction. “Catch!” he yells.

Rob, caught by surprise, can’t catch the ball. Instead it wallops him in the stomach. He tries desperately to control what is now uncontrollable.

David Cook's stories have been published in the National Flash Fiction Anthology, Spelk, the Sunlight Press and more. He lives in Bridgend, Wales, UK, with his wife and daughter. Say hi on Twitter @davidcook100.

Photo by HelpStay.com on Unsplash

← Frank, Start, Middle and End
We’re The Ones →