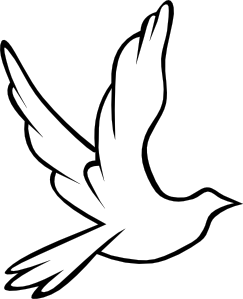 Peace Dove comes round, tell him John’s not home. Tell him he’s at Needle’s or the VFW. One of two places that John goes to which not coincidentally PD is banned from.

“John’s at Needle’s,” is the one you pick today, like a toe-caught tiger, eeny-meeny-miny-mo. PD shimmies up, peers over your shoulder: John’s in the kitchen making soup in his skivvies. Mustard robe flapping, splattered radio cranked, some ‘60s prog-rock on WFMU. John’s en route to an Italian Wedding with the still-good veg he dove the dumpster for.

Price-Chopper, John swears, they throw away the best shit. Like clothes-shopping at Salvie’s except with food. John knows the best days to score speckled brown bananas, used alligator boots released into the wild. John’s best days, if John’s being honest, are generally the days Peace Dove is not there. Best not just in terms of choice produce and duds, but also in terms of life overall.

“Isn’t that John?” PD points with his pinwheel wand. It spins thanks a burst of sour breath and foamy spit, out a rubber band mouth, avalanched by a beard. A wily beard depending from his jaw to his belly, which last saw a shear when Dick said he’s not a crook.

He’s got one bare foot wedged in the door, the other one muddying John’s WELCOME mat. He’s as stubborn as any old hippie can be. An outdoors plastic Santa lawn-complacent in July.

“I need to talk to John. Just give me five minutes. Five minutes, Lisa, then promise I’ll leave.”

Like that time he promised John a fly-fishing trip when he didn’t have waders nor did he have flies. Or when he said let’s go watch the big game when the game was rather small and also it was raining. Or how’s about that trek up to Sunrise Mountain, to watch the sunrise just like its name says? He’ll bring the coffee, John’ll bring the binoculars, now alls they need’s a car that neither of them has.

John’s saintly patient with crazy old P, but even the best carpenters run out of nails. John said Peace, what you need is a bird, a bird to take pity on your lonely-ass soul. And if John’s being honest, Peace Dove started crying, tears sputtering out his psychedelic eyes. Down his peace sign cheeks and flower child chin, bleeding the rainbow on his faded tie-dye. John felt bad so they did it anyway: watched the sunrise with the pigeons up on John’s roof.

Got coffee afterwards on the corner at Pronto’s, plus a kaiser roll with butter for $2.95.

See every small town has its own Peace Dove and a man like John who winds up his friend. And a woman like you, a waitress named Lisa, who John tipped at Needle’s and now look who’s his girl?

You look over your shoulder, look back at Peace, say okay Peace, what is it this time. You sigh a big sigh to let Peace Dove know just exactly how big a concession this is. It’s the first Saturday in a long long time by which some miracle you both have off. Not that you and John are doing anything really, but that’s the whole point. You don’t have to.

“It’s my bike,” P says, and sweeps back an arm, like Vanna presenting a puzzle, a THING. When is it ever not P’s bike, no need to buy a vowel, Pat you’d like to solve.

Behind Peace Dove is Peace Dove’s bike. Peace Dove’s bike is like no other. It’s a two-wheel parade, a fixie carnival resplendent, got fifty stars on it, one for every state, A flag off the back, a black P.O.W., red-white-and-blue streamers flickering on the handles. A milkcrate up front, rigged with bungee cords, stuffed with pamphlets about peaceful resistance. About love not war. About helping your brother. About violence in the end does not solve problems. He’s been riding these streets, handing out these pamphlets, since 1967, the year Jimmy died. In a war this country never officially declared, call a war a war if you’re paying in boys.

“Is it the chain again?”

Jessica Bonder is an American fiction writer. She has published short stories in The Stockholm Review, FIVE:2:ONE Magazine, Split Lip Magazine, The Lonely Crowd, STORGY Magazine, and The Writing Disorder, among others. Website: jessicabonder.com Twitter: @jessbonder
← Fur
The Last Hours of a Hornet →