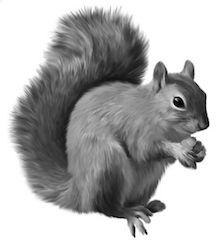 I jilted a lover once—I was caustic, young, and cold and I didn’t think things through—and a few days after the jilting this lover left a dead squirrel on my doormat, a chubby and fluffy Eastern gray slashed open at many angles to dispel the calm of a silver-lighted Sunday morning in mid-October. The doorbell rang and I stepped outside and bloodied my sheepskin slippers in dead squirrel parts. I saw her Volvo speed off, filling the street with the goosey honking of its horn. I wrapped the squirrel carcass in the ruined doormat and tossed both in the trash. I didn’t know what else to do.

I figured she left the first squirrel to shock and wound me. I mainly figured this because it worked. Squirrely got a raw deal, but I deserved something: the shock of a cute dead thing, the ruination of my favorite slippers. I had been a jerk and now I was chastened, and I resolved to be less of one.

I was surprised when the second squirrel came exactly one year later, this time without the fanfare of ringing doorbells and honking cars. The following year, she sacrificed a third squirrel to the same dark Gods of memory and resentment and delivered me the offering. After that, I bought a plastic doormat I could clean with a hose. Dead squirrels four and five arrived annually according to her bitter pattern.

But the sixth dead squirrel was different. It didn’t look different—see one fuzzy bloody pile of tail and intestine and you’ve seen them all—but the context made it so. See, the squirrel-deliverer and I had been getting along. She’d taken a job working in the building across from mine and we were occasionally eating lunch together. She told me she was dating a nice guy named Craig, had a new dog, a promotion, and a submerged talent for watercolors she was happily rediscovering. Things seemed to be going well. I never brought up all the squirrels because I didn’t think I’d have to. And yet when October 15th rolled around she commemorated it with another sciurine slaughter. I’d watched for her at the window all morning, but when she arrived she looked so chipper and at ease setting down the mangled rodent I knew I couldn’t confront her, break whatever spell guided her here. And anyway, the squirrel was dead.

Next time she saw me she greeted me warmly and we carried on like old chums. We ate sandwiches in the park where live squirrels darted about, moving happily unaware of the dangerous predator with the blonde highlights and a pink cardigan sitting in their midst. “Cute, aren’t they?” she said. “Big old chubby-wubbys.” My silence on the matters of these chubby-wubbys was rewarded with the continued pleasure of her company, and a seventh massacred mammal.

And in the 364 days between the dispersal of dead squirrels, we grew closer still. After the ninth dead squirrel, we tried dating again. After the tenth, I proposed. We wed two weeks before number eleven arrived.

Everybody says a successful marriage is about compromise, and here’s ours: every year my wife leaves a dead squirrel on the doorstep to show me she is fine, and every year I pretend I believe her. Those are the conditions of unconditionality, of loving someone no matter what, even when “no matter what” has a body count of eleven dead squirrels.

But acceptance is one thing, hope entirely another, and I got a very simple hope: that some Sunday in mid-October, it’ll be my wife standing pert and kindly outside the door instead of a lumpy and eviscerated squirrel. I’ll open up the door and we will hold each other and she’ll look at me with her shimmery jade-hazel eyes full of forgiveness or forgetting—I won’t care which by then—and say, “Oh my love, my darling, I have no idea what those poor little squirrels ever could have done to make me so upset!”

But until that happens, every October there’ll come a morning that finds me rinsing fur off my doormat, scooping up the pieces and feeling grateful for everything I’ve got.

Samuel J Adams is an MFA candidate in fiction at Bowling Green State University. His recent fiction appears in New World Writing and Rubbertop Review. He encourages you to follow him @Bib_Zone

← Homer Postcard & Victim of a Crime
Peace Dove Comes Round →