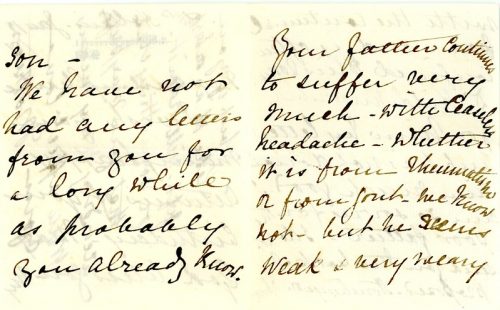 I am sorry to do this to you, but I’ve left your mam. We talked all morning and decided it’s for the best. There’s nowt between me and Tiffany anymore and being here is doing my head in. I am sorry to be leaving you in it, mind. I do realise how unfair it is to expect you to look after her on your own. I’ll be gone by the time you get back from school.

I can keep up with your doings on Facebook and Instagram, so that’s not so bad as it would have been back in the day. I’ll have to move to another town, see, somewhere I’m not so recognisable. But the reason I’ll be staying in Yorkshire is in hopes that you’ll visit sometimes. When I’m settled, I’ll send my new address. I’ve no plans yet.

I want to say that Amybeth was a lovely girl and I’m still really sad about what happened to her. I know you are too. She didn’t deserve it. I mean, nobody does, but especially not a lovely, smiley, pretty little angel like she was.

I did grieve for her. I’m still grieving for her. That time was difficult for me in other ways, too, though. I tried to support your mam and you, only the doctor put her on all those pills, which must have been really strong—well, they are—and I don’t see her coming off them anytime soon. I can see why she wanted them. Reality was unbearable. It’s made it hard for me to connect with her is the thing. I don’t know what she needs from me, how she’s feeling, or owt.

What it is, though, is that I don’t think I can get over all that Amybeth stuff while I’m here. Because I wasn’t just sad that she was dead, and I wasn’t just trying to look after you two, I also had to deal with everyone’s suspicion.

Sorry—this note is turning out longer than I expected. Looks like there’s more stuff that I want you to understand than I thought. I hope you don’t mind that I’ve took the pages out of one of your old maths books. I couldn’t find any other paper.

I’m not sure what use I’ve been but I hope it did help that I stayed. Otherwise, what’s the point?

Any time a kid goes missing, if her mam’s got a boyfriend, they always reckon it was him done it. We all know better now, but back then the whole world was sure I was a child murderer. They thought they knew why I’d done it, too. Didn’t help that the cops kept having me in for questioning. Then when her body was found, with those awful injuries, it got even worse.

I knew I hadn’t done it, and I suppose those two girls knew, and I’m pretty sure your mam did too, though it was hard to tell what she was thinking or feeling. As far as anyone else was concerned, it must have been me. I don’t know what you thought, what with Tiffany sending you off to her sister. Doesn’t matter anymore. There’s no point you feeling bad now if you were scared of me for a bit. I get it.

The worst thing was, they were all saying I must be a pervert. For fuck’s sake – a four year-old! You’d have to be one sick fucker. But I guess those things do happen, so those bastards must be out there, which is why folk thought I was one. You were too young to know about sex stuff then, but these days you do. You know I’m not like that.

The papers didn’t help—reporting every time the police turned up for me. Telly, too, and online. They shouldn’t have dug up my criminal record from before I met your mam. They made that look much worse than it was. It was just Community Service stuff. I only ended up inside because I lost track of the hours I was meant to do. ‘Violent Criminal Record’ they called it. I mean, yeah, I’ve been in a few bar fights, mostly when I was a squaddie. That was what we did when we came home. Then I was drinking too much when I got out of the army, so that’s why I nicked that booze. I’d had to move back in with me nan, and you know how things are with me and her. Since I got out of the nick, I’ve been a moderate drinker. You know that. I’ve been clean and straight.

It’s easy to lose sight of your life sometimes. Try to learn from my mistakes, Grant.

The cops gave up on me soon enough, because they had no evidence, but if those two girls hadn’t have told that mate of theirs what they’d done to Amybeth, and if she hadn’t gone to the police, the press would be printing insinuations about me to this day.

Her funeral was horrible. You were best off kept away. I know you don’t always think that, but you were. It was a nice gesture for them to do it in the cathedral, but that made it worse for me. It would have looked bad if I hadn’t gone, so I had to, but it was grim walking past those crowds, with every one of them looking at me funny. I’d rather have crossed another mine field. I don’t feel like I really said goodbye to Amybeth, too busy keeping my head down.

I don’t know if your mam was even aware I was there, or that we were in that grand cathedral, or what the bishop said, or the cameras, or even that it was Amybeth in the coffin, or  owt at all.

It was a relief when those girls were arrested. Then there was the wait. You came back home, but none of the mams would let your mates come round here to play, you always had to go to them. Then, months later, the court case got the wider world interested again, going over my convictions, printing my photo.

Thank God those bitches were found guilty and locked up. I suppose secure mental hospital is the right place – but part of me wishes they were doing time inside, really suffering for what they did to Amybeth, what they put the rest of us through.

To be honest, I would have left here years ago if things hadn’t happened the way they did. These last few years, I’ve stayed because I didn’t feel I could do owt else. I never wanted to be the man who left that poor woman after her little girl was murdered.

When I met Tiffany at the Social Club, I thought she was a great laugh, but I never dreamed I’d still be with her almost four years later. I was dossing on Lammo’s sofa back then. It made more sense for me to move in here, ’cos I was spending most nights with Tiffany as it was. It was never a commitment. I’ve not pretended to be your dad, have I? Tiffany understood at the time, but now I can’t always tell what she understands and what she doesn’t, what with the pills and that.

As it goes, I’d just applied for a job in Aberdeen when poor Amybeth went missing. I didn’t get it, so it makes no odds, but I couldn’t have taken it if I had done, could I? Not with all that going on. After the cops’d had me in all those times, I don’t suppose the offer would still have been there even if they’d wanted me in the first place. Anyhow, I didn’t apply for any more jobs up there. I stayed here with you and your mam, though now I can’t work out if it did any good.

You’re a good lad, Grant. I know school doesn’t suit you any more than it did me, but keep working at it so you don’t end up with no option but wars in deserts. Get yourself a trade, that’s my advice. I know I’ve not been much of a role model. Maybe I can do better at that when I get away from here.

I reckon I need to go and find a bus now. I’ve left you my Blink 182 CDs because you always liked them. Keep in touch. Look after your mam and look after yourself.

Rue Baldry lives in Yorkshire, Great Britain. Twenty-three of her stories have previously been published, or are forthcoming, in journals such as Ambit, Litro, MIR Online, The First Line, Mslexia, Postbox (twice!), The Incubator, The Honest Ulsterman, Overground Underground, and Crossways, longlisted for the BBC National Short Story Award, and shortlisted for the Reader Berlin and Odd Voice Out competitions. She has an MA in Creative Writing from Leeds University, was a 2015 Jerwood/Arvon mentee and the 2017 Bridge Awards Emerging Writer. Her novels have come second in the Yeovil, been long-listed for the Caledonian, Bridport and First Page prizes and shortlisted for the Flash 500 competition.

Photo by foundin_a_attic on Flckr