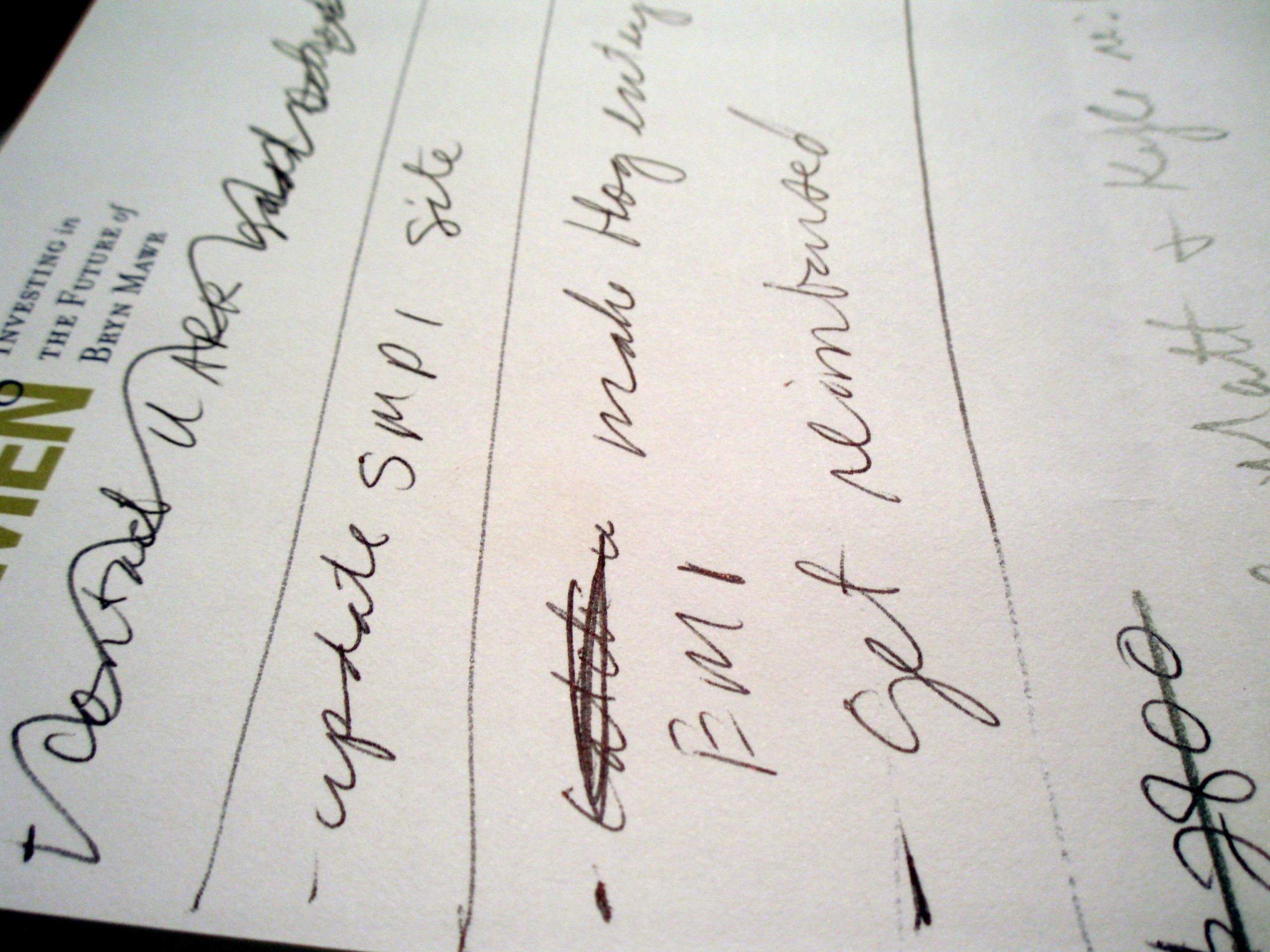 Everybody has to wake up, Henry. You just have to wake up a little earlier. It’s not unfair or fair. It’s just what it is. If you don’t wake up early, the whole day will be thrown off. Everything on this list won’t matter because you failed to complete the first task. But don’t think about “if you don’t get up early” or if you don’t do this or don’t do that. Jenny said not to think like that because what must get done, will get done. Thinking about things that haven’t happened won’t do anything about what must get done. Instead, focus on the goal. Work hard today so that someday, someday in the near future, you can make your wife happy and take her to Iceland. Remember this goal so that it will fuel your work. I know you don’t care about Iceland, but she does. And you care about her more than anything. That’s why you wake up when it’s black out. It’s not unfair or fair. It’s just what it is.

2. Go to the lumber yard to acquire the wood for the Seymour Project.

Try to get to the lumber yard at six a.m. That way you can avoid the large crowds of the midmorning. Plus, getting there earlier will let you start working earlier. Be sure to look for the specific grain of wood the Seymour’s want. Remember, Henry, it is a dark oak. Do not go over budget in order to get the wood. If you can’t afford dark oak, don’t get dark oak. Get whatever you can that looks dark and try to make the chairs fine enough that nobody thinks about what kind of wood it is. Instead, make people think about the person who carved the wood. But don’t think about that now. Just think about getting the wood, a sort of dark oak.

3. Go by the store on the way home and pick up something nice for Jenny.

You can’t afford something nice for Jenny. Maybe you can carve her something nice before you start to work. But you can’t do that because you should be working to finish the Seymour project. The sooner you finish the Seymour project, the sooner you can get two plane tickets for Iceland. Would she rather have something small now, like a pair of earrings or something; or would she rather have nothing but go to Iceland sooner? Anyway, think about getting something for Jenny. Can you do that though?

4. Work on the Seymour Project.

Start by carving the bases out of the dark wood you already have laying around the shop in large chunks. They are asking for twenty chairs. If you could carve out five bases tomorrow, as well as the legs for those bases, you would be in decent shape. If you could work at that pace, you could finish the project in two weeks. You’d still have to carve the rods and the top piece for each chair, but those are smaller pieces. Smaller pieces mean more time though, Henry, but smaller pieces also mean less to carve. Okay, it’s a one to one ratio, then. It doesn’t matter the ratio just get five bases and twenty legs done tomorrow. Fair.

5. Eat something and kiss Jenny.

6. Work on the Seymour Project.

Let’s hope that, by now, you’ve carved out the five bases. If you haven’t, then you’re already off track, and you will have to work a little faster now. But let’s pray that you have the five bases done, or at least not think about the possibilities otherwise. Now, carve out ten legs. That’s half the amount you need for the day. Remember, the legs may not be the first thing everyone sees on a chair, but they are the first thing everyone trusts on a chair. Make each leg elegant, but sturdy. On the off chance that someone does glance at them, make ‘em look trustworthy. If they don’t look trustworthy, then the Seymours will ask for their money back. If the Seymours ask for their money back, then each day, each day you woke up to a black sky, will add up to nothing. Make ‘em look trustworthy.

Call your mom. She will remind you to go eat something and talk to your wife. If you don’t call your mom, you may forget to complete these tasks, and your mom may forget about her oldest son.

8. Work on the Seymour Project.

If you aren’t on track by this point, don’t get overwhelmed. You have a tendency to get frantic when you get off schedule, Henry, but you must realize that carving wood, like carving out a life, takes time. Take that time and carve the chairs. They will get done because they must get done, and you will go to Iceland, eventually, ‘cause you must, for Jenny’s sake.  If on the off chance that you are on track when you get here, though, congratulations. You’ve made it this far because of focus and concentration. You’ve been disciplined, and now is no time to get distracted. Finish the day. Carve out ten more legs. Make each leg elegant but sturdy. Make ‘em look trustworthy.

No matter what, on schedule or off schedule, go inside and go to bed before Jenny falls asleep. You have failed to do this the past three nights. Each night you come in, and your wife is asleep. If you don’t start coming in earlier to spend time with your wife, there will be no future. If there is no future, the picture of Iceland can come off the fridge because it’s not your dream but hers. It’s Jenny’s dream to go to Iceland. She married you though. You don’t have any money to go to Iceland, even though it is one of the cheaper countries to travel to. Now, going to Iceland is your dream. Go to bed. If you don’t go to bed, you won’t be able to get up at five thirty in the morning. If… No. Jenny said not to think about “if.”

You can’t end a to-do list on nine because nine isn’t an even number. Ten is nice and square. Ten doesn’t wobble or shake. Just like your chairs, Henry, shouldn’t wobble or shake. They can’t wobble and shake. Besides, you need to remember to cross out number three, and you need to remember and do it now. Cross it out so that nobody can read it. So that nobody sees it and asks what you bought for Jenny. So that nobody knows you can’t provide for her. It is the last thing on your list, but it is the first thing you will do. That’s irony, Henry. That’s irony.

David Holden is a storyteller who works across a variety of mediums. His pieces focus on giving voices to the voiceless and are often experimental. Holden graduated from Grace College in 2020 with a degree in Interdisciplinary Studies. He is originally from Greenville, Illinois.