BULL Interview by The Drevlow 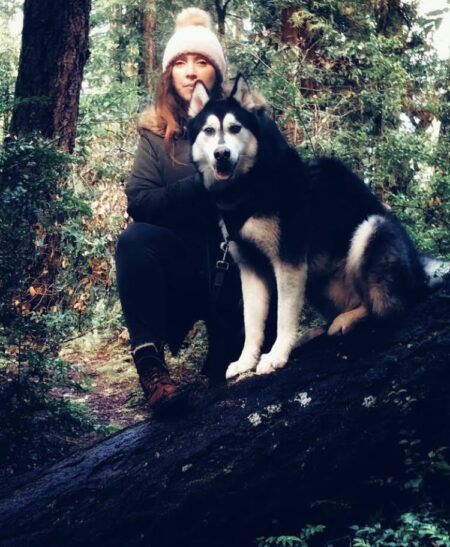 I’m going to be honest here:

I’m not going to be worth a damn for conveying to you how great and weird and beautiful and fucked up Kelly Gray’s new book Tiger Paw, Tiger Paw, Knife Knife is (forthcoming Quarter Press).

It’s mostly fiction with some poems and a lot of blurring the lines.

To try to summarize the plots or characters in these stories and poems is to spoil the reading experience. These are not mysteries, but they are about the mystery of the natural world with humans and animals trying (and mostly failing) to coexist.

And even in that last line, I’ve already done this book a disservice.

The “mystery of the natural world” is there, yes, but this is not “nature writing.” And besides, that’s way too cliched a description to do any justice to what makes these stories and poems brilliant.

For one thing: I kind of hate most “nature writing” no matter how “mysterious” the natural world might be.

Whereas I loved the shit out of this book.

Because it’s way darker and more twisted, more disturbingly delicious than a book about the “mystery of the natural world.”

Write to Kelly to thank her for writing this book and for all the beautiful nightmares you’ll have later and for how you’ll never look at a fox, coyote, or cow again.

The way that I thank Kelly for letting me read this book and then for having the following conversation to help me better understand her brilliantly twisted mind.

BD: So when a relative or, say, a friend of a friend at a get-together says, Oh you write stories? That’s so neat, then asks you what you’re working on right now, how do you sum that up? I’m thinking especially of a story like “Sylvia” but honestly it could be pretty much any story from this collection. (p.s. what kinds of looks/responses do you get)?

I found myself thinking of you having this conversation a lot while I was reading and smirking while imagining the responses (as someone who writes a lot of weird shit that weirds out and confuses most others).

KG: What do you mean “a friend at a get-together”? Ok, ok, sure, this does happen even though I don’t go out much. I’ve been known to feign language or hearing issues, run to the bathroom, anything to avoid this question. Sometimes, I say things like, “I write stories about nature,” which makes me feel like I have betrayed myself because that is not entirely true. The worst is when I try to be honest, and halfway through I realize I sound off. Just last week I had to have a conversation with my partner requesting that he not proudly announce to people we are just meeting that I just had a book launch. Inevitably, someone will ask me what the book is about, and what can one say? Systemic violence played out in animal form? Men being fucked by fox spirits which inhabit the bodies of their wives after a still birth in which he refused her the opportunity to hold the body? It’s awful to have to try to explain and I am sure worse for the innocent inquirer.

BD: Maybe I’m just not fully at one with my animal soul, but a lot of these kind of felt like mother nature horror stories (in a Guillermo Del Toro kind of way). I mean that in the best possible way. You have such way of getting at the beauty and terror of the natural world and then flipping it all on its head with the unnatural world. These all hit in such a visceral way. Do you see it as a type of horror? Or are you just letting the animals and humans frolic and fight and see what happens?

KG: Oh man, it’s easy to get pushed into a corner when you write about animals or “ mother nature.” I don’t ever want to come across as a hippy or worse, some white John Muir loving poet, and often feel myself squirming when folks want to discuss the nature aspect of my writing. I don’t believe in nature writing, and, in general, eschew genres.

A lot of what I write about I do not find to be scary but beautiful and strange, like finding a dead whale on the beach. There are so many narratives about what should be scary, but a dead whale seems like a wonderful opportunity to explore something that is rarely seen. I want to show you these things that exist and for me, are the magic of the world, just outside of the humans-only realm. If there is horror in my stories, it is how we are mistreated through normal physiological and/or cultural experiences, be it death or childbirth or abortion or sex, or just trying to exist. Where systemic abuse and violence lies in juxtaposition to our bodies unraveling into animal form is often the backdrop for my stories because it is where I have learned the most about what it means to be alive.

(In “Sylvia,” I wrote the birth scene to be minimally impactful. So much so, that friends who read it and didn’t have experience with childbirth wondered at the authenticity. I didn’t even want the emphasis to be on the death of the child, so much so that I gave the couple two babies to offset the reader’s desire to focus on that. All of this so that the real hurt was when he took the dead baby away and the mother was forced to grieve alone and without a body in her hands. For me, this story is about our separation from grieving alongside the natural decomposition process and natural cycles, which personally, I believe is another way of “othering us away” from what is real and worth our attention.)

BD: I have to ask this: What kinds of animal-kids books did you read as a child? Were there any that traumatized you and made you the disturbed writer you are?

KG: Old Yeller. Where the Red Fern Grows. The Adventures of Natty Gann. Anything by Jack London. You get the point. Horrible colonizer stories demonizing the wild, but so engaging when it’s your only view into the non-human world. I ate it up as a kid but now I want to undo that narrative to the best of my ability.

BD: I love the poetic point of view you have in your prose. I especially appreciate that many of the stories seem to have more of a poetic arc than a sense of the stereotypical approach to plot. I think it was Stuart Dybek who said that every short story he writes is a failed poem. Do you have a clear delineation of when you sit down to write a poem versus when you sit down to write a story?

KG: I don’t think about it quite like Dybek, only because he’s looking at it through the lens of clearly defined genres. I knew this book would have a hard time being published because it’s a hybrid work, meaning most publishers would look at it and think there are both short stories and poetry within one book, and that is a hard sell. Well, fuck that, and thank you to my publisher Chris at Quarter Press for seeing beyond that. I am only ever writing story. It can take whatever form it wants, and through revision yes, I might even get formal about it. I do love a well-crafted line break, and I believe that a prose poem should contain some element of fantastical.  But just because I believe something doesn’t make it true. The nature of this book reflects what I believe to be the nature of the world; within death is birth and even the act of birthing is dying. Separating them is an act of separating ourselves from the experience of existence, so I am not about to parse out poetry from short-story or impose plot or meaning where we are just observing moments in time.

BD: Speaking of point of view, your use of the second person is one of the most unique perspectives I’ve come across. Once we cross animal-human-supernatural beasts-mother nature-god lines, it becomes a real toss up in a lot of these stories of who/what is actually doing the bidding? Did you get that idea from someone else or is that something that just naturally comes out of your head?

KG: Thank you, that’s kind of you to say. Of course, I am influenced by everything that I have read and taken in, whether it’s oral storytelling or art or music. I can’t point to one artist or writer that I am following, but I will say that I think most of us have had one or more times in our lives where we ask ourselves who is doing the bidding here, and yes, that’s a good place to start or end a story.

BD: Lastly, what are your favorite animal/science/nature facts that you like to pull out at social gatherings?

KG: Why yes, I do, thank you for asking! I definitely have a personal campaign to inform the world about opossum vaginas, of which they have three. Well, usually two, until they decide to give birth, and then they make a magical third vaginal canal. If I am feeling really chatty, I will follow up with either the mating habits of whales (which are wonderfully queer and group oriented, and their penises are called Pink Floyds), or, I will tell you about flatworms who after mating can decide they don’t want to reproduce after all. So, they double over and suck the sperm out of their genitals with their own mouths and spit it back in their suitor’s face. TBH, I don’t know if they spit it back in their face, but in my mind that makes the most sense and is the most feminist punk rock sex move ever. If we knew more about animals, we would all be better informed about silly gender binaries, sexuality, abortions, birth and death, and may not be so uptight.

Kelly Gray (she/her/hers) is a writer, playwright and educator in Northern California on occupied Coast Miwok land, deep in fire country. She is the author of the poetry collection Instructions of an Animal Body (MoonTide Press) and the audio chapbook My Fingers are Whales and other stories of Cetology (Moon Child Press). Her writing appears or is forthcoming in Passages North, Pithead Chapel, Hobart, Under a Warm Green Linden, The Normal School, Barren Magazine, Maudlin House, Lunch Ticket, Superstition Review and elsewhere. Kelly's nonfiction essay "The Falcon's Cry" was a finalist for Best of the Net and she was nominated for a Pushcart Prize by Atticus Review. Her play, Beautiful Monsters, ran at the Luther Burbank Center for the Arts and was produced by Left Edge Theater in the summer of 2021. You can read more of her work at writekgray.com.