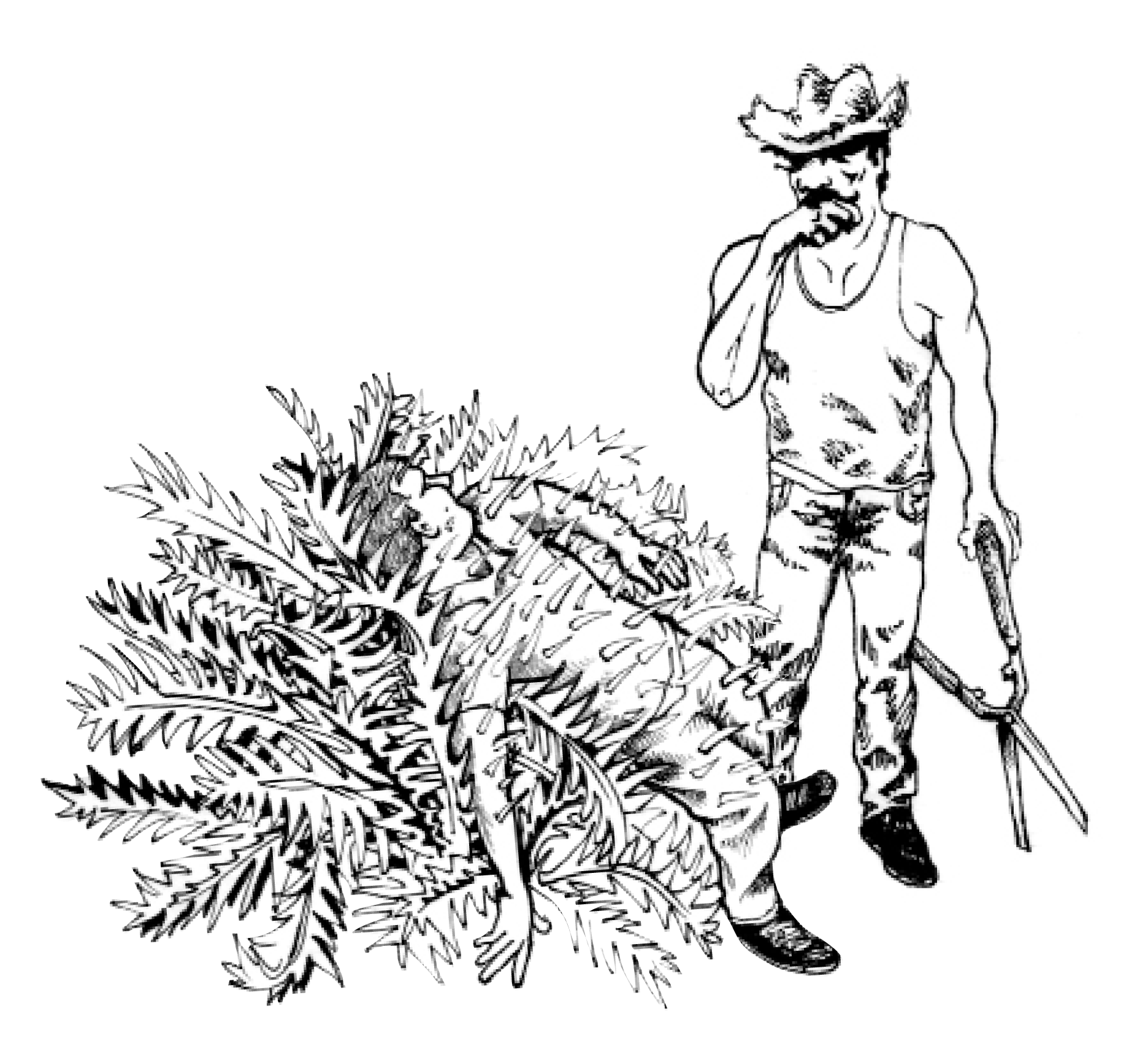 It was a bloodbath.

We crested the corner hill at sunrise, riding ten feet off the blacktop in the gray diesel pickup. The cab’s air conditioning vents blew steam off paper cups of coffee, but did little to raise the morning fog from the eyes of our fattened crew. The enemy hid behind neighborhood trees and knelt beneath manicured shrubs. They stashed themselves under cars at the curb and waited for our diesel to pass so they could hamstring us.

Mario’s scheme was to hit at first light, get there before whatever crew worked the street. He’d pick a block and we’d mow the lawns, trim the hedges, prune the trees, even tweak the damn sprinkler systems, all gratis at first. He’d laugh with a Spanish accent and leave a flyer on the porch when we were done, a promise to come in fifty dollars shy of the homeowner’s regular bill scrawled across the bottom in misspelled English. Our competitors would pull up as we drove away, have to explain to their customers why they were more expensive and less efficient. The next day we’d strike two blocks south. In a month we’d crisscross the whole territory, taking over one yard at a time until Mario owned another subdivision. It always worked.

Except the last occasion, on Emilita in Valley Village.

These guys wore grass-green jumpsuits and sat on tractors, Briggs and Stratton engines that purr and deposit their kills in heavy leather mulch carriers that leave not a single blade behind. Some of their riderless crew wore belts with holsters for small trowels, short handled steel rakes, and spring loaded shears. Too many of them carried telescoping pruning sticks, vicious spears that shred your guts at a distance of fifteen feet.

I blame myself for the carnage. My gift was for scouting neighborhoods, spotting lazy crews who’d lived too many years off a few square blocks, getting fat on flat lawns and drab landscapes. Emilita looked right. It reminded me of Bell Canyon and Mission Hills, cookie cutter communities where weak-willed gardening squads cussed under their breath as we shoved them aside with nothing but a menacing stare.

We were halfway down Emilita, though, before we realized the greensuits were waiting.

They positioned their tractors on all four sides of us while their foot soldiers filled the gaps and came at a run with weapons in hand. Mario coasted to a stop and cranked the CD player. Mariachi guitar blasted from sixteen inch speakers mounted outside the cab. He loved that shit for a fight. A brick arched through the sky and crashed against the windshield. Glass veins spread across the horizon, distorted our view and made the oncoming rush look like an alien invasion. Mario gunned the diesel’s V8 and rocked the truck’s frame.

The rest of us shook off the surprise, climbed into the bed and grabbed our gear. I kicked the tailgate down and readied my mower as fast as I could. Seconds later the greensuits were on us. A few of them fell, but there were too many and we weren’t prepared.

Jose and Ramon, twins from Guadalajara, hit the ground first. They stood shoulder to shoulder and swung their hoes wide, driving some of the greensuits back. I’d fought with these brothers before, had seen Ramon buckle a man’s knee with a low strike while Jose jabbed high and cratered the same man’s throat. They’d shove their victims aside and move through an enemy like a monster with four arms. On Emilita, they died in concert. Jose took the butt end of a pickaxe to the face, unhinging his jaw. His mouth dangling open, he stumbled to a knee. As the axe made a second pass at his head, he met eyes with Ramon, his twin bleeding out from shears to the jugular.

Revving a straight-shaft weedeater, string whipping at a wicked speed, Hector Soliz leapt from the truck and into the fray. His soft, round frame bowled over several greensuits, but the only thing Hector ever did well was eat and nap. He kicked the air with his fat legs and struggled to get up, a turtle on his back. They swarmed him, hacked at his giant gut and silenced the buzz of his weapon. None of us moved to help.

I tried to position myself with the rest our crew, but a burly, dark-skinned boy struck the side of my head with his spade. The blow laid me over the steering wheel, but didn’t take me out of the seat. My mower puttered down the road, out of the melee, and ran into a curb under a giant sycamore tree. Behind me I heard the howls of men being ground to mulch by steel tractor blades, but then the blood from my wound pooled in my ear and filled my skull with the noise of the ocean scraping against sand…

Josh DuBose is a writer/performer living in Los Angeles. While making a living as a freelance ghostwriter and content writer, he continues work on his own short story collection. A Kirkwood Prize for Fiction nominee and winner of the Peter K. Hixson Memorial Writing Scholarship, Josh’s work has appeared in Zyzzva, in the upcoming 2013 spring issue of The Tulane Review, as well as in Blustem Magazine’s 2014 print issue.

← Taping It Up
BULLshot: Josh DuBose →