They Called Me The Virgin 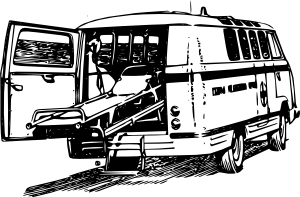 Stealing the ambulance makes me question if listening to Buster Knees had been the smartest move. But when I turn on the siren and stomp on it—hot damn, it’s so much fun to drive. The parting sea of cars makes me feel like Moses. Even though Buster seems mad I’m off plan, the thrill of it all has captured him too. From the back of the ambulance, he screams, “Hell yeah, Virgin! Put that pedal to the floor!”

If plans can take on a life of their own, I think it follows that they can have a birth and death as well. This particular plan was conceived in Buster’s studio apartment where the curtains blocked the light out as our enemy. Dust particles floated in the air, but we couldn’t see them hanging around until we lit a cigarette. While we smoked, we only saw the orange embers, and that’s when Buster would yell, “Light bulb, Mother Trucker!” A new plan was born, and we became electric.

When the pregnant lady in the back of the ambulance screams, when her husband gives me the what-kind-of-ambulance-driver-are-you look, I have to admit the consequences might be more significant than I had estimated. I have to agree it’s time to reevaluate some choices.

Buster’s place wasn’t always so dark. It used to be command central for four of the best professional online poker players in the world. He created this virtual empire by taking in three aspiring gamblers, guiding us through the math, and honing our skills of aggression. We became money generating machines. His apartment was constantly well lit. We’d each have thirty-two games going at once, facing simultaneous decisions like air traffic controllers, but if one of our tournaments crashed and burned, even though we felt like we had been responsible for the loss of lives, we would start up a new game and everyone would be fine. We found redemption in the law of large numbers. As long as we kept playing, we kept winning. I didn’t even know real names—just their screen names: NumberTwo, El_Jefe, and our boss, Buster Knees. They called me The Virgin.

I’d be twelve hours into a session, only a few tense hands away from a five-digit score, when Buster would break the ice by asking, “So why do they call you The Virgin, again?”

“Because no one can fuck with me,” I’d say, and then we’d high-five. Soon after that, I would win.

It was all good until the government shut the game down. When they froze the poker site’s assets, they hit well over three million from our crew. That’s when I lost my religion. That’s when the lights went out. NumberTwo and El_Jefe took off to Mexico where they could still play. Buster and I didn’t want to go anywhere. We were too American. We could only dream at home. So we stayed put and sat in the dark, crying about our money, aimless until the first time Buster yelled, “Light bulb, Mother Trucker!”

“Check it out,” he said. “All these cases where the police paid out for excessive use of force. Heck, this guy got money for getting beat up by a bouncer who was an off-duty cop. Some of these are six figures. It’s like the universe is showing us how to get our money back.”

So we put ourselves in compromising situations with cops and bouncers who looked like they might be cops, but we never got a civil case going. Instead, we just got our asses kicked. Then we sat around in the dark some more, in physical pain too, crying about our money until Buster yelled again, “Light bulb, Mother Trucker!”

But every day was long. Every new idea fizzled. Day Trading: we found out we were the suckers. Male Phone Sex Operators: we couldn’t stop giggling. Daily Fantasy Sports: we didn’t know shit about sports.

And then there was the glorious ambulance idea.

“We go right in for the sure thing, just like in the movies,” he said.

I was getting desensitized to Buster’s great ideas. I had started to lose track of them. This new one didn’t have my attention either until he said, “The banks are federally insured. It’s hardly stealing. More like taking back our own money!”

I heard that. That made me sit up. I was being invited back into the game.

“Wait—what about an ambulance?” I asked.

“The getaway car, Virgin. People expect ambulances to haul ass. They won’t see robbers getting away from the bank. They’ll just see an ambulance in a hurry like they expect it to be. Even the cops will let us pass. Think about it! It’s even better than that Ryan Gosling movie!”

“I think he drove motorcycles,” I said. “And wait—didn’t he get caught?”

“Come on, Dude,” he said, smiling that plotting smile. “Of course he got caught. They always get caught. But never the first time. Usually not even the second or the third. Their problem is that they don’t know when to stop—but it’s not our problem.”

“It’s not?” I asked, wanting to be convinced.

“No! We know exactly when to stop. We stop when we get our bankroll back!”
After I heard about the ambulance at his cousin’s body shop, I knew Buster wasn’t playing. When he said his cousin was facing bankruptcy and, for the right cut, he’d look the other way if we borrowed the ambulance, I jumped on board. Granted, I probably spent too much time thinking about reward and not nearly enough time with risk, but it’s also important not to overprice hindsight. We thought we had broken down every aspect of this plan, but a pregnant lady was never part of the deal. A thing like that belongs more in the Unexpected Turn of Events category. That’s the kind of scenario that makes wise players pass on a lot of moves, but sometimes the quality of decisions is a factor of available choices. It’s not as easy as it looks, folks.

So we borrowed the ambulance. I tried to get comfortable behind the wheel. I even leaned on the accelerator a bit, and while I didn’t have enough room to completely open her up, I saw what she was capable of. Everything about her was of a larger scale. I was so high in my seat, so far above the street, I felt exposed. I was sure everyone would see how much of an imposter I was. Buster didn’t see any problems, though. He was in the zone, practicing his bank robbing poker face.

We were still several blocks from the first bank when the frantic man ran right in front of the ambulance. He looked like he was really losing it, but not from me almost running him over. That didn’t seem to bother him as much as it did me. Something else was way more urgent. He had run into the middle of the street, in front of the ambulance with no concern for his personal safety and with some strange confidence that we were all exactly where we were meant to be. His faith was beautiful.

“What’s going on?” Buster asked, turning red-faced. “This isn’t part of the plan.”

Before I could get ahold of things, they got more intense. The pregnant lady joined the frantic man in the street. She had her hands on her belly as if they were the only thing keeping her baby in. I got a strong feeling these people weren’t going away, so I put it in park and jumped out to the street.

“Wow,” the man said. “You guys got here really fast. I just called.”

What a rush of pride. I felt like, for the first time in my life, I had finally done something right, something actually good. I rushed them to the back of the ambulance. I yanked my ambulance doors open for them.

“This isn’t the plan,” Buster said. “She doesn’t even look that ready to me. Ma’am, are you sure you’re ready? You don’t want to get to the hospital too early.”

The lady started to wail something fierce. She needed my help. I got her into the ambulance and on a stretcher. Their gratitude was overwhelming. Even Buster gave in and finally acted like a real paramedic. He messed around with the controls of some machine. Maybe it was just a bluff, but the basic ones were the ones that always worked out best for us. Buster used to preach about the dangers of fancy play. I jumped out of the back of the ambulance and ran to the front as if I had saved thousands of pregnant women.

In games of limited but rapidly changing information, you have to constantly adapt your strategy. The pregnant woman had forced me to consider if following Buster’s lead was the best move. But when I turned on the siren and stomped on it—hot damn—so much fun. The game wasn’t over. It had just changed. Cars pulled over, parting seas for their Moses. Even though Buster seemed disappointed that we were off-plan, our moment in the ambulance got to him too. He shouted, “Hell yeah, Virgin, keep that pedal to the floor!”

So I do keep the pedal to the floor. All the possible banks we pass, everything we go by is a blur. The outside world bleeding together, pulling away, rapid and unclear, the exact opposite to the inside of the ambulance. Somehow, that slows down. I listen to the frantic couple talking to each other, and they sound calm. Somehow, they trust me. I’m in the front driving, but my heart’s back there with them. I have to protect them. I want to. More than anything. This is real. We’re all so alive. I’m not a degenerate. I’m not going down like Ryan Gosling. I will take them to the hospital. I will tell the universe to keep the bankroll, just leave me the ambulance.

Al Kratz is from Indianola, Iowa. When free of the day job, he likes reading, writing, and lying around with the dogs.
← The Children of Charlemagne
Cutting →