The Sting of God 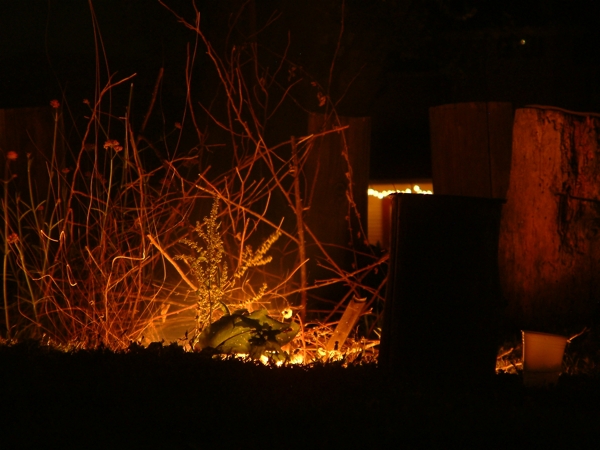 I don’t want to say it began with something so cliché as let there be light, but Eric Bischoff’s dad (whom we all called Mr. Turner and he called just Ted) started a bonfire in the backyard that lit up the whole neighborhood in pagan light.

We pitched a tent later that night. But not all of us could fit inside it, so we were forced to unfurl our sleeping bags wherever the ground lay flat. I laid mine out closest to the creek and farthest from the house, and I recall a friend of Mr. Turner’s booming across the yard, “I guess we got ourselves a real nature boy here.”

I didn’t know how I should respond to that, but I muttered the words as I rubbed my hand over a flat stone. Nature Boy did have a ring to it.

Lying on my sleeping bag, I listened to the still waters that weren’t really still and stared up at the stars. I thought, if you could corral them all in one place, you might call it a starrcade. I laughed at that. I had a habit, even then, of laughing at my own jokes. I looked around, but I was alone.

The bonfire had long been doused, and everyone had fallen asleep. But I was never one for sleeping. My head was always filled with apocalyptic visions—and I had drunk a liter of Dr. Pepper that day. So, I lay there next to the babbling stream, inventing new names for Famine, War, Death, and Pestilence.

Above me, the branches converged like rafters in a sweat-slopped arena—their barked edges backlit by a pale moon. A rustling began there and drifted down to the earth. I often believed I was being watched, which is why I often took to shaking off my fears. I started strutting in the cold air. I started making rooster tracks in the damp clay. I started hemming and hawing. I started crowing. How I didn’t wake anyone I will never know because no one would later claim witness to what happened next—I was the only one, you see, with a subscription to the future.

A shadow like a swift crow descended—its cloak hanging like batwings around its pantherous body. I stood perplexed, studying the figure’s shape. Then, he turned his back on me, as if daring me to strike him. But I didn’t dare strike him. Instead, I remained loyal, or at least conscious of the fact that this was no ordinary turn.

The figure turned back to face me, and I studied the figure’s black and white face paint and mistook him for a clown. I say mistook because next thing I know he’s swinging a baseball bat into my hip. I fell to one knee. He started to walk away, but I grabbed at his trench coat. This move took him by surprise—he slipped in my tracks. Somehow, I got him in a hold, and I did not let go.

Then, a hand tapped my shoulder.

I turned my head, not knowing what to expect.

Low and behold, another shadow, identical to the first figure except that his face was painted red and black, had descended from the treetops as well, and this figure struck me on my other hip. I winced in pain. I called out for Debra, but Debra had not been invited to this Biblical sleepover. I was in the woods alone with two vigilantes and, having been blindsided, I could not stand.

Having lost my hold on the first shadow, I lay on my back not knowing what to do.

I closed my eyes.

When I opened them again, a third figure stood above me. I was staring upward at his neon crotch hugged by tight spandex. The two figures who looked like sinister mimes in the moonlight each swung a bat at the newcomer’s hips. He collapsed. I grabbed his luminescent spandex and did not let go. His hair was bleach blond. He looked like a surfer and so I curled round him like a wave, and in this cocoon, I noticed his face was painted like a butterfly’s wing. The other two men walked—as if jilted—into the crowd of trees and did not return.

“Please tell me your name,” I said.

And the remaining figure told me, and I said, “No, please tell me your real name.”

I crowed and crowed and crowed until the babyfaced sun rose up over the house and melted the night all across the backyard. I told the others this same story, and all they could find was a bandaged baseball bat and a broken tree branch—and by some miracle I could still walk, which was good, because no one was willing to give me a ride after that—and home was a long way from there—like something from a poem or cable television.

I made my way over many miles, and at the house, my father asked what wonderful things I had seen. I told him of my dreams, and he presented me with a robe sparkling in all the colors of a golden dawn.

Then—when he hit me—I convinced myself love is not always gentle.

The story ends in both these moments: the one where I sit in dusky silence and the other where I bask in the blond mane of the morning forever and ever. In each, the other is always present, and I try to remember that as I hold onto the limelight.

Bryan Harvey grew up in college towns from Kentucky to Georgia to Virginia. His writing has appeared in Hobart Pulp, Rejection Lit., Former Cactus, The Florida Review's Aquifer, The Cold Mountain Review, Bluestem Magazine, and elsewhere. He blogs about basketball for Fansided's The Step Back. He lives and teaches in Virginia.

Photo, "Campfire," by rebelpilot on Flickr. No changes made to photo.