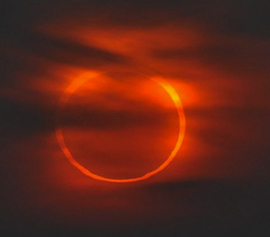 My wife was leaving me with her brother, who had just left his wife, so she could camp out with her wilderness skills club in order to view a total lunar eclipse.  “It’s a tradition,” Carrie said when I asked why I couldn’t come with her, why I had to stay with Morgan, her drunk, dickhead of a brother who was sixteen years older than her and therefore more like an uncle.  A drunk, dickhead of an uncle.

“We’ve been getting together since high school for each total lunar eclipse,” she said, wearing a knit cap that had been stitched with the word Lunartic.  “We haven’t had one in almost three years.”  She talked about things like tradition and catching up with old friends but I understood that the real reason was that she was going to sleep with some outdoorsy type who had complicated knots displayed on the walls of his study, that she had been sleeping with this guy since high school, and I was not to deprive her of this.

Morgan, her brother, sat on the couch sipping rum and coke through a straw and asked what was so special about a lunar eclipse.

“Nothing,” my wife said, “but a total lunar eclipse is very special.”

She told him the story that I had heard dozens of times, how Columbus—his crew having robbed and murdered some of the welcoming natives—saved his own life by using an astronomical almanac to correctly predict a total eclipse of the moon, inflamed with wrath, in order to scare the chief.  “Shee-it,” Morgan said, making a wanking motion with his hand, “I wouldn’t have fallen for that science bullshit.  I would have killed Columbus with my bare hands and then my tribe would have thought I was some kind of heap big badass.”

“Then his crew would have shot you right in the ass with their rifles,” I said.

“Not so fast, Poindexter,” he replied.  “I’d turn sideways, cut their target in half.  They wouldn’t hit jack shit with those popguns.”

I asked Morgan if he knew any of the people in my wife’s club.

“Does Carrie want to fuck any of them?” I asked.

He shrugged his shoulders.  “Could be,” he said.  “She likes mountain men.”

That night, drunk on bourbon and Sun Drop, Morgan took out a very mini-Casio keyboard, almost the size of a credit card, and turned on the rhumba beat.  He began to play “Unchained Melody”, slurring the words, “to the open arms of the sea,” so that it sounded like “tootie hope and harms odyssey.”

I watched the World Submission Fighting Finals on ESPN, two Brazilians wrapping themselves around and around each other, trying very hard, I thought, not to accidentally fuck.

“Jimmy’s fat,” Morgan then sang, punching the keys of the Casio with great emphasis.  “He’s got two cheeseburgers and a super-sized Coke…Jimmy’s fat.”  This was to the tune of Beck’s “Where It’s At”.  I turned off the grappling in mid-heel-hook and faced my brother-in-law, his mouth turned into a cartoon-styled frown.

“What are you doing?” I asked.

“I just wrote this,” he said, still playing, the Casio set to Funk.  “You know Jimmy Patrick?” he asked.  Jimmy Patrick had been a classmate of Morgan’s and had killed himself a few months ago.

“He was a fat motherfucker,” Morgan said.  “I hated him so much.”

“I thought you were friends,” I said.

“We were kind of friends,” Morgan said, sounding the same note over and over, staring off into space.

“He killed himself,” I said.

“Well, I didn’t really know him,” I said, and turned the TV back on to the next match, some fat-ass Russian and another arm-breaker from Brazil.

“Fifth grade,” Morgan said, “Jimmy stood up to do a problem at the blackboard and when he sat back down, I set up a pencil under him and it went straight up his rectum.”

“I sent a pencil up his butt,” Morgan said, about to cry.

“Jimmy squeaked and the teacher asked what was the matter, but he wouldn’t say.  He just looked down at his desk and wouldn’t move.”

“You say you put a pencil up Jimmy Patrick’s butt?” I said, and Morgan nodded.

“I’m having a hard time believing that, Morgan,” I said.

“Right up his butt,” Morgan said.

On the TV, the Russian was putting some kind of anaconda choke on the Brazilian, who kept rolling over, which only cinched the choke tighter.  I was positive—as positive as I was that my wife was fucking some guy under the shadow of a blood-red moon—that Morgan and Jimmy had engaged in some weird sex stuff when they were teenagers and it had probably led to Jimmy killing himself and Morgan subsequently leaving his wife.  Morgan played the opening part of “Lean on Me” and then gently set the keyboard on the table.  Ten minutes later, he was dead asleep.

I went outside and stared up at the moon, angry and rusted, ruined.  I wished I lived in a time when I could point to the sky, at the oddness occurring for only a brief time, and wield some kind of power over those who had no idea how the world worked.

Kevin Wilson is the author of a story collection, Tunneling to the Center of the Earth (Harper Perennial, 2009), and a novel, The Family Fang (Ecco, 2011). His short stories have appeared in Ploughshares, Tin House, One Story, DIAGRAM, and The Collagist. He lives in Sewanee, TN, and teaches fiction at The University of the South.