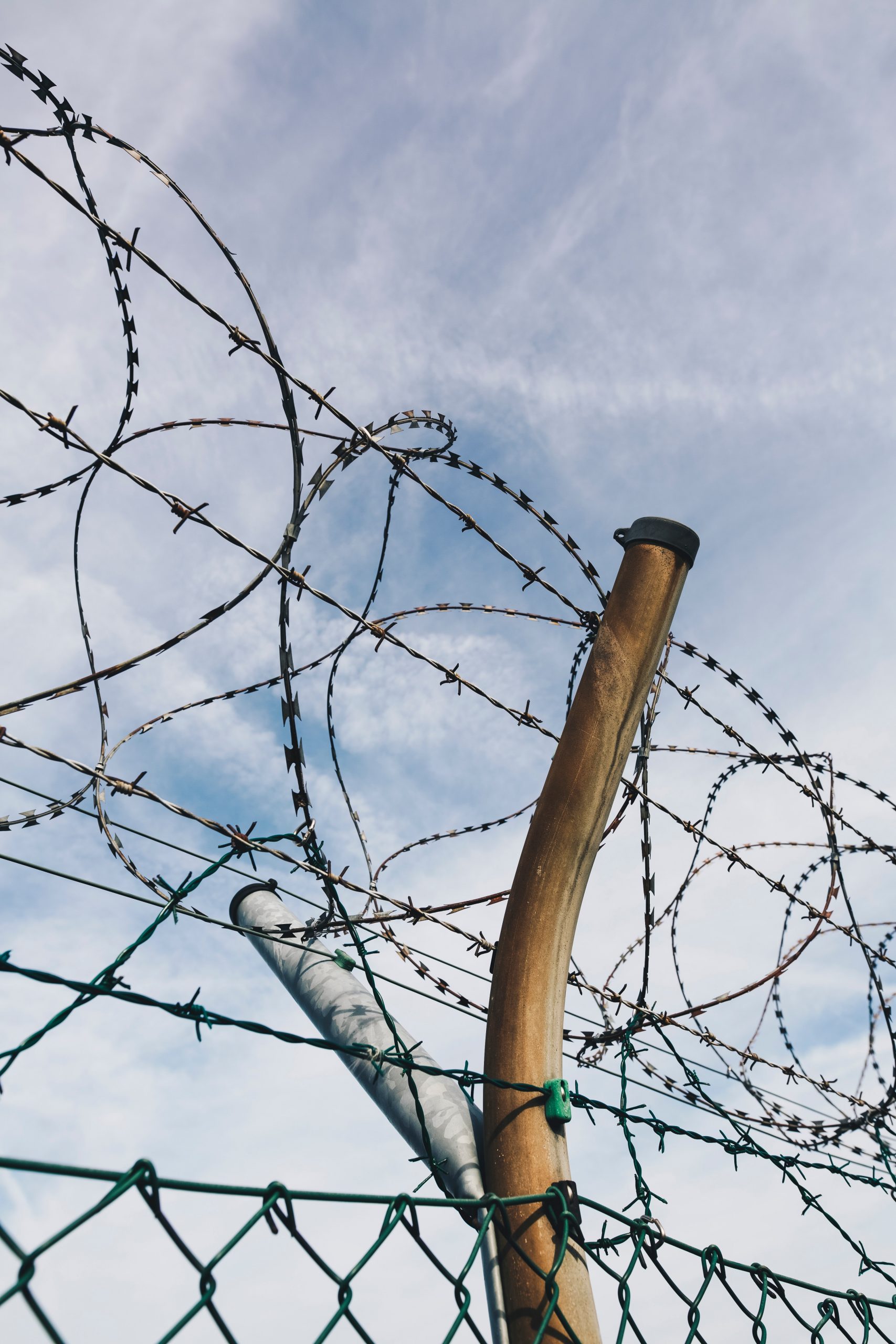 The warden stood at the barbed guardrails of the south tower, looked upon the yard, and removed his cap. The December air chilled his nose, pinched his cheeks, and iced along his thinning scalp. And yet even as he shivered, he knew it was insufficient: this cold was not enough to make the prisoners wear the hats.

The breath of the prisoners pooled above them, wended and faded like sputtering weak campfires. Gloveless as well as hatless, the men rubbed their hands together or sought with fingertips the warmth available in the purposefully small pockets of their pants.

The warden had been clear in his announcement: no gloves would be distributed until the men put on the hats.

Men clumped together then broke apart into pairs and singles; the cold encompassing all of them affected each irregularly. Some drifted sleepily; others jogged with purpose; some sustained a light, meditative hop.

They moved in a circle, or some it seemed from the warden’s vantage: a coherent swirl of men revolved around the cardboard box that sat like the spindle of a turntable in the blacktop. Even the movements of shiftless loners got caught up this cycle. They avoided the hat box almost prayerfully, and in doing so they centered it. They moved as if all that mattered was to keep the box’s humiliating contents from spilling into their lives. The games of the warden were purposeless and cruel, but the prisoners were resolved to win them anyway.

The box had been there months now, desiccating away. Rain and the elements had warped the cardboard walls. The surface of the box was rotted-out gray-brown, squalor’s color, like the paper of a lunch sack in which the food had spoiled; and yet, inchambered within this mottled carton, was a waterproof sack perfectly intact, full of donated caps, hats, and beanies. They had no excuses but pride to turn their ears red and worsen their head colds.

Six Octobers in a row, the warden had been setting out the box after the first freeze. He had chosen the hats himself and administered their modifications. There were faux bearskins in the style of palace guards; Rastafarian hats with fake dreads noodling out of them a Grinch-themed beanie with bells and poofs (if a theme presided among the hats, it was bells and poofs). One hat was a cross stitched penis, another a “Number One” foam fan finger with a beanie stapled into the inner lining. Dozens of bonnets, rumpled antiques evocative of covered wagons, awaited a loving face.

This year’s box contained a more ridiculous curation of headwear than the one they’d opened three years before, the year they broke. On that morning, the oldest prisoner in the yard fell over shivering and chattering, and the leader of the Dead Brotherhood ripped open the bag and put a hat on him, and the leader of the Red Song began padding the man in a blanket of beanies. Then the leader of Northtown Hell Wolves put a foam-boot hat on his own head, and then and helped the old man to his feet, and the men gathered forward, and had their Spartacus moment where they all put on his hats. They squinted through the itch, grimaced at the fit, stared ragefully at the tower. The Warden kept one print of this picture of this on his work desk and another in his home bathroom, hung at eyeline with where he sat when using the toilet.

Remembering these better times, the warden took up his intercom and harangued the resistors of his charity. The bare hands of the men covered their raw, pained ears against the plangent crackle. He heard their cries and threats and talked through them, like a comedian enjoying the experience of bombing onstage. He told them the lie about the hundred-dollar bills hidden in a beanie brim, rumors of early release.

His speeches never persuaded the prisoners, but all parties knew persuasion wasn’t the goal.

Soon the tossed pebbles began skipping against the wall behind him. A stone stung against his cheek; a shard of blacktop spanked his chin.

A third, larger rock knocked his other cheek, and when the cold air hit the site of the wound, a kissy eruption of nerve endings made the warden smile. It mattered to get this: the passion, the attention, upbraiding, the eyes that saw him well.

Keen eyes among the crowd saw the jailer’s blood forming on cold skin: watched the drops form to make a victory, whether his or theirs, that would have to do for now, until the whistles called them back indoors again.

Short stories by Samuel J Adams appear in The Sun, Timber, DIAGRAM, Ruminate, and elsewhere. He works for an agricultural land trust and lives in northern California with his partner Jenny and their cat.

Photo by Markus Spiske on Unsplash

← In a Dream, I Kiss Pinocchio and Punch My Fist into the Wall
The Stuntman →