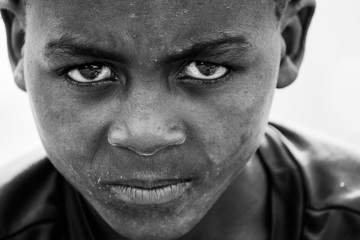 When grandmother passed away, father grew reticent. And I was okay with it, since he abandoned his routine of scolding me for lacking masculinity. Since he stopped tickling me and calling me girl-crazy if I laughed. Since he didn’t condemn every tear that fell from my face, spewing the same toxic rhetoric of how I needed to emotionally withdraw and appear similar to a parapet wrapped in black derma, to protect everyone around me, just like him. When I thought I would cry most, I felt nothing.

Weeks passed, and he still hadn’t spoken. He didn’t leave his bedroom unless to cook or work. His girlfriend advised me to console him, but I had no idea what that meant. “He needs someone to be there for him, a source of solace,” she stressed.

I reasoned, Shouldn’t that be you too? There’s no way he’s saddened. If anything, he’s angry, afraid of exacerbating the latter sentiment.

Regardless, I entered the room. The eye cascades were imminent, a lump in my throat burgeoning with every passing second. I saw grandmother harboring the space around him. With only her spectral eyes, she engaged in combat with the monstrosity inside me, the entity nurtured to siphon all liquids from my pores. Sweat. Tears. Blood. Nothing could escape without censure.

My body felt empty, but not like before. The internal entity existed out of fear, and when it vanished, I comfortably sat upright on the bed next to father. I had almost forgotten about crying until I beheld his glossy eyes. He sustained an image of an emotional bulwark for nearly a decade, only for it to crumble due to sorrow. Witnessing this was brutal. I had to turn away.

We held our gazes forward. All I remember was thinking, I’m not allowed to let you see me like this. Without looking, I placed my hand on his shoulder only to feel damp blotches on his shirt. Then I broke, both of us equally invested in our assured grief. Grandmother enfolding us in a space imbued with silence.

Delvon T. Mattingly, who also goes by D.T. Mattingly, is an emerging fiction writer and a PhD student in epidemiology at the University of Michigan. His fiction has appeared in Maudlin House, MoonPark Review, and elsewhere. He currently lives in Ann Arbor, Michigan with his two cats, Liam and Tsuki. Learn more about his work at http://delvonmattingly.com/. He tweets here: @Delvonmattingly