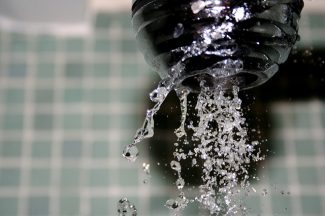 When I got home from work, Tania was lounging on the couch watching TV. She waved at me, her pale white arm like a swan’s neck, but she didn’t get up. When we’d first moved into our apartment, she used to greet me at the door each evening like we were in a black and white sitcom from the fifties. I’d call her June because that sounded like one of the moms from those shows and she’d call me Ward even though I thought it sounded like a guy with erectile dysfunction.

But the thing is, we shut down the fifties charade pretty fast when we learned that my sperm were meaningless and that we were never going to have kids. Tania had made a valiant attempt to continue meeting me at the door, but then I stopped calling her June, and that’s when she began waving.

“Do you have to be super old to get sciatica?” I asked as I put my bag on the kitchen table.

She didn’t turn from the TV. “You getting a new car?”

“Fuck,” she said. Lately, she’d been dropping f-bombs like a fighter pilot in WWII. “You should get that looked at.”

“It would be nice if someone looked at me,” I said.

I slouched to the bedroom with the sound of sirens and gunfire erupting from the TV.

Tania telecommuted and her daily routine consisted of working on the couch and then relaxing on the couch, and I couldn’t figure out why I was the one with the pinched nerve. I pulled off my shirt and tie and dropped my pants on the floor of our bathroom and stepped directly into the shower. I turned on the faucet and let the cold water pummel my head and neck as I waited for the hot water to catch up.

The shower had these large blue tiles on the walls and over the years they had accumulated layers of soap scum and irregular fading patterns. I liked to stare at the tiles until I saw shapes there. Mostly they looked like faces, and I’d gotten to where if I tilted my head this way or that, I could find my favorites. The man with the bushy eyebrows and the beak of a crow was above the soap tray. There was the man with the enormous smile and thick whiskers who was glaring at the faucet. Just below the showerhead was a woman with large, almond-shaped eyes and an amused twist to her mouth.

That’s the one that talked.

“I can help you,” she said, and I nearly slipped onto the floor of the tub.

“Holy moly,” she continued. “I have no idea how you managed to stay up with your arms pinwheeling like that. And here I thought I was the magical one.”

“What are you?” I managed to stammer.

I grabbed the soap tray to hold myself steady. “And you live in my shower?”

“If I had any choice, you think I’d pick a place riddled with black mold?”

“We have black mold?”

“I’m like a Catholic priest. I’m sent where I’m needed.”

Watching the wall of my shower gain the ability to talk was disconcerting. I tapped my forehead a few times with my right hand as if to nudge myself back toward sanity.

“But since I’m stuck here, I might as well help with your problem,” she said.

“Are you kidding me?” Her almond-shaped eyes tilted down to my little dude hanging between my legs. With all the insanity, I hadn’t once thought about covering myself. “I’m talking about your broken sperm.”

Now I covered myself. “How?” I whispered.

“Come on. Do you actually want to know? Are you planning to begin a new career as a water sprite? This is a one-time offer. There are a lot of other showers in this building.”

I thought of Tania on the couch. Then I pictured her with a taut pregnant belly, hugging me as I came in from work. That delighted smile she used to give me, as if I could change our black and white world to color.

“I’m sorry, there are rules to being a water sprite. I need you to spell it out exactly.”

I opened my mouth and then closed it.

“Repeat after me,” she said. “I want you to help me with my wee willy winkie.”

“Like I said. One-time offer, man. Sometimes you have to swallow your pride to get what you want.”

The image of a pregnant Tania returned. Maybe it wasn’t too late to have our sitcom. We might even have three sons.

I straightened my back and felt the water getting colder. “I want you to help with my wee willy winkie,” I said.

She laughed and it sounded like the trilling of a flute. “Nailed it.” Then she sprang from the wall, a body forming beneath her small head. Rounded shoulders. Bare breasts. Two pale thin arms. She glowed slightly in the shower in front of me, no bigger than the size of my hand.

“You ready for this?” she said, her almond-shaped eyes fixed on me.

I nodded, and she leapt inside my abdomen.

I tensed my entire body, waiting for some kind of pain. It stood to reason that if the water sprite was going to rewire my insides, it would hurt like hell.

“I am?” Because what I felt was naked and vulnerable.

“Has sarcasm been outlawed here or something? This transaction is literally painless and you’re squeezing your eyes shut so tightly they might never open again.”

I gritted my teeth. This water sprite was really starting to bug me. “How was I supposed to know what to expect?”

“I hate to state the obvious, but I’m done.”

I opened my eyes and saw the water sprite hovering in front of me, shaking her head and rolling her eyes.

“I don’t feel any different,” I said.

The water sprite sighed. “Just go to her,” she said as she flew back into the shower wall. “But don’t nibble her ear. She hates that.”

“Wait!” I said but she’d become another pattern on the tiles. Even though I still had dozens of questions, it was a relief to be free of her.

I shut off the water and a pain shot through my leg as I stepped from the tub. I wrapped myself in a towel and padded into the front room where Tania was waiting.

Her repose on the couch was suddenly extremely sensual, her limbs luxurious in the pulsing light of the TV. I tried to hide my pronounced erection before she looked up.

“Do you have a raging boner?”

“Yes,” I said and felt my face flush.

I was immediately hurt and ashamed, but then I realized she was talking about the way someone had been killed in the TV show.

I sat next to her and thought about how to initiate the next steps. It surely involved rubbing her hair and gently kissing her shoulders, which I was sure she liked, and then tilting her backwards onto the couch.

But she must have sensed my thoughts. “This show is almost over.”

After a lot of gunfire and explosions and a few one-liners that elicited quiet guffaws from Tania, the show ended. She snapped off the TV and we were bathed in silence. The light from the hallway backlit her in such a way that I couldn’t discern her features. It was hard to know what she wanted. I reached for her knee.

“I think I’ll take a shower and call it a night,” she said.

“Sounds good,” I said. As it turned out, my erection had abandoned me too.

She got up and disappeared into our bedroom. I thought about how I used to watch her ass whenever she walked away, and also how when she would walk toward me, I’d want to pounce. I wondered when that had gone away.

Maybe I’d made a mistake; I should have asked the water sprite to fix my sciatica.

I tightened the towel around my waist and decided to go to bed too. When I entered the room, I could feel something different in the air. Something electrically charged. An energy that had been lacking in our apartment for months.

“Shhhhhh,” I heard her say.

I ran to the bathroom and whipped open the shower curtain. Tania stood before me, naked and magnificent, attempting to hide a smile. I looked at the wall under the showerhead and didn’t see the almond-eyed face.

We stood that way for a full thirty seconds, the water cascading over her.

Then the water sprite flew out of Tania’s belly. “Surprise!” she yelled. “Sorry, I couldn’t hold it in anymore. I was dying with laughter in there.”

“Do you two know each other?” I said. I thought about how the water sprite had told me not to nibble Tania’s ear which, until tonight, I had always considered my top move. Had Tania been complaining about me to the bathroom wall?

“We’ve been chatting the last few days,” the water sprite said. “But nothing serious.”

“I thought we were getting close,” Tania said to her. Her brows lowered and she dipped her chin toward her left shoulder. It was her disappointed look, the one I thought she’d created just for me, and I wanted to take her in my arms and shield her from the hurtful little sprite.

In response, the water sprite fluttered her translucent wings. “I asked you a couple of times to put some bleach in this shower. But I guess you didn’t hear anything I had to say.”

“She fixed me,” I said to Tania, trying to change the subject. “I wanted to tell you earlier.”

The water sprite laughed again. “And from what Tania told me, you couldn’t even seal the deal. But don’t worry. The deed is done.”

“What’s done?” both Tania and I said at the same time.

“I grabbed a fertile seed from you earlier and I inserted it into an egg while I was hiding from you. Good news! You will have your child.”

“Is this another joke?” Tania said.

“A joke? You know me better than that. I don’t tell jokes.” And then the water sprite was gone.

Tania and I were left standing there, the water still running down her shoulders and pooling at her feet. We stared at each other for a very long time, and with one perfectly chosen word, she communicated more to me than she had in months.

I closed the curtain and left her in the shower with her thoughts. I slowly put on the same clothes from earlier and kneaded the same nerve on my leg and then went out into the same world that was unaware I had been changed.

I needed a bottle of bleach.

Josh Denslow’s debut collection NOT EVERYONE IS SPECIAL will be published in 2019 by 7.13 Books. Find out more at joshdenslow.com or on Twitter @joshdenslow.