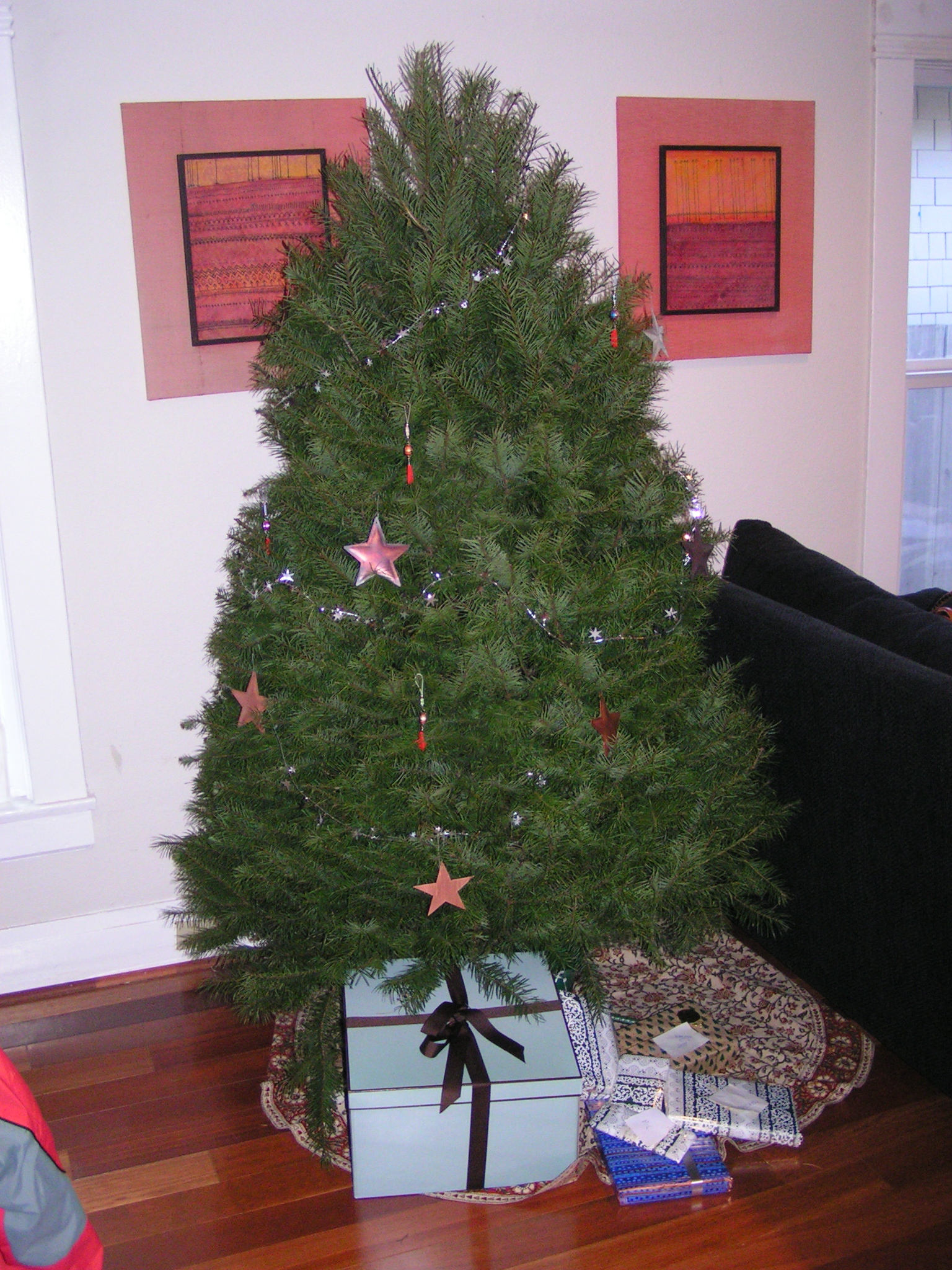 When Marc Chapman went in to work on Monday, all the boys in the shop were calling him Killer on account of the shiner he’d picked up at the game over the weekend. Chappy shrugged it off.

“Should see the other guy,” he lied.

As the weekend’s hangover subsided, a deeper hurt set in. Terri’d dumped him, and Shan was gonna shit a brick when he failed to deliver on Christmas. He’d only glanced at the list of gifts she’d written up for him to get their daughter, Alexia, before he’d lost it. He knew she needed a new snowsuit. Beyond that, he was fucked.

After work, he cruised over to the K-Mart out by the highway. He bought the pink snowsuit, ball parking on the size and hoping it would last Alexia through to next winter, too. He bought a pink plastic flying saucer, telling himself he’d take her to the toboggan run in the park anytime she asked. It’d be fun. Sure it would.

Shopping done, he got back in the truck and drove out the Spirit River Highway. Just over the Alberta line, he turned up a gravel road, drove a couple miles and parked half in the ditch. Chappy walked deep into the snow of the bush. It was dark, the pure dark of a cloudy, moonless northern December night. Chappy had a little pocket lamp, which he held it in his teeth as he sawed down a small spruce tree. Then he hauled it, huffing, sweating, puffing, out the way he came and tossed it into the box. Back home, he fashioned a stand from some scrap pieces of 2×4 to hold the scruffy tree up, though it canted noticeably to the right.

“She’ll do,” he grunted, satisfied with his middling handy work.

Then he waded through the snow to the sun-bleached tin shed in back of his trailer. He dug through mountains of empties, past summer tires and over the broken lawn mower to a stack of junk in the far back. There, he found the old Gordon’s Gin box that held what was left of the Chapman family Christmas ornaments, which he’d salvaged from his father’s house when the old man had died five winters back.

Sorting out what passed for the old drunk’s estate, Chappy’d been surprised to find the ornaments intact from those few early, happy family Christmases: old glass baubles, the hand-painted wooden elves, the taxidermy bird that rested on the uppermost bough. Sure, it was all dusty and a little worse for wear than he remembered. But it was all there. It had always been tradition to decorate the tree together, as a family. As far as Chappy recalled, it had always been a great time. Maybe their best, even. But that year after his mom died, he’d had to force his father to get a tree at all.

With a heavy sigh, his father had rolled off the couch where he spent most the time he wasn’t working, and they’d loaded into his old Chevy. They drove out the Spirit River Road into Alberta. The old man stopped where he always stopped, stomped into the bushes with a rusty saw in one hand and came back out with a tree. He set the tree up in the living room at home, but it wasn’t until Christmas Eve that Chappy could convince his father it was time to pull out the decorations.

Chappy’d run to the closet, dragged out the box. In a haze of rum, painkillers, and cigarette smoke, the old man shuffled around, wrapping the tree in lights and garland. When it came time to place the final piece, the little bird on the top, his father stumbled, nearly knocking the tree over before he caught himself.

The next year, they bought a tree from the parking lot of the Co-op. Chappy did all the decorating himself. After that, they never bothered. It wasn’t until Alexia was born that Chappy ever got a tree again. It had been Shannon, that first year, who’d done the decorating. Chappy watched, bouncing the baby girl on his knee, rye and coke in hand.

The following year, Shannon and Chappy had shared a couple laughs as the young girl toddled about, trying to help with the decorating herself. So cute, they’d said. Just adorable.

Since the split, the whole Christmas thing went down at Shannon’s parents’ place. Chappy hadn’t been invited. This year Chappy resolved to show his daughter what a real Chapman Christmas was all about. They’d decorate the tree, together. They’d drink hot chocolate, eat candy canes and popcorn and whatever else the girl wanted. They’d open their stocking and presents and go fuckin tobogganing and everything. Like a real goddamn family.

Come Friday afternoon, Chappy’s shiner had begun to subside. He still looked and felt like hell, though. Snow was falling thick and heavy on the road up to Fort St John. The drive up the highway was slow, slippery, and lousy with other motorists.

“Hi there, princess,” Chappy said when he got to Shannon’s door, squatting down to her level. His knees were sore and he felt a pinch in his hip from the drive. “You ready for Christmas with Daddy?”

“It’ll be OK, sweetie,” Chappy said, to reassure himself as much as the girl. “We’re gonna have lots of fun. I promise.”

Next morning, Chappy made breakfast. He cleared the driveway while the girl, pushing a cracked plastic shovel, “helped.” After lunch, he made hot chocolate and loaded up with marshmallows. They opened up the Gordon’s Gin box while Miracle on 34th Street playing on the TV. Chappy did his level best to field the girl’s endless stream of questions, comments, concerns.

“Because it’s a real tree. Real trees have sap, like blood. Or boogers.”

“Doesn’t sound real to me.”

“Whatever you say, sweetie. Here, take this candy cane. Put it over there.”

The girl grew bored of decorating the tree before long, so they called it quits. Chappy made popcorn and another round of hot cocoa, substituting spiced rum for marshmallows in his. When the credits rolled on the TV movie, Chappy put in the VHS he’d rented and ordered pizza. They watched the Muppet gang caper through the holidays in the glow of the old Christmas lights. Chappy, dozing, felt like things were finally looking up.

Both father and daughter fell asleep before the film was over or the pizza gone. Chappy woke an hour or so later, groggy and needing to piss something fierce. He shut off the TV, unplugged the tree and crept to the bathroom. Deed done, Chappy fumbled back through the dark on tiptoe, until his right foot caught something on the floor.

With a crash, the half-decorated Christmas tree came tumbling down, filling the dark living room with the jingle jangle of smashing ornaments and popping light bulbs.

“Motherfuck,” Chappy cursed as the branches scratched up his arms, stomach, his still bruised face like so many Western Canadian Lotto tickets on Christmas morning.

“Daddy, daddy,” she cried at the height of her four year old register. Her shrieking split his skull as he struggled to free himself from the fallen tree. “Daddy?”

“Goddamnit,” Chappy cursed, elbow pulsing as he clawed his way up through remains of the table and their greasy pizza dinner.

Wincing, he pushed himself up painfully to his knees. He wrapped his arms around his terrified daughter. She howled, jumped back.

Night passed. Chappy cleaned up the mess quietly. He stood the tree back up, canting much further to the right than it had before, broken and bent branches dangling. He restrung the lights, swapping out the broken bulbs for new ones, and replaced all those decorations that had survived the fall to the floor. He swept up the debris from the carpet, Dustbusting the finer, sharper grains and tossed it all outside in a heap.

In the early morning gloom, Chappy dug his stash of presents out from the hall closet. As he set them down where the table had once stood, Chappy realized he’d forgotten an important piece of the Christmas puzzle.

With a heavy sigh, Chappy gathered a stack of old Hockey News magazines from the can and started ripping out the most colourful pages one by one.

When Alexia woke hours later, all her presents lay beneath the ragged tree, wrapped in glossy pictures of Gretzky, Gilmour, Lemieux, and the others stars of the big show. The lights of the tree sparkled off the unbroken ornaments, filling the trailer with a warm glow.

“Yay!” the girl squealed after rubbing her eyes awake, her face lighting up in a way Chappy hadn’t seen in some time. “Santa came! He really did!”

“Sure,” Chappy said over his fourth cup of instant coffee. “Sure he did, honey.”

The girl tore through each gift, the act of ripping the players apart as much a part of the thrill as any of the receiving. Chappy was glad she didn’t stop to question Santa’s choice of wrapping paper. In the end, the room looked an even bigger disaster than the night before, pieces of hockey heroes and plastic packaging strewn everywhere.

“Can we go toboggan?” Alexia jumped up and down with the plastic disc gripped tightly in her tiny fists. “Can we go now? Can we?”

“Sure thing,” Chappy laughed, forgetting his exhaustion for a moment.

Arm in arm, father and daughter marched out the door into the sunny, bluebird day, only to find that the temperature had plummeted overnight, mercury hovering down close to -30 and the wind howling. In his haste Friday evening, he’d forgotten to plug the block heater in. Now, try as he might, and try he did, Chappy could not get the damned engine to turn over.

“Nothing,” Chappy lied. “Looks like we’re gonna have to wait a little while before we go tobogganing, sweetie.”

“Why?” she asked, frowning deeply.

“The truck just needs a little time to warm up, that’s all.”

The girl did not take the news well.

When Shannon showed up, the girl was still crying.

“You lost the list, didn’t you?” Shannon said when she saw the girl’s Christmas loot piled up on the flying saucer by the door.

Chappy made to deny it, but it was no use. Instead, he just shrugged, defeated.

“Merry Christmas, sweetie,” Chappy told his daughter, wiping the tears from her cheeks as he pulled her close to him so that she wouldn’t see the tears pooling in his brown eyes. “We’ll go tobogganing next time. Be good for mommy, OK?”

“I love you too,” she sniffled, wrapping her tiny arms tight around his unshaven throat. “Merry Christmas, OK?”

Sheldon Birnie is a writer living in Winnipeg, Manitoba, Canada. His writing has appeared or is forthcoming in Rejection Letters, X-R-A-Y Literary Magazine, Cowboy Jamboree, Exoplanet, among others. He can be found lurking online @badguybirnie.

Photo, "We got a christmas tree," by rabble on Flickr.