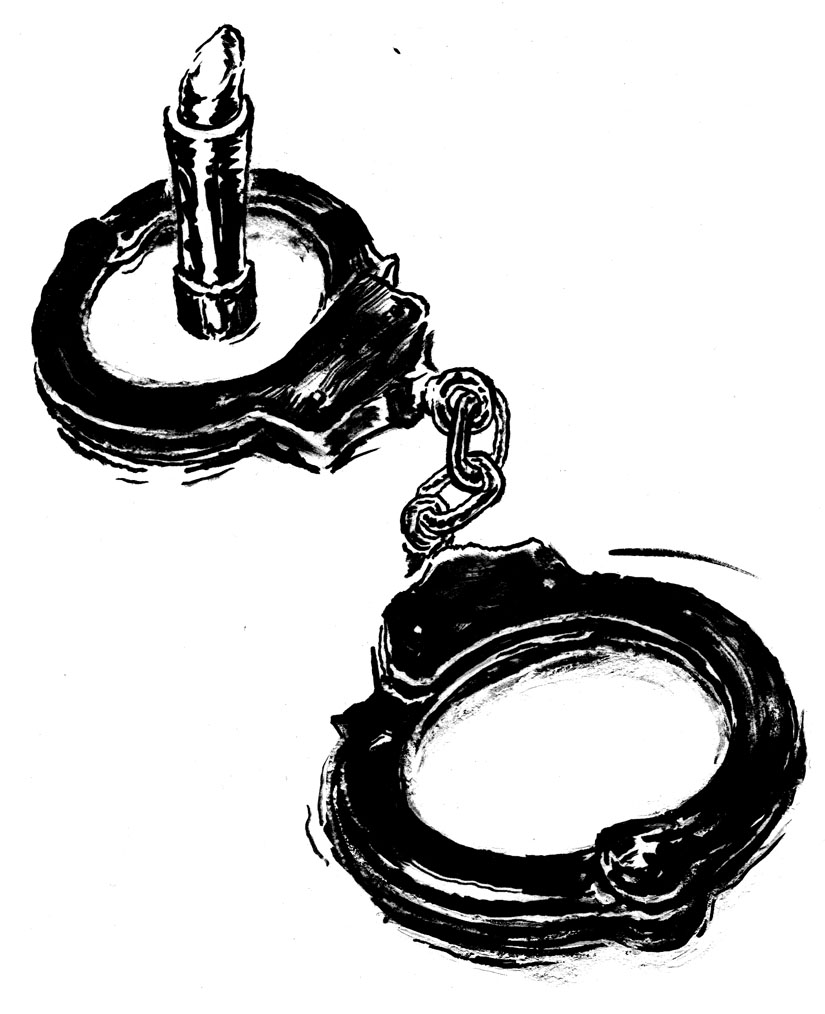 Annie and I were walking along the beach and we saw the body. At first we thought it was someone lying on the sand, sleeping. We weren’t sure if it was a man or woman. This person had long stringy blond hair and wore baggy jeans. It looked like this person was wearing thick red lipstick. We changed our path to walk around the person. Annie said, Something isn’t right. She said, Hank, something is wrong.
The person was a man, and the man had lipstick smeared on his lips and make-up caked on his cheeks and forehead, like someone had tried to paint him up as a clown. His hands were handcuffed behind his back and his eyes stared upwards. He was not blinking. He was not moving.
Is he dead? Annie said.
I let go of her hand and stepped toward the man, my feet sinking into the sand.
Annie said, Don’t go near him!
I just need to look, I said.
Please don’t, she said.
I had to have a closer look. Flies swarmed around the body. The guy was not breathing. He appeared dead but I had never seen a dead body.
Annie grabbed my hand and pulled me back. She said, Let’s get out of here.
I think he’s dead.
It’s none of our business, she said.
What should we do?
We should get away from here, she said.
We need to tell someone, I said.
Why?
The police, I said, we should call the police.
Why? Someone else will see the body. Why does it have to be us?
We have to, I said.
No one has to do anything, Hank.
Annie wanted to walk fast. She was pulling me with her.
We found a lifeguard on a three-wheel ATV. I told him about the body. Annie was not happy. The lifeguard acted like he didn’t believe us.
It was in the news the next day, on TV and in the papers: two unnamed teenagers find a dead body on the beach. No mention of the make-up, lipstick and handcuffs. The man, said the news, was unidentified, said the police. A detective came by my parents’ house asking a few questions. Annie was there in my room, we had been kissing and touching but she was distant. We were both still virgins. She was having nightmares about the dead body. The detective didn’t ask much, just what time did we find the body, did we notice anyone suspicious, did we touch the body.
I wish we never took that walk, Annie said.
Two days later, when we were alone, Annie and I lost our virginities to one another. She said it was time because she could die any day and she didn’t want to die not knowing what sex was all about. It was quick, sticky and smelly. Annie cried after. She said, What if I’m pregnant now?
She was not pregnant, not that time or many times after. But eventually she was, and we went to get an abortion at a feminist clinic that didn’t ask too many questions.
Annie cried for the loss. We’re murderers now, she said.
We were one month away from graduating high school.
She still had nightmares about the dead body. Annie said, His eyes—I always see his eyes, and the handcuffs and lipstick.
The body was identified. His name was Max Spiers, a resident of Colorado, many states away. He was a known associate of drug dealers. There were no leads in the case, no suspects.
What if those drug dealers come looking for us? Annie said.
Why would they? I said.
Because we found the body, she said.
We didn’t see anything, I said.
We saw enough.
We graduated and didn’t know what to do with ourselves. Annie considered nursing school because the government offered grants. My parents were not happy that I didn’t get a scholarship to a nice college. I didn’t try, that was the problem.
Annie wanted to go to church so we could be forgiven for our sins. We killed a baby, she said, and Jesus is not happy.
Jesus, I said…

Michael Hemmingson was a screenwriter, novelist, poet, playwright, literary critic, and guitarist who died on January 9, 2014 in Tijuana. He was 47 years old.