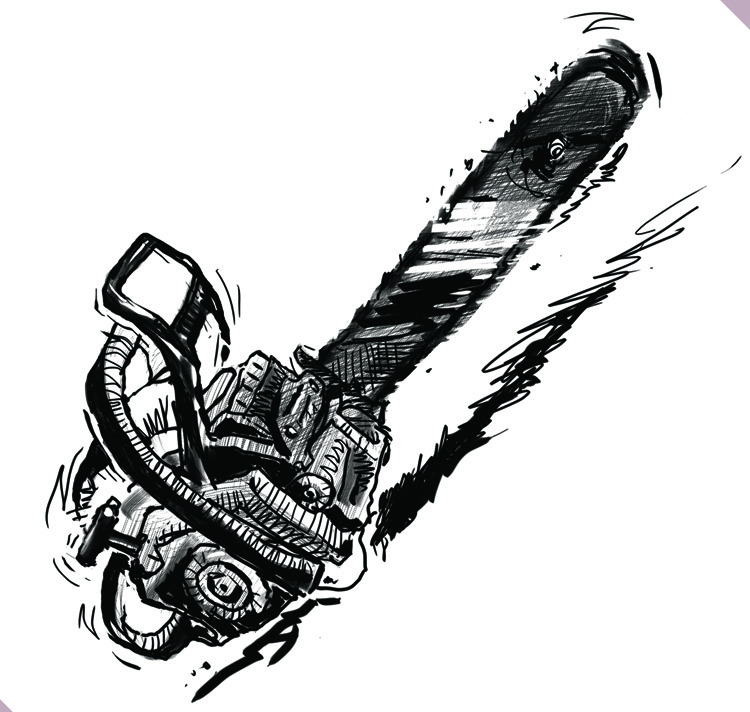 A good man,” said Suck. “Little gnarly maybe, but taken well before his time.” We suffered over him a while, then he told me how we could make it right.

The two of us spent nearly every night of that winter in his frigid garage, drinking through the aluminum Grain Belt beers, dulling and sharpening his wall full of tools, a fuzzy radio broadcast creeping about the place like the white of our breath. And in the spring when we finally raised him up, everything felt different—that’s how everyone explained it, anyway—softer somehow, and younger. Maybe it didn’t make up for what I’d done, but it was something.

The only motel in the two blocks of downtown Littlefork doubles as beauty salon, a fax center, “and a B&B if you want any breakfast,” says Norma, the maroon-permed old woman behind the counter when I check in. Her brows knit together behind huge bifocals as she studies my license. “Oaten Noblett? Why, you’re kin! You probably don’t remember, but I’m your granny Mack’s second cousin!”

I move to shake her hand but she grasps my forearm and pulls me in for a hug over the counter. “Awful sorry about your dad,” she says, patting my back. “Boy, with those deep-set eyes of yours… you look just like him.”

“You know, I met you when you were just a little fella. Now, where you been all these years?”

The drive was almost 2,000 miles from the desert, sidling across the Oklahoma and Texas panhandles, then rushing north up the endless Midwestern plains. Up on the northern edge of Minnesota’s Iron Range the trees became so dense they nearly blotted out the light. That’s when I knew I’d made it, that I’d finally returned to rainy river country in the north woods of Koochiching County.

My dad was a logger in the north woods. My grandpa, he too was a logger, lived right here in town before he was dragged to death by his horse. I never grew up here like I was supposed to, never rode any horses, never cut a log in my life. I drove here in a four-cylinder Hyundai.

Norma shows me to my room down the hall. The shower is no more than a trickle from the faucet, the bed a trundle twin that whines when I sink down into it. I pull the note out of my pocket, read it once more before shutting off the little table lamp.

He must have written it right there at the end…

Josh Amidon lives and works in the beautiful mountains of southwestern Montana. When he's not changing one of his baby's diapers, he's changing one of his other baby's diapers. This leaves little time for writing, but like that story with that one kid who leaves his home, returns, then receives lots of grilled meats and various parties thrown by all who had despised him during the time he was away, he's sworn he too will soon return. He's learned recently how hot dogs no longer agree with his digestive tract, so please: no hot dogs.