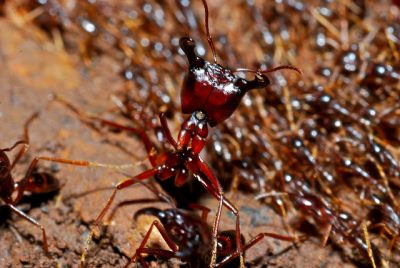 We were unkind to the ants. They weren’t usually to blame. Though on occasion one might crawl up a pant leg and compel a dance or lodge its mandibles into our flesh when we moved to crush them, these transgressions were excusable, merely sins of instinct, while our own base ambitions were wanton and without clear redemption.

They weren’t much to look at, the ants, and that’s perhaps what made sport easy. That fifth-grade summer, we honed our creativity through trial and error, a seemingly endless supply of six-legged offerings. We chased them with stones and matchsticks and our own eager fingers. We learned to lightly maim them to make collection easier. Over and over we forced them to wander through the desolate wilderness of a sandbox. We blew sandstorms and summoned tsunamis with a garden hose. We raised our palms aloft, and sand poured from the sky in biblical proportions. In the quiet aftermath we held our breath until the ants reemerged to our shame and delight, digging frantically through the grainy ruins of their world before scrambling in vain for cover.

For those who dared withstand these tribulations, we celebrated their resilience with further sacrifice, tossing them onto the spider’s lair where their shivering summoned the funnel weaver from its cone, and we would howl with glee when the spider pounced.

“Lord have mercy,” the deacon’s son Simon Keats was wont to say, and he would cross himself with one hand while his other plump fingers reached to knead more ants into submission. Simon was two years older and near the worst among us, savoring the finer points of a medieval ingenuity he spent many a Sunday perfecting. It was Simon who understood the viscosity of red Jolly Rancher spit that he used to mire his hapless victims. It was Simon who looked to the skies for inspiration. Under Simon’s tutelage, we learned how to harness the sun with a magnifying glass. He taught us to luxuriate in the zigzag pursuit of our quarry, to embrace that exquisite circle of sunshine that could crackle at any moment as it stalked and narrowed into incandescence, and the acrid fumes rose into the heavens above.

“That don’t smell right,” the acolyte Mikey Carlson said, his eyes still filled with silvery stars from the hunt’s glow.

“You get used to it,” Simon said. He breathed in deeply. “That’s so. Go on, give it another shot.” And Mikey Carlson did, as did all of us in our turn, our lips sealed tight with concentration. We set another offering in place, and then another, each ant shriveling more quickly than the one before as we eventually caught the hang of the perfect angle.

After a long afternoon in the wasteland, once the spider had its fill and the sun fell too low to provide sufficient warmth, Simon sculpted a mound of sand, sturdy and tall. He flattened the peak and wedged a pair of gray skipping stones atop it. Then Simon uncapped a can of no-drip spray paint usually reserved for model rockets and shook it vigorously to make the pea chatter. We watched solemnly, saying nothing, and Simon placed one of the last survivors on the slabs. Even though the perpetual motion of its limbs had long lost steam, we knew the will to beat the final rap remained intact for even this, the littlest of earthly things. An antenna twitched, sensed that the coast seemed clear, and the ant began to traverse down the slope. The motion caught Simon’s all-seeing eye, and he rattled the can with one last flourish before pressing the nozzle down. Clouds of gold hissed out.

“Nowhere to run, no place to hide!” Simon cried when the ant scrambled left and right while the gold rained down upon it. Simon was generous with his application, and soon even the mound was shimmering like Yukon dust. Sweet, burning fumes wafted through the air.

“Goodness, that’s pretty,” Simon said after he released the nozzle, and the world grew silent, all of us awaiting the bounties of his good work. The ant scurried off the mount in one last mad dash for salvation that was almost there. Then the quick dry kicked in, and its desperate strides grew less pronounced, slowed, then finally froze.

“Now you know,” Simon proclaimed. He lifted the ant with his fingertips and blew the last specks dry. And we saw that the ant was small. It was gold. Simon’s fat pinky was delicately extended.

“That don’t look right,” Mikey said, though he reached out his palm to receive it.

“It’s in the eye of the beholder,” Simon reminded Mikey. He placed the first ant into Mikey’s cupped palm and readied the slabs for an encore. “Go on,” Simon said to Mikey, passing the can to him. “Show us. Let’s see.”

Hun Ohm is a writer and intellectual property attorney. He lives in western Massachusetts. His fiction has appeared in JMWW, Necessary Fiction, The Citron Review, Literary Orphans and other publications.

← Cigarettes After Sexism: The Shy-Boy Misogyny of Indie
Higher Ground →