I Have Always Been Here Before 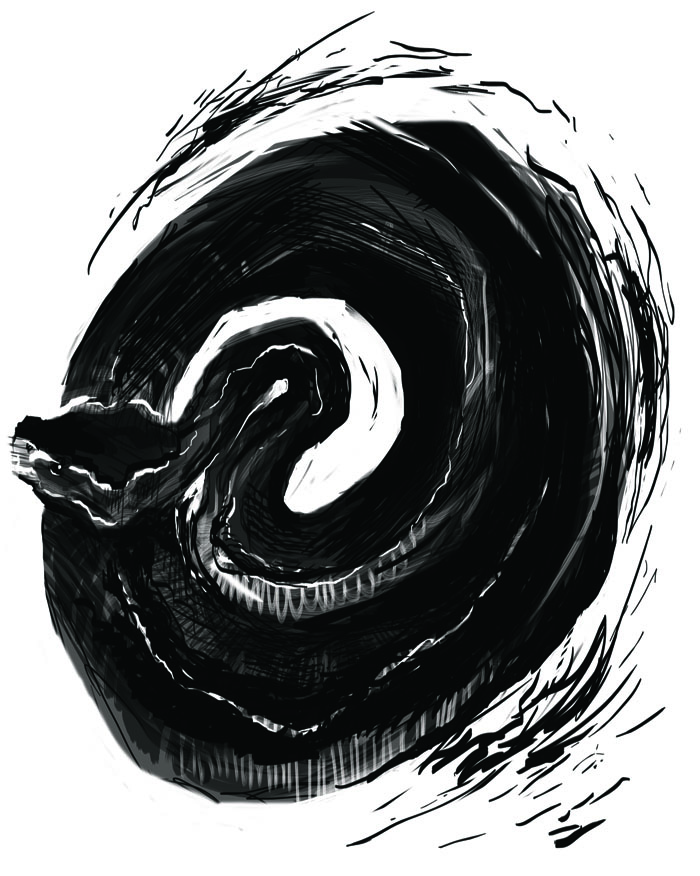 Bailey has been training for the contest every day for months. He comes home from his graveyard shifts at the tire plant and sits down at the breakfast table, in front of his wire cricket cage holding cockroaches, the big hissing ones he raises to feed his lizards. Bailey is nothing if not methodical, and the act is ritualistic, a kind of communion. He places them between his teeth, back end first, the head and front legs waggling out of his lips. The roach always struggles for a moment when he bites down, only to relax after the initial crunch as if resigned to being eaten. The slightest hint of a shudder passes Bailey’s face as he swallows, and I can see that though he tolerates the terrible writhing, the feel of a life ending between his teeth, the swallowing is still difficult. He’s on the verge of gagging every time.

We are not like most brothers. Neither of us could ever throw a baseball and Bailey was never interested in my video games, so there was no competitive fire between us, no sibling rivalry that would have followed us here into our twenties, and I do not know why I come into his room every night when he is away at work and hold one of his roaches in my fingers, trying to work up the nerve to gobble it down. I plan to do it differently, to just cram it in my mouth, crush it between my back molars and swallow, but I am never able to even bring the thing up to my lips without retching, no matter how much I steel myself.

Tonight I stand in front of the breeding tank with one of the smaller ones squirming idly—they are rather tame and trusting, like some sort of insect cattle—in my fingers. Bailey’s lizards, the brightly colored geckoes, the sketchy, cautious chameleons, and monitors thick as my leg, all watch me from behind the glass of their enclosures, the bigger ones flicking out their tongues to taste me in the air. Even the snakes, usually so stoic, seem to mock me as they sit coiled upon themselves. Suddenly the baby cries from his bassinet beside my bed in the other room, and I’m grateful to be let off the hook without having to admit failure. I put the roach back in its home and run off to find the hand sanitizer before I see about the baby.

There is nothing wrong with the baby except that he is awake and lonely. He lies awake, I think, worrying about the things newborns must worry about. Like when the next nipple is coming, whether the fingers that keep finding their way into his mouth might be part of his own body. “What you need to worry about is your anus,” I tell him, inspecting his diaper, proud that I have remembered to use the word anus, not to cuss in front of him. His latest poopy is like birdseed soaked in mustard and smells like rancid Fruity Pebbles, a sea change from the stringy pesto-colored tar he was producing last week. I congratulate him on such a healthy bowel movement, just like the ones the web sites describe as perfectly normal, and I explain once again the importance of controlling one’s own anus, our truest door to the outside world. “It really is the secret to life,” I say, and he responds by peeing in my face, his tiny red pecker bouncing joyfully with the effort.

When the diaper is done we sit at the computer, and he furrows his tiny brow as I read him the news. We’ve been following a story about a hostage situation in a Myrtle Beach divorce lawyer’s office, and it has ended peacefully, just as we’d hoped. I read him the good news and skip over bad, ignoring the fatal hit-and-run on HWY 17, the missing woman in Georgetown, the meltdown at a Japanese nuke plant. The baby is not in the mood for the news, but seems to look at me askance even though the websites say he will not be able to focus his eyes on faces for two more weeks. He screws his little face up in protest, gathering his breath to cry, before he lets it out. His crying is impressive in its bitterness, the pitch of its desperation. I have never witnessed a pain so pure as the pain he suffers from gas and loneliness, the two most real things any human being will ever face. When he gets like this, nothing will soothe him like music, so I take him back to my bedroom.

There is some awful hoarding gene embedded in the DNA that I share with Bailey, something that compels us to surround ourselves with the things we love, to pile them up on top of one another, always wanting more. The way Bailey is with his lizards and snakes, I am with records. The walls are lined with crates and crates of them—4,133 at last count—arranged alphabetically by artist, chronologically by LP, in groups according to genre, sub-genre, and relevance. The entire Krautrock and European psychedelic section has been dismantled to make way for the baby’s bassinet, tucked in between the New Wave of British Heavy Metal 1979-81 and Bop/Post-Bop. The uprooted LPs sit in small stacks on the other crates, homeless, out of order, and the disarray pains me.

The baby has simple tastes. He prefers country tunes from the seventies and eighties, the outlaw stuff and the countrypolitan crooners all the same. He finds Emmylou Harris especially soothing, so I drop the needle on her Luxury Liner album and two-step him around the room. The second song is “Pancho and Lefty,” and by the time it starts, he’s calmed down. He looks up at me from out of the bundle of his blanket with far-away eyes. “You remember this tune,” I tell him, reminding him we’d listened to Willie Nelson doing it just a few nights ago and we’d discussed how it was a song about betrayal and the way regret grinds everybody down in the end, even those few of us who manage to lead legendary lives. “That’s a lesson you need to learn early in this life,” I tell him. He crosses his eyes and I feel a vibration on my arm from his diaper. “But only after you master your own anus.”

I don’t even know the baby’s name, but I have decided that I am not going to give him back if his mother ever returns to claim him. When he finally falls asleep some time after sunup, I try again to contact her with the number she left me. Again the same man answers, rattling off something in what sounds like gangsta Spanish that I assume roughly translates to I don’t know who Casey is, so stop calling me asking for her, motherfucker! I stare at the number, wonder if perhaps what I’ve taken for a 1 is really a 7 and dial it that way. A robot voice calmly tells me that number has been disconnected.

I am scared that some government agency is going to come take the baby away from me. He is not, after all, mine. Except that he is mine, has been mine for two whole months, practically three-fourths of his whole life so far as I can tell, and that should count for something…

Joey R. Poole lives in Florence, South Carolina with his wife and son. His work has previously appeared in places like The Southeast Review, Adriondack Review, and Moon City. He recently finished his first novel and is looking for a publisher.

← The Pig’s America
How to Throw a Drunken Punch →