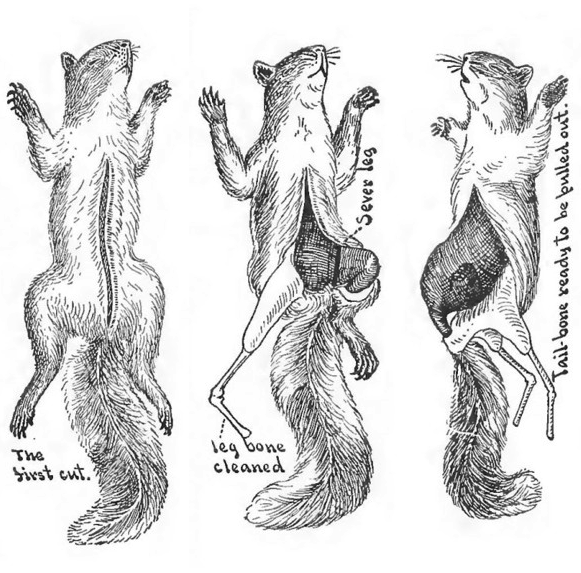 Here’s what I have to say:

There were tons of campus e-mails sent to us students about a guy mutilating animals around town.  He was to be avoided at all costs.  That was the gist of the e-mails: stay clear.

This went on most of January.  Winter hit hard enough without this guy chopping up wildlife.  Butchering bunnies. Schlacking small foxes.  The whole shebang.

The incidents occurred at night.  Most of the time, no one knew it happened until somebody found the parts the next morning.  Never the full body.  Only limbs.  Bones.  Leg meat.

Some kids put pictures of the bloody snow on Facebook.  Just red on white like a signature inside a blank card.  Thinking of you.

We were a college on the hunt.

I looked for him, though.  For those two or three weeks when all the students got the emergency alerts.  I especially eyeballed the homeless guys around the city.

I offered Homeless Gary a cigarette outside of the VP and checked his fingernails for giveaways. Up close his hands were rough pinecones.  His coat smelled like axle grease.

I’d meet people and ask myself, “Is this the kind of person that could do such a violent thing?”  I looked at my roommates, wondering, “Is he that angry?  Is he capable of that?”

These were the hard-hitting questions that affected the student body and faculty at that time.  Everyone wanted to know what kind of person…

In a dream I found him. We were surrounded by evergreens.  I sat down in front of him, watched him work.  He was slim and clean-shaven.  I expected a wildman.  Nope.  This guy was like anyone else.  Nothing crazy-looking about him.

Even dreaming, I felt greedy for hogging that moment.  He hacked a rabbit in half with a full-armed yank of a bow saw.  Nonchalant.  Business as usual.

It was pretty weird.

I woke up with the worst taste in my mouth.  Dirt and hairspray.

In real life, he upped the ante.  He put some dismembered animal bodies on doorsteps.  He picked the houses indiscriminately.  He didn’t ring the doorbell or knock.  He set the corpse on the porch and moved along.

The city was ready to riot.

He left the front steps on my street alone, but two houses down a block were hit.  It wasn’t pretty.  Some of these bodies were two weeks dead.  Their muscles were rotting black.  The cruelty crawled through the neighborhoods.

It smelled worse than old coffee milk sewage.  Even in my house, I could almost feel it on my tongue.  Flies covered every square inch.

A day after that, they got him.  Caught him in the act.  Put him on the ground at gun-point.  Took him away.

He was crazy.  No haircut ever.  Long-ass beard.  Filthy.  Covered in blood, and fur, and dried sewage.  He was homeless.  Just like they thought.

I looked at the front page of the Star Press.  A full spread picture.  A look on his face like, “I did what I had to do.”

I saw the guy from my dream.  I saw him peering into the camera.  I saw him treading water.  Nothing but his head above the surface.  Animal parts floating around him.  He was glowing.  The dream-man was clean cut and his eyes were bright green.  Like life.  Like being alive.  I saw that.

Yeah, I saw the psycho homeless guy.  But I couldn’t not picture the man from my dream.  The one like all of us.

I saw that guy, and I couldn’t tell if serenity was spitting him out or swallowing him whole.

Austin Hayden lives in a big house on the White River in Muncie, IN.  He's on the team over there at NOÖ Journal and runs 90's Meg Ryan.

← The Last Word: Decline of the Swan
BULLshot: Austin Hayden →