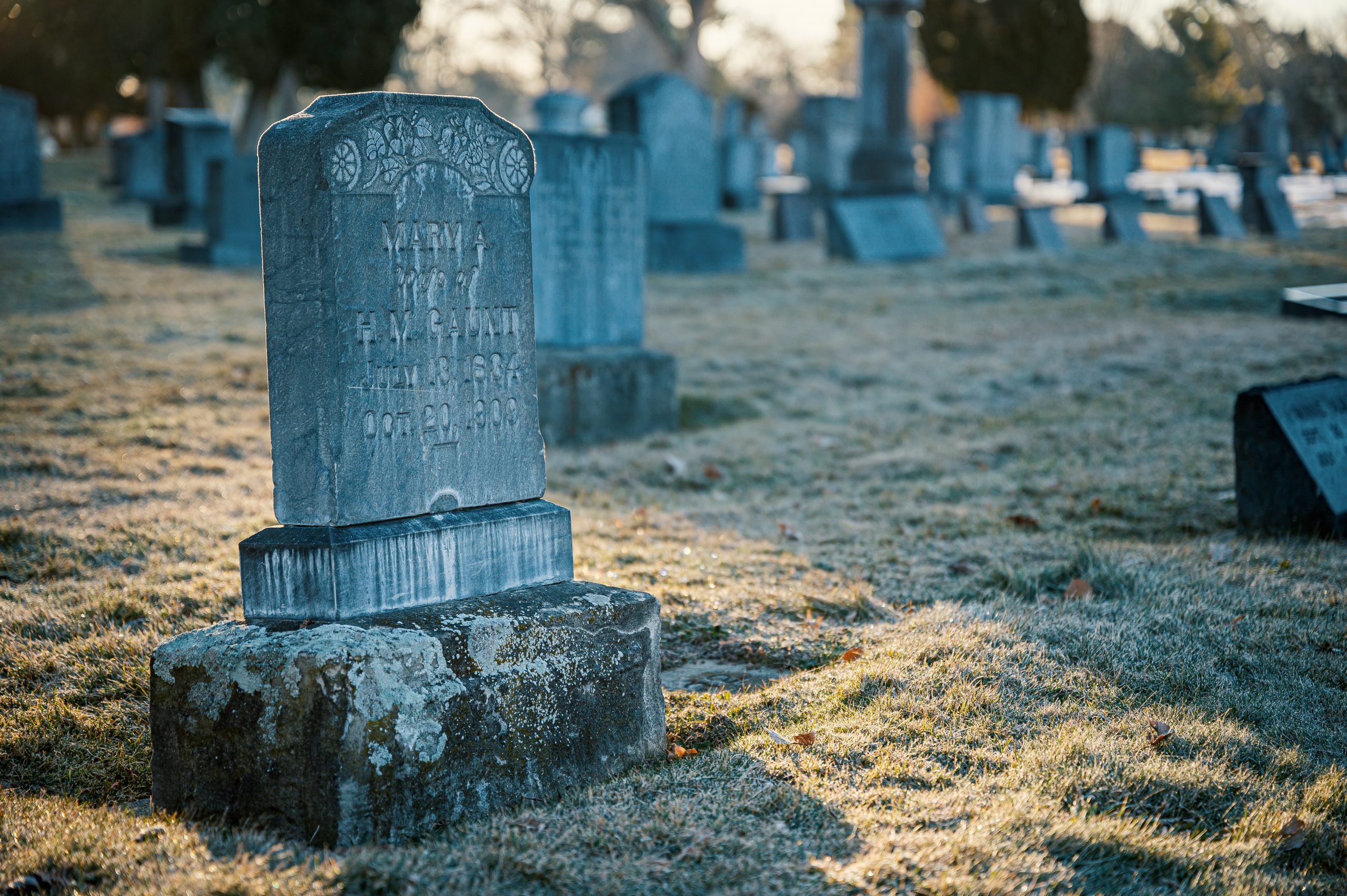 Larry died wheezing in early December, when it was cold enough to freeze your nuts off waiting for him to get underground, but just warm enough that the funeral director did nothing to keep bystanders comfortable, which might raise his overhead.

We, the men, didn’t wear hats. Because Larry never wore hats. Never ever in a city where it was only occasionally bright. Cloudy with a chance of despair was the joke. If it rained, which it did a lot, his unlit cigar just got wet.

He had a dismissive gesture, a wave of the arm that gave you a glimpse of his withered right hand, something that happened in Eastern Europe. Seeing it made you feel guilty, which he sometimes used to his advantage precisely by not drawing attention to what a creep you were for gawking at his hand.

But on the subject of rain and cigars, he waved to no one in particular when he barked, “Who gives a fuck if it’s raining?”

One day in the newsroom, a long time ago, he made the gesture when religion editor Jerome argued for a Catholic story on the front page.

“Who gives a fuck about the Catholics? Catholicism will be dead in thirty years,” he said. Ally and Sarah laughed. Ally was Larry’s No. 1. Sarah worked in features. “I think that’s a no,” Ally told Jerome, who looked more horrified than surprised.

Now Larry was dead and his people were burying him Catholic. Jerome knocked on the casket—closed—at the wake, and said, “Hey Larry, whose gone in thirty years?”

“He woulda liked that line,” I said, hearing it delivered because my time with the casket was up next.

“Who gives a fuck,” Jerome said as tears welled up. He fought to hold them back because sentimentality in a religion editor only confirms other journos’ suspicions.

Back at the graveside, Larry was still dead. Incense burned and was wafted around, dirt got tossed in the grave.

“How completely fucking inadequate,” an investigations editor sotto vocce’d, because investigative editors love to show off.

The casket was lowered into the ground. The last pallbearer to place his gloves on the top of the case, a nephew, looked at them for a long time, slapped them in his hand. He and Larry went to ball games. Larry secretly bragged on the kid, couldn’t help but mention that he’d introduced the boy to single malt.

At the reception, the paper’s staff tried hard to steer clear of Larry’s family, stood in the corner, told shocking, hilarious stories from life with him on the road, along with bitter ones from the executive suite. They tried to get really hammered early in the day, without anybody noticing. Their verdict on Larry: He was a journos’ journo. A tough son of a bitch. A star in the field, a failure in the boardroom. A man with virtually no pity for anyone but lost souls.

I couldn’t get with it, so much wasted anger in the guy, around the guy, but felt sad nonetheless. I’d spent my career being an editor with a notable lack of major success or importance, and few allies in the newsroom. But that quirk in Larry that loved birds with broken wings must have seen something that appealed to him because he’d drop by my desk now and then to recruit me for a quiet, late night drink in a way neither of us advertised and did my career no good. Standing there at the reception after Larry’s funeral, in front of a help-yourself bar, I realized most of my adventures were really his, retold.

There was whisky from the Highlands and I was still stamping my feet from the frost, so I had one. It burned all the way down, chasing the cold out of my bones. I leaned my head back and exhaled.

Ally was watching. “Just takes one,” she said.

“He would find that true and happy,” I said, because the day you bury somebody every thought goes back to them, and also because I wanted to say something declarative that would discourage Ally, a fool without her Lear, from talking to me.

The good news was a suit walked in about then. He and I had a nodding acquaintance, mistrustful somehow, but we had been out for a dinner arranged by Larry on a couple of the same nights. I tried to remember any detail, anything at all. His last name? Fitch. It was a start. The only other thing I could pull from my head was that he’d been a government guy, one of ours, in some way in some Iron Curtain country a million years ago. He and Larry must have overlapped. They had that clubby international way about them. He offered me a refill, I accepted, and he gave himself a generous pour.

“Let’s take a walk,” he said. He nodded to Ally, dismissing her. Fitch guided me upstairs to Larry’s study, which smelled of leather and disintegrating paper and unwashed glasses. Neither of us wanted the desk chair so we got as far apart as possible on the couch that faced it and turned toward each other as well as we could.

I thought it would be trivial. But it turned out there money was involved, more than one should legally carry across international borders, in cash, destined for a woman and her son. They lived on a street full of apartment buildings made from poured concrete in a country that smelled like boiled meat. One of Larry’s old haunts.

“Because you liked his stories, and he thought you needed to see the world.”

“So, you’re not telling me everything about why I’m going because it’s not in the will, but you are telling me why I got picked for the job—so that must be in the will, right?”

A week, three flights, a missed connection, and 40 hours in transit later, I was at her flat, jetlagged and rumpled. Fitch had been able to locate the woman and send some cryptic message like, “Expect a visitor.” What struck me when she opened the door were her eyes, complete ice, absolutely penetrating, so much so that I wondered if she wore silver blue contacts, or if those eyes had been surgically altered. An amazing face, the beauty crossed by lines earned through hard living and deprivation. I was getting ready to speak slowly and loud, as my people do when they meet a European, but she spoke first, in perfect standard American: “You’re Larry’s boy, yes? I’m Vera.”

Vera waved me into the flat, a worn place with wallpaper that would have looked fine in a 1980s  sitcom. Pictures of the son, I presumed, but no sign of him living there. We sat at the kitchen table, where there was a big electric kettle. She made me sour instant coffee, offered me a cigarette. Yes on the coffee, no on the cigarette. She served me, then turned her chair 180 degrees from the table, sat down and crossed her legs.

“He’s gone,” she said, a question made to sound declarative. I nodded slightly. She lighted one of her cigarettes, took a monster drag, and blew out a long, long cloud of smoke. “Crazy son of a bitch, Larry.”

“That’s bullshit,” she said, the bull sounding like the “bul” in Kabul. “I don’t do that anymore.”

She snuck a peek over at me. “C’mon, Larry’s boy, don’t look so heavy. I’m just messin’ with you.” She smacked a hand on the table to wake me up. I took a big swallow of coffee.

“So, like I was saying, there’s money. I was just wondering if I could ask you a few questions first.”

Vera got up, looked out the window over the sink, peered up and down the street, and closed the curtains.

“Well, Larry always said the newspaper bureaus here in his day all seemed to come packed with gorgeous local female staff, and he said, in any office, if you looked around and found the prettiest lady, she was always the spy. Were you our paper’s spy?”

Vera exhaled another smoke cloud. “You know that old joke you American guys have? I could tell you but I’d have to kill you? Well, here it’s not a joke.”

She looked at me dead on with those eyes. It was like getting sliced with a laser.

“You said something about money?” she said.

I pulled out a briefcase, packed by Fitch, which I had unlocked but never opened as I got on and off planes across three countries and thousands of miles, my white American nerd look enough to get me by. It was that easy. I pulled the case onto the table, turned it toward her and said, “Open it.”

She did. There was a greeting card, and neat stacks of U.S. dollars, I could see from my vantage point. She opened the card, read it. Smiled, smoked, smiled, and wiped something from her eye. When she finished she put the letter down, and flipped the envelope to me. The front bore Larry’s handwriting, unsteady but recognizably his. “My favorite spy,” it read. Vera dabbed at her cheek.

“I’m sorry,” I said. “I don’t know exactly what I expected this trip to show me, but I’m a lot sadder now.”

She nodded. “C’mon, Larry’s boy. Let’s go get dinner. I’ll tell you some stories about your boss. How he got that hand. I won’t kill you.”

“Don’t have to do that—dinner, I mean. I could go back to the hotel. I fly out tomorrow.”

“All the more reason to see something tonight. Besides, I’m buying. I just became fucking rich, you know.”

Photo by Brett Sayles from Pexels