Everything Far Away Up Close 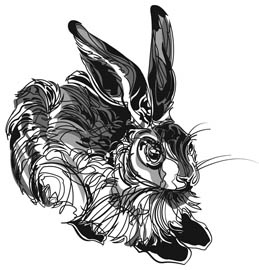 Grandpa Bub grew up in a generation without alcoholics. There were plenty of winos, boozers, lushes and drunks, but that was back when alcohol had personality; it was your drinking that defined you. The winos drank together and the boozers drank alone, the lushes drank what others had and the drunks drank whatever. But I don’t have to tell any of you that. This isn’t my first time here either.

They called Grandpa Bub a moonshiner, and in my eyes that made him a craftsman. He spent days out in the woods tending to his still; holed up under the tarpaulin he’d strung between two birch trees. He may have thought it was hidden, but all you had to do was follow the garden hose that ran from the back spigot. That’s what I did anyway, and I’d go check out his rig of two propane burners, a big copper coil, clumpy brown bags of God knows what, and a stack of old Penthouses. What he cooked out there made his clothes smell like the ammonia farmers put on their fields before the dirt froze. Made his breath smell flammable. If any of you ever had moonshine, you know the smell I’m talking about.

In the winter of 1980 I’m guessing Grandpa Bub had just turned sixty. It was the year he dragged seventy feet of barbed-wire fence down main street at two in the afternoon, the same year the county magistrate installed what had to be the first breathalyzer ever made into Bub’s truck. It sat on the floorboard, big as a microwave, so big it kept the shifter from going into fourth gear. It had to be ten times the size of the ones they got now. I’m sure some people here know them well—the one I got now is black and sleek. I’ve seen them get smaller and smaller over the years. Same car, different breathalyzer: that’s my story.

People ask me if I blame Bub for my drinking, but the word blame is too easy a thing to throw around. You can pack as many people as you want under that word until it becomes more of a pitiful excuse than a pitiful reason. Grandpa Bub was a craftsman at least. He made his product from scratch and enjoyed it. He said his sweat and blood went into that stuff and he meant it in more ways than one. I think of that every time I throw a case of King Cobra into the trunk of my car. Two of them to get through Sunday.

And Grandpa Bub at least drank with Karl, our neighbor down the road, Bub’s apprentice of sorts. Karl was a lot closer to my age than Bub’s, but for nineteen, he had built up a tolerance beyond his years. The two of them got to drinking especially hard when they went hunting. By hunting, I mean they drove around the county shooting rabbits out the truck window. I got to go along by virtue of my breath. Grandpa Bub called me his “Trumpet Man”—it was my job to blow in the breathalyzer and keep the truck running. Bub always drove, never once got in a car unless he was behind the wheel. But back then, if it wasn’t for me he wouldn’t have gone anywhere.

They loaded the truck with everything they needed: guns, ammo, and moonshine, maybe a mason jar or three. They had two guns between them. Grandpa Bub with his over-and-under .410 and Karl with a .17 rifle. They loved to argue guns. Karl complained about rabbits full of shot from the .410, saying he near breaks a tooth every time. Grandpa Bub would make a show of taking out his false teeth. “I ain’t got nothing to worry about!” he said. He thought that was real fun. Karl and me would do our best to laugh and try not to look at Bub’s grey, slug-like gums.

We’d ride the back roads watching for bunnies in the ditches, picking out their gray fur from shadows in the snow. They passed the jar of shine back and forth and I blew the trumpet. I’d blow once to get the truck started and every half-hour or so afterward; it was the beep that let you know. That thing would start beeping and Bub would get all excited—“Come on Satchmo, fill them cheeks!” He held the hose up to my mouth and his fingers fluttered like he was working the valves.

“Rabbit!” Karl said, cranking down his window. He spotted them most the time.

“Stop the truck, Bub. There’s a rabbit back there.”

So he stopped and we all looked in the rearview to make sure the warden wasn’t around. Karl loaded his .17, flipped the safety, and hung it out the truck window.

“You keep that other eye open,” said Bub, “or I’ll stick my finger in it.”

Grandpa Bub, for some reason, shot with both eyes open and felt everyone should do the same.

Like a sickness, an awful silence always settled in my chest before a gun fired. It always seemed louder than the shot—that silent wait that sounded through everything. Karl fired, then opened the door and stumbled down the bank into the ditch. The rabbit writhed on its back, and Karl twisted its head off right there. I could see its long feet still kicking as he walked back. Blood dripped to the snow.

“Another gut-shot,” Karl said at the door. “Crap-bag broke.”

“I don’t know why you use that thing,” said Bub. “Just use the four-ten and get it over with.”

“I’d shoot them with a Daisy before a shotgun.” Karl threw the limp rabbit into the truck-bed. “Ain’t much sport shooting from a truck window anyway.”

Karl said that all the time but there’s no chance either one of them could hunt like real hunters. They weren’t ever going to walk through the woods with snowshoes on their feet. After an hour they probably couldn’t stand much less walk, and the cab that had started out full of back-slapping and chatter would grow silent, both of them lost to their own thoughts and me in the middle, breathing into the hose.

We got up into the hills and found a Level-B with no tracks on it. Bub loved being the first to cut through the snow on these back roads, where the snow blew sideways through the middle of nowhere. The drifts along the road would sometimes be taller than the truck and the trees reached out of them like hands. When we’d get high enough on a hill, I’d look out and see a desert of snow.

“Might see a quail covey down in the brush,” Karl said.

“Don’t even think about asking for my four-ten. You can shoot each one of them with your seventeen.” Grandpa Bub laughed and I laughed too, but I didn’t understand guns enough to be sure what was funny.

“Slow the truck,” Karl whispered. The way he spoke I thought he spotted the nose of a patrol car up behind the roadside scrub.

Karl slapped the dash this time and I saw why. Far up the road, I caught it just for an instant: a flash of gray I figured too big for a rabbit, could’ve been the head of a bobcat, maybe—if the rest of its body was hunkered down in the snow, I mean. But then I saw the ears like paddles, and I knew.

“That,” said Karl, “is a fucking jackrabbit…

Nick Bertelson currently lives in Iowa and works for a drywall company. His stories have appeared in places such as The Coe Review and The Raleigh Review.