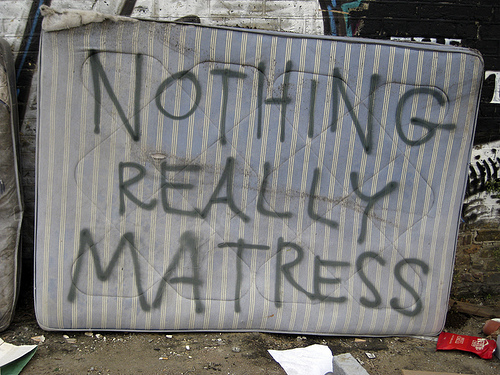 Brian hasn’t always held a Mattress Fair sign on the side of the road. Before Mattress Fair, he worked as a BB&T bank teller until his second DWI, third manic crack up and third day late to work, then he sobered up, took his Lithium and manned the Bojangles drive-thru—they liked his teller experience—until he relapsed and his girlfriend dumped him for a fifty-two-year-old biology professor, kicked him out of her house, and stopped giving him rides to work. Now he lives in the homeless shelter and is shuttled to work every morning by Woodrow Jennings, a high school junior who wakes early to ferry Brian and others to temp jobs before homeroom bell. Sometimes, the shelter men and women sit outside their jobs for an hour until a supervisor or manager arrives.

Jimmy Ray Thomas, an ex-convict who pumped mad prison iron, is the shelter’s backseat chaperone. If someone tries to grab Woodrow’s neck, he’ll “smack ‘em upside the head and beat the brakes off ‘em, ain’t that right, Woodrow?”

The passengers will groan, sigh, and suck their teeth at the punkass bitch applying to fancy colleges.

“College boy,” a man will say.

“Do what?” Jimmy Ray will say.

“We want no trouble,” DeQuan will say.

DeQuan is the shelter’s best musician and plays the raggedy donated guitars and keyboards during chapel.

“He chirpy,” a woman will say.

“Get with God and you’ll chirp too!” DeQuan will say.

“Lord,” another woman will say.

Brian will sip his Styrofoam shelter coffee. This is every morning.

Woodrow has said, within earshot of Brian and DeQuan, that he’s improving his college applications. “There’s a great essay in this,” he once told Pastor John, the shelter’s director, in the hallway separating the bunks from the chapel, where Pastor John delivers sermons. Brian and DeQuan sat in the back pew reading King James Bibles. Brian doesn’t care about God or the King James Bible but is eager to impress Pastor John, who might be a solid reference on future job applications. In a recent Wednesday sermon, Pastor John said he “believes in the humanity of the mentally ill” and equal opportunity for “the afflicted and addicted.” Brian likes Pastor John’s compassion and eagerness to help those less fortunate. He doesn’t want to hold the Mattress Fair sign on the side of the road forever.

Mattress Fair is always Woodrow’s first and last stop—he also transports them back to the shelter in the late afternoons, after school—and whenever Brian exits the shelter’s blue Aerostar, DeQuan yells out the window, “Blowout clearance!” DeQuan says he can’t help it, that it’s something in the two words stacked on the orange-and-black sign that sound like music. DeQuan has seen the sign because Brian sits in the folding metal chair holding it until the van pulls into the shopping center’s parking lot. By then, Brian’s ass, hands, arms, and shoulders are sore and he’s thinking of all the fuckwads who’ve taunted him throughout the day. Often he’s considered hurling the sign in the road, or jabbing the pole through a windshield, but then he’ll think of Pastor John delivering one of his Wednesday or Sunday sermons and discussing the importance of remaining humble, or something like that—some life lesson that reminds him he can’t fuck up anymore, that he’s almost out of chances, that hurling the sign in the road or jabbing the pole through a windshield would be a bad idea, even if the fuckwads deserve it, so he’ll close his eyes, breathe deeply, count to ten and think of Pastor John at the pulpit.

“Blowout clearance!” DeQuan yells, craning his head out the window until Jimmy Ray closes it.

Brian watches the van pull back onto the strip surrounded by fast food and chain stores, then peeks through Mattress Fair’s glass to see if Terry, the manager, is inside to hand him the sign and chair, but he’s not. The store opens in an hour and Terry is probably kissing his wife goodbye or putting his kids on the cheese box. So Brian sits cross-legged on the sidewalk and waits—to weather the fuckwads, to do Pastor John proud.