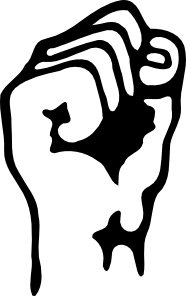 My boy, Tanner, has got himself in some mud up at the school. The principal, Mr. Holler, called me at work, and now I have to go and look that man in the eye, and try to keep my temper. Hours of lost wages, insurance premiums on the rise, and we both know my boy probably did whatever they’re accusing him of, but I can’t let that man stare me down no more, or my own boy won’t respect me at home. Raising boys is like training dogs. You’re always the alpha, you never back down, and you demand respect.

When I get to the school, I have to wait for them to talk to me through that little box, peer at me from their camera, wait for the door to click before I can come in, like they don’t know I’m coming, like they haven’t seen me five times already before Christmas. Tanner is sitting up front swiping on his iPAD, smiling and winking at some girl, like he ain’t worried at all. I may have thought that life was a joke too, when I was his age, but at least I had the decency to keep the punchline to myself. I give him a curt nod, and the little shit laughs. I knows it’s something the girl did or said, but if we’d had been at home, I would have socked him one right in the mouth the way my daddy did to me. Hell, I’m standing there signing in, giving over my driver’s license, smelling the glue and paint from the renovations my tax dollars paid for, and I’m starting to think my daddy was right for waling on me so much.

The principal comes out like he’s dressed for a funeral, tie clipped snugly to his sad blue button-down shirt, looking me a little too directly in the eye for our age gap, before shaking my hand firmly, but flatly, asking me and Tanner to come on back.

“Mr. Holler, I’d like us to talk first before we bring the boy back.”

Tanner, standing next to me, his head already inching past mine when he stands up straight, says, “As long as I’m home for supper,” before sitting back down resuming his flirting. It’s an old family joke, that used to be kind of sweet, but the boys, Tanner, especially, has turned it into some kind of mockery. I wave Mr. Holler toward his office.

Inside, the room is wide and airy, the school colors of blue and gold painted on the walls. There’s his diplomas and pictures of his kids. A football helmet from his one season at junior college before his knee got ripped to shreds by a 280 pound linebacker. In a town like ours, people know everything about the teachers and students at the school. We all shop at the same supermarkets, go to the same Applebee’s, and hang out at the same lake in the summer.

“Mr. Timothy, I’m at a loss for what we can do about Tanner. This is the second boy he’s punched in the last two months. Swears he didn’t start it. Says he was sticking up for a girl, that the other boy was calling her names.”

Sitting in this padded office chair, it feels so easy to give in. I’m bone tired, though this isn’t different from any other working day. “It could be true. The boy sometimes has his reasons. He was gentle once.”

Mr. Holler picks up a small football from his desk, grips the seams, his wrist flexing. The way he used to control that ball, the regret arched across his shoulders. We all got burdens we carry like oxen, dragged through the world, circumstance our taskmaster, bringing down his whip when we stumble.

“If he was just more like Jake, hell if they all could run like Jake, we could do more for him. Let a few of these indiscretions slide.”

“Don’t say his name. I thought everybody knew that by now.”

Mr. Holler held up his hands. “I’m sorry. Honestly, I miss the guy. Thought about joining myself, but after the scholarship…”

The anger my daddy thought he beat out of me bloomed like moss. I let the moment hang, trying to remind myself that Mr. Holler is just a kid putting on grown-up clothes. Jake was my oldest. He could hit the seam between tackles before the defense was even set, glancing off shoulders pads and outstretched hands. He led the state in touchdowns his senior year, but he never even got a chance to out run that IED. The Humvee he was driving took the blast right over the center of the undercarriage. All the metal and bone and skin. We can’t even say his goddamned name at home.

“You can punish him, by God that’s your right. But you know I got to raise a fuss first, otherwise he’ll think I don’ care about him. That I’m too weak, that he could do whatever the hell he wants.”

“I can take a few threats. Maybe a few swear words too, but remember I have to keep order around here too. Those people out there,” he waves the football toward the door. “I need their respect. This job, Mr. Timothy, is a lot harder than I thought. And Tanner isn’t making it any easier.”

Mr. Holler gets on his phone and has the secretary send my boy in. Tanner walks in, tablet held in his hand, flopping against his thigh. He walks in front of me, taking the seat to my left. I catch a shallow whiff of what I think is Jake’s cologne, the kind he’d use to try to hide the smell of weed that swamped his room the year before he left for basic. Tanner slouches in the chair, IPAD chittering in his lap, some moronic game flashing. I’d break the damn thing if it wouldn’t cost me so much to repair it.

I snap that device out of his hands, my anger gearing up like water in a boiler, a few bubbles popping to the surface. Tanner just shrugs his shoulders as if he’s untouchable, a smirk forming, waiting to see what’s he’s put in motion. I turn toward the principal, shaking the tablet at him.

“You want your culprit. It’s this technology. Fries their damn brains. Makes everything a goddamn video game. Nothing’s real. Not pain. Especially not death. So you want to suspend him you go right ahead.”

I hear that word calm and I’d like to punch something or someone myself. Calm is the word used by the pretentious, never had a bad day, because I been handed everything my entire life, but before I can get going Tanner is standing, shouting.

“Nobody here knows a goddam thing about what I need. Nobody wants to be here except those prissy honor’s kids and the band freaks. You think I won’t punch them again, you’re wrong,” Tanner says, pacing near the knocked over chair.

Something is telling me that this is going to get out of control, that the little charade we rehearsed isn’t going to happen, that Tanner always was the wild card in this situation, and like usual I’ve misread his intentions.

Mr. Holler comes out from around his desk, hands open, palms up, a walking joke from one of those de-escalation videos they even make factory workers watch now. I’d laugh if it wasn’t so insulting.

“You best stay behind that desk, sir,” Tanner sneers, his fists clinching with the rhythm of his heartbeat.

Everything is speeding up. I’m reminded with a jolt of Tanner at three, the way he’d run around the playground, a look of complete joy on his face, until he eventually smacked into some other kid, the way they’d fall and start crying, the way Tanner would tower over them, always curious at their pain, never sorry, the way Jake could get him to listen, and later when they were older, Tanner in fourth or fifth grade, the talks they’d have in private, before Tanner would apologize, Jake standing there with his hand on the boy’s shoulder. We could all use Jake’s hand now. Three is an unlucky number, someone always taking the other person’s side, an odd man out, and as a father you hated that person to be your son.

“Now, Tanner, your father and I were talking before, and we agreed that if you’d just be a bit more like Jake…” Mr. Holler edges his way around the desk, his belt buckle creaking.

I stand up and the bones from my ankles to my hips crack and pop. The pain is getting harder to ignore, the way it radiates the brain, little Ozone holes in the thin layers of trust, patience, and gentleness that my mother tried to foster while my daddy wasn’t looking. He knew I had to have some rough and tumble in me, and boy had he won.

“Do it, Dad,” Tanner says, as if he knows exactly what I’m up to. And maybe he does, maybe he knows exactly when clinching a fist isn’t enough, when knuckles have to make contact, erupting like the flame of a acetylene torch, when violence is the quickest answer. His voice almost stops me, but his pride spurs me forward. Mr. Collier steps back, his youth another reminder of my loss. How badly I want to hit him. Instead, I rake my hands across the edge of his desk, sending the framed pictures crashing to the floor. How often we use glass to protect the things we care about when it’s so easily broken. In the confusion, I grab Tanner underneath the shoulder and hustle him toward the door. I’m not sure what it means that I want to so quickly apologize and help Mr. Holler put his family back together, but there’s no way to explain my grief.

When we get in the truck, I don’t let it warm up. I rip the gear shift into reverse, tires squealing like I’m eighteen again. I know there will be hell to pay for this. You can’t knock over a man’s pictures of his children and not pay some kind of consequence, but I look over at Tanner, hoping to see the same thrill of adrenaline I feel, that camaraderie, of two guys finally tipped over the edge, his face flush with admiration, but whatever he may have felt fleeing that office is gone, his eyes mutely glaring at the screen, angry or bored, as if nothing abnormal has happened. And I’m left trying to name that feeling when you want to explain to your son that you know why he’s doing this, the pain he’s avoiding, but this knowledge won’t stop either of us from hurting everyone else.

Bio: Tommy Dean is the author of a flash fiction chapbook entitled Special Like the People on TV from Redbird Chapbooks. A graduate of the Queens University of Charlotte MFA program, he has been previously published in the Watershed Review, TINGE Magazine, Split Lip Magazine, Spartan, Hawaii Pacific Review, and New World Writing. Find him @TommyDeanWriter on Twitter.
← Holiday: a Monologue on Family and the Things They Leave Behind
Homer Postcard & Victim of a Crime →