All the Birds Scattered 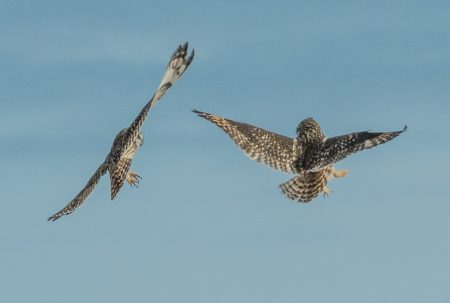 They were at the target range, an array of rusty cans nailed to the remains of a wooden fence. Daddy rummaged in the gun box. “Jody, get yerself over here,” he yelled.

Jody scuffed through the dirt to his side.

“Look here,” he said, laying out shotgun shells and rifle bullets. “A good hunter knows his weapons, so if you want to be a hunter, you need to listen up.” He explained the difference between shotguns and rifles. She’d been using a rifle at the 4-H camp practice range, but today she would learn about shotguns.

The hot dry air was filled with the scent of sage. A big bowl of blue sky covered the world from one horizon to the other. An eagle, or maybe it was a hawk, circled overhead screaming.

He handed her the shotgun. “You ready?”

Back home in her room, Jody had a stack of paper targets from 4-H camp, all of them with bulls-eyes that she herself had gotten. Daddy had even tacked one of them to the refrigerator.

He nodded toward the cans. “Try for the one on the left.”

The can on the left was large, maybe an old gallon paint can. Her targets were all a lot smaller than that dumb old can.

She lifted the heavy gun and squinted. She squeezed the trigger and the shell exploded from the barrel. The stock rebounded, slamming hard into her shoulder. Birds scattered in a flurry of wings and dust.

He turned a bright smile toward her. “Good! You got it. Try the next one down the row.”

Her shoulder hurt like crazy, but he was beaming at her and she pretended to feel nothing. She reloaded and fired again. Another perfect shot. And another. He shouted “Good!” and “Great!”

After Jody had worked her way down the row, piercing each can clean through its middle, he turned toward the pickup. Mama was sitting inside, by the open window. He shouted to her, his hands around his mouth. “She got every last one of ’em. Told you she was a natural.”

Something caught his eye. He pointed at the hillside. “Look.”

“I think it’s an owl.” He turned to Jody, his eyebrows high. “You could get it. You’re a perfect shot, you know.

She peered at the hillside. Was it really an owl? All she could see was a dark spot. Maybe it was a rock. A tiny hole in the hillside, a cave. Maybe—

“Go on,” he urged, giving her that proud smile. “You’re a perfect shot.”

Her hands were shaking as she lifted the gun and aimed.

It was just a dark spot. It hadn’t moved. It must be a rock.

All the birds had scattered at the first shot.

Jody closed her eyes and squeezed the trigger. When she looked again, the dark spot had disappeared.

A shotgun shell couldn’t blow a rock to pieces just like that.

She shoved the gun into his hands and turned, walking as fast as she could toward the truck, trembling violently.

She heard him call out behind her. “Marge, come look at this! Come see what Jody done. She’s really getting to be a great shot.”

Mama creaked the pickup door open. She headed for Jody, but Jody wouldn’t meet Mama’s eyes. Jody’s feet were frozen to the ground. She stared at the dead, dry soil, all the pride she’d felt earlier draining down through her legs and out her feet and into the dirt.

Mama held out her hand. “Come on then.”

Jody shook her head and held onto her own hands, but followed behind Mama as she made her way toward Daddy. He motioned to her to follow him up the hill. Jody walked a few paces behind her parents.

She could see the feathers before they reached the place where the dark spot had been. Brown and white, hundreds of them scattered over the dirt, some dangling from sage branches. She thought she saw a piece of pinkish flesh on a clump of feathers, but looked away fast.

She tried, in her mind, to put the brown and white back together into an owl, but it didn’t work.

Mama’s hands were on her hips. She was facing Daddy. “How could  you?”

“How could I what? A hunter needs to learn how to kill.”

He turned and stomped away, heading for the truck. Mama flew after him. Jody could hear the sharp staccato of their argument wafting up toward her. She didn’t follow them, but sank to the ground, surrounded by brown and white feathers. A scream came from overhead and there was the hawk again, screaming and screaming and circling and circling.

Before moving to Washington DC, Raima Larter was a college professor in Indiana who secretly wrote fiction and tucked it away in drawers. Her work has appeared in Gargoyle, Chantwood Magazine, Mulberry Fork Review, Linden Avenue and others. Her first novel, “Fearless,” has just been published by New Meridian Arts Press. Her second novel, “Belle o’ the Waters,” will be published by Mascot Books, later in 2019. Read more about Raima and her work at her website, raimalarter.com.

Photo by Richard Lee on Unsplash

← Waiting For Her Man
Animals Maul Me →