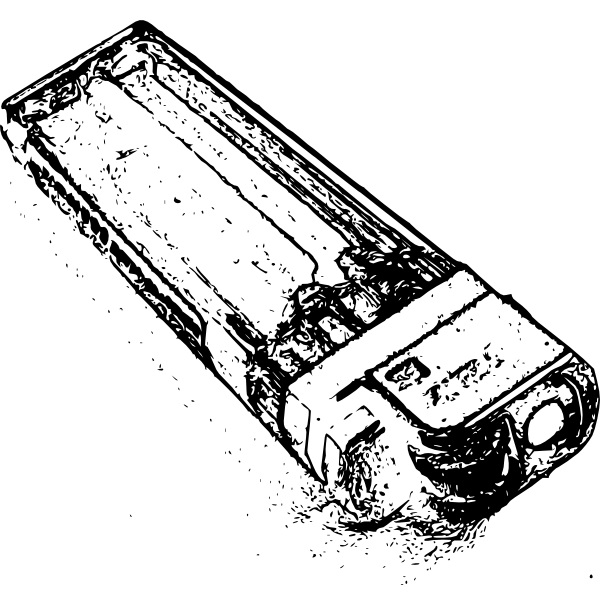 Mama don’t remember Tío Kiko taught me to tattoo myself—I bet no one does but me. We were out in the big back yard behind the kind of long flat house we got in California, leaned against his Bronco in the shade of the avocado tree we all got in California too. He said proudly, with his mustache flared, All you need’s a Bic pen, a lighter, and some shoe polish, Lil’ D. Why don’t you go on a mission?

He’d been in the army a long time ago. Mostly he’d been in the pen. Still, he liked sending me on missions. Sometimes they were missions for him, like to the fridge for a cold beer. But sometimes, like this time, the missions were meant for no one but me.

I brought him the pen and he stripped it like a rifle. He tugged the ink and roller out with his teeth and spat the piece at my chest. I understood that I should hold it because he could make you understand things like that, with only his eyes and eyebrows, how they moved up or down and weighed how much you were worth. He put the needle in place at the tip of the empty pen and used his lighter to melt the plastic around it, until the pen gripped the needle in black folds like lava.

He practiced drawing pictures on a Frisbee, blowing away the tiny worms of plastic that coiled from the needle’s tip as he carved. The little skeletons he drew were happy but nearly invisible. He covered them with shoe polish and rubbed it in with his thumb, and I bit my tongue because I’d thought he’d ruined them. But he spat on the Frisbee and rubbed again. The shoe polish faded and the skeletons danced to life, dark enough to last forever. Your turn, he said, floating the Frisbee across the grass. He took a seat on the Bronco’s tailgate. Where you want it?

I hadn’t thought that far ahead. It would be some kind of insult, I thought, if I gave the wrong answer after he’d shared the entire ritual with me. I looked at his tattoos—the girls’ names scrolled and curled on his neck, and the ones on his chest in Old English script that he wouldn’t talk about. On one arm he had two faces, one smiling and the other crying, clownish and sad at the same time. It made me wonder what kind of adult I’d be. I offered my right arm up, raising its weight with the other, the way you lift your hands at communion.

Mama scrubbed at it with a rough sponge that night, while all the others slept low to the ground. From the sink I could see the empty beds, I could see the huddled shapes on the floor, where it was safer from bullets. The phone had stopped ringing and I liked the quiet.

Mama didn’t. She could hear how hard she’d been scrubbing and went easier.

My sister had gone out with someone else. Tío Kiko wouldn’t stop calling the house. This new guy had come to pick her up and I asked, Who’s the fag in the Honda? She smacked the back of my head, clicked her dark lips and told me, We don’t need to hang with no fucking criminals no more. From the front window I watched her drop into the passenger seat of that low car, and I could see by their silhouettes she was giving him directions, telling him where to go. He was no Tío Kiko, I thought, who took us out on Sundays and cruised through the neighborhood like a map was tattooed on the back of his hand.

Now his Bronco rumbled where the Honda had been.

He kept calling the house, calling out his window, and waving his pistol out the window too. He said he’d shoot everyone and circled the block. He just wanted to know where she was, he said. He couldn’t drive away because that would mean quitting. But he couldn’t sit out front waiting on her, either. Even I knew that.

The phone rang again. Mama stopped scrubbing. Why are you crying? she asked. The flesh of her eyes was tired, but the eyes themselves were not. All I could think of was how much it hurt.

Outside, tires screeched. The sirens said someone finally called the police.

Mijo, Mama said, and started scrubbing again, softer now, barely touching me at all. By then she wasn’t in the room, not really. He won’t hurt us. He’s a crazy. He’s on drugs. The cops will get him now.

But when she said that I just cried harder, and it hurt in my ribs and my throat, and after a while she left me to cry alone on the sink. I touched the skin on my arm and traced the tattoo’s shape in the welts, but like other constellations, you had to know they were there to be able to see them. And if you looked away, when you looked back… There were no faces. None sad or happy. Like all along they’d both been a couple of ghosts.

Christopher Rosales is the Fiction Editor of SpringGun Press. He teaches at The University of Colorado - Boulder, and at The Boulder Writing Studio. Most recently, his work is forthcoming in 5280. Lindsey Clemons at Larsen-Pomada Literary Agency represents his novels. Feel free to contact him at Chris at boulderwritingstudio.org.