A Man, a Woman, & a Fetus Walk Into a Maternity Ward 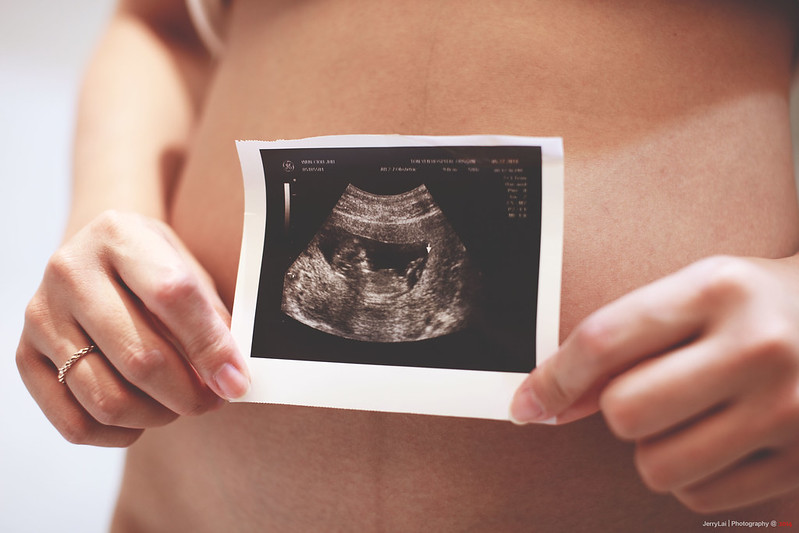 The day my child came into this world lifeless and cold, I was writing jokes for my standup routine. I didn’t love the woman who was crying in the bed next to me. I mostly thought of her as the wrong end of a bottle of vodka or the face next to a trashcan. Sorry, that is a little too harsh. In the shower, on the morning after, I thought of her as beads of water fell from my showerhead, circled around my neck, and ran down my navel. Their trickling and tickling trails reminded me of her fingers.

The night washed away. It was two weeks before she thought of me again. For her, the same sensation was much more rushed, and a lot less pleasant, because it was morning sickness. She weighed her options during each day while hunched over a toilet. Eventually, she called me to scrub her hair. I thought it was a strange request. She had grown tired of rewashing it. It sounded funny, but I couldn’t explain why.

In the nine months since the party, well six, because she took three to tell me, and the sloppy details you already know, I dreaded the birth. It never occurred to either of us, we might skip it, and head straight to me crouching over hospital stationary, and her lying in bed staring at the ceiling. At first, I thought this was our first post-parenthood fight. (At some point in the second trimester, she threw avocados at me.) Sadly, it appeared I was the only one who didn’t understand what happened in the moments after the birth. Her formerly buzzing phone might have known the answer, but it was in two pieces. She drew the drapes. The whirring of an electric switch, and the scratching of my pencil was the most we talked.

I was told I watched her with less than eager anticipation inside the crowded birthing room. I remember it from the other side of a window, holding a balloon that suddenly popped, and then a laugh track rolled. Everyone froze. Our heads bobbed around looking for someone to explain the punch line and continued searching out the door. Silence stuck around. He was not good company. My last memory of the delivery hung unanswered. There was a cold hand on one shoulder, and an urge to vomit like on the night where all this began. A little bit of my body floated away, and my life split into before and after birth.

I had not known this woman, besides remembering our pity sex, which is sex for sad and lonely people who got tired of masturbation or looking at pictures online. It was sex initiated by her slosh to my arm, and later a tumble to the space next to my bed. In hindsight, it was probably karma that we created a life after we drank the life from so many bottles, or when I watched so many ghosts spill from lips and nostrils. Maybe that was foreshadowing. Was there a ghost above us now pushing the fan blades in a circle or rattling the air conditioner? Welcome to the new world of after. I knew the corns on her feet, swollen and fat. I knew her mood changes, and cravings, and highly regimented schedule with pink and blue highlighter. It was homely. It did not really feel like after, because she remained all those things, but lighter.

I tried to blot out her sobs as I pressed my pencil to the paper in the hopes of inventing some new jokes.

“You know what the worst part of stillbirth is?” I wrote. “Having to tell everyone you were only a parent for five minutes. I mean think about it, so many people get to talk about being a parent with all these great memories. I remember watching him play soccer. I remember her first ballet lesson, or if you’re one of those modern liberal parents, I remember watching her play soccer. I remember his first ballet lesson. What is my gal going to say? ‘I remember it pushing out of my vagina.’ Do we even get a gender? You never know in this day and age, he could have grown up to be the first woman president.”

I scratched out that last line. It seemed too harsh. The joke I wanted to make was about sadness, not about gender identity. It was probably my own nervousness coming out on the page. I didn’t think I would have been a good parent if my child came out as gay or transgendered or had an affinity for pop music. My thoughts were interrupted by another loud sob coming from the bed. I looked back over the intro again and realized the second joke seemed like something someone could have said before. I decided to circle it and put a big question mark by it. Would it be crueler to plagiarize?

“What are you writing?”

“Why? How are you laughing?”

“I’m not laughing. I’m letting a pen do the crying for me.”

She tossed a pillow at me. It was covered in snot and tears. My paper was unblemished. Why did they let me into the room with her?

“How are you writing jokes?”

“Because I just realized I can once again tell “your mother” jokes without feeling remorse.”

She gave a gasp that was somewhere between the groan she saved for when our child came home with his first nose ring, or maybe the squeal when our baby brought home her first forty-year-old lesbian artist lover. Our daughter would be twenty at the time, and claiming she just experimenting, but we always suspected she was hungry for more than our all American meals of hotdogs and spaghetti and meatballs. Could you get that joke across in two lines? Didn’t it sound like incest? Did it matter? There wasn’t a daughter or son to commit incest with. I started to giggle. I just realized I was free from making every bad mistake a parent worried about. My child would never experiment with drugs, or get pregnant in high school, or become a musician. All those fears that piled up beneath parents’ beds, while the child grew worried about math tests, and looking cool, would be laid to rest, next to our child.

Another pillow smacked me, and I tried to stifle my laughter.

“Why aren’t you happy? We never have to see each other again?”

I imagined both sets of grandparents stifling their bickering over first Christmas.

I looked over at the bed, and the huddled form gripping the sheets. We had talked on and off during her pregnancy. Enough that our plan for involvement was setup for the day after tomorrow. Outside, the same previously hopeful grandparents accidently dropped toys from their nervous clutch. Neither one checked if it was a donation bin or a trashcan. I assumed we would have to talk more, but about funeral arrangements, and then I began wondering if that could be a joke.

“You know why I prefer to plan a funeral than a first birthday party? You only have to plan one funeral; you have to plan like twelve birthday parties. It’s only twelve parties because then they get into those awkward teenage years where suddenly a bouncer appears and you can’t get into your own house, that’s only if they don’t turn out to be a nerd, then it’s twenty one.”

She gave me a look I saw a lot afterwards. It first appeared on a coworker. She said “The things I wish I knew at 25,” and I mumbled “Like how to browse infant caskets?” The face appeared on trains, planes, and bus stations, because I started to stare at every tantrum, and hate myself. The look “I could do better” smeared across my face. I was some super Dad. I just didn’t have the mug to prove it, but I had great skills. I knew how to cut a turkey. The holidays lined up in that room, each one plastered with the same disposition, and reminded us that we couldn’t schedule ourselves into just one day a year to miss our child.

“You didn’t want to know the gender.”

“It is the last of life’s great mysteries.”

“Why did you want to know the gender?”

“I didn’t want everyone to have to buy two balloons.”

She chuckled, and I felt a little better. I remember when she told me she was pregnant; the first thing I asked was what was her name. She hit me. I learned she was one of those morally grey Christians who didn’t believe in abortion, but was okay with premarital sex. I asked why, and she told me she hadn’t been baptized yet. She told me to keep photos off Facebook, because not all of her family knew. Then, she asked about me.

I told her I was a pagan, a college dropout, worked as a deep fryer, and was trying to become a standup comedian. She asked if I was serious. I told her no, that I worked for a nonprofit teaching underprivileged youth. She asked me to look into fry cook positions because at least they came with money. I told her we weren’t getting together. She told me it didn’t matter; I was still paying for half of this baby. We decided to meet more frequently to get to know each other a little better. We debated moving in together. Not together, but just so we wouldn’t be on our own.

We couldn’t go for coffee because she was pregnant, or sushi. We could do yoga, and eat blue berries, so while she gained weight, I lost it. I moved out because I missed cookies as snacks, rather than seaweed, or kale, or tofu, or whatever non-food she wanted.

I think that was when the first avocado was tossed.

We also bickered about parenting styles. I enjoyed reading the books more. I felt they were more helpful. She enjoyed, something. I don’t know parenting blogs or classes. Now, we got the enjoyment of having to bicker about mourning styles. What else was there left to fight about?

“What was its name?”

We went down the hall, not together, just at the same time, because I was pushing her in a wheelchair.

Hank Morgan is a writer from Austin, Texas, and has previously been published in Sigma Tau Delta's The Rectangle, The Flash Fiction Press, and the Dead Mule School of Literature. He is currently living in Seattle and burning MFA fiction to cook ramen.