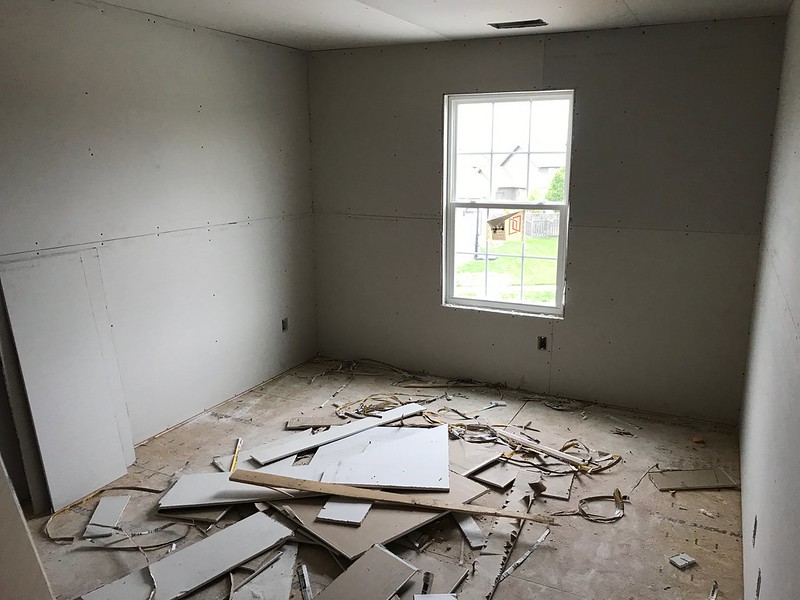 Today my eyes are filled with drywall dust. The gypsum fire deterrent bonded by thin cardboard breaks easily with the prying crowbar. The new house gutted and needing more work than expected; holes in the sheathing from pests and soggy with water damage.

I just wanted something to go our way, for once, Amy says. We’ve been living with her parents the past three of our twelve years together, struggling to save for a loan. Her eyes overflow like a blocked gutter.

I’m the first in my family to attend college. In Child Development (a requirement for Music Education), my hand raised along with most students for Who has a memory at 4-years-old? A time period, the professor claims, when most children’s cognitive memory forms. My hand fell with everyone for Who has one earlier? I didn’t want to be the only one remaining.

I was in Yogi Bear’s basket at Jellystone Park. It’s the only time I can remember Dad before he abandoned us. How can I remember this, when he left at my one-year birthday party? I didn’t know what the word was then, but I could feel the tension, like a grated bridge you can see through to the below. Yogi Bear’s face must hurt, always smiling. Mom and Dad left me in my carrier while they screamed resentment.

I wonder when he created others. The other thirteen half-siblings across the country from Ohio to Alaska before getting arrested for holding his father at gunpoint. Siblings who would find me online, seeking me out as the oldest — his first mistake.

Today my chin is hidden behind tangled beard hair. Grown back and unkept since the start of quarantine, my first shave after litigation. We settled out of court, but then again, there’s the NDA. Starting a business with people I didn’t know as well as a thought I did. Reminding me that trust is a permanent marker writing over itself.

Everything was cool to me in fifth grade. I’d say it for each birthday present I opened in that pubescent voice which was changing, somewhere in between destinations like a screeching brake on a road trip.

My clothes were baggy so they’d last another year or two. Mom’s boyfriend at the time suggested having the party at his bowling alley, while he was in town off the pro circuit.

My aim needed bumpers to make it to the end of the lane. I cried when mom said they got engaged. The radio station played Blink-182 with a birthday dedication from the pro behind his new camera.

Today my mouth is pizza, all I consume during demolition. Toppings fill every gap in my brick teeth and space them apart like water freezing. It took three months to get into the chair for the dentist to pronounce the back is decaying. No problem. Easy fix.

Did Mom know about the other women when she left Dad and moved us in with Grandma?

Knowing if someone is being unfaithful isn’t as obvious as a black eye. His women, bruises covered up. Was he getting it out of his system, knowing he’d be alone in jail later?

I wasn’t a person to him. I was a result. The end product of teenagers going through the motions.

It took me six years to graduate college, but it’ll take me a lifetime to pay the loans off. I couldn’t afford the dorms for long, it took me an hour to commute. I drove past our old home with Dad. Were these the roads my mom told me about? The lanes so close. So close she considered letting the car wander into oncoming traffic.

My mom never stopped smoking since someone taught her how at 14—thinking she was so cool. Was that what led Mom and Dad to meet in the back of a closet their senior year? Clothes hanging up like reason pushed aside, learning it only takes one time to never go back.

Today my nose is crooked. I thought it was from my Honda Civic flipping on Rt. 422 last year. I hate to break it to ya, Amy says, but it’s always been bent. I always thought it was my nose. No one else’s.

I call him Johnny Appleseed. Leaving spawn throughout the states: Ohio all the way to the twins in Alaska. The ones who haven’t searched me, yet.

The police found Dad when he held his father at gunpoint, arresting him and forcing payment for the backlog of child support.

My mom was in Texas with her sister when she received the first three installments of child support he owed her. She bought the entire bar a round of shots.

I wonder when she found the time or money in between dating and working the nursing home to wrap her baby diapers.

It’s always the same elevator in the dream—Fenn Tower, top level 19 where I used to dorm. It free falls and I think of the Myth Busters episode where they prove the highest you could survive is five levels. Even then, you have to lay down flat, knowing you’ll be breaking most of your bones. I can’t though. I float to the top of the falling room, a balloon at a children’s birthday party. Unable to see the ground, I fall endlessly, never knowing when it’ll hit.

Today my head is filled with putty. Rolled into snakes, slithering around what Amy is calling The Kid’s Room. Every step of my life I’ve carefully conceived throughout struggle. Avoiding mistakes like potholes in the road that inevitably will be overlooked but shake my body with their presence.

When I packed for college I found the letter, handwritten as I’m sure his attorney instructed. He asked my mom to remember. The closet. The good times. What’s Corey up to these days?

Seeing his mugshot and that fucking nose, stolen along with my childhood, I wanted to meet him. I wanted nothing more than to visit him in prison and punch him right in that nose with everything I had behind it. Let them arrest me. Detain me one cell over from Dad’s.

Amy and I rebuild this house with all its flaws. I spackle over these patches and dents in the wall, sanding them down flush where we plan on raising a child. Walls so smooth that no one would ever be able to tell there was undisclosed damage beneath.

Corey Miller was a finalist for the F(r)iction Flash Fiction Contest (Spring ’20) and shortlisted for The Forge Flash Competition (’20). His writing has appeared in Third Point Press, Pithead Chapel, Lost Balloon, Hobart, and elsewhere. When not working or writing, Corey likes to take the dogs for adventures. Follow him on Twitter @IronBrewer or at www.coreymillerwrites.com