Get a Grip on Yourself 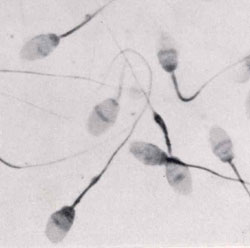 Considering the amount of money we’re spending, and given the general luxuriousness of the rest of the clinic, with its wood panels and subdued lighting, its white robes and bottled water and quietly beeping, efficient equipment, I was honestly expecting something a little classier and more high-tech. Something more akin to a gentlemen’s lounge, with a mini-bar and a broad selection of recent media, suitable for a variety of tastes and predilections, augmented by a humidor or stag’s head mounted on the wall. Maybe even a new, cello-wrapped Fleshlight or some other futuristic masturbatory device I would never otherwise access. What I’m not expecting is this shabby little room, a glorified closet really, with a single pleather club chair lit by a glaring overhead spotlight and four nudie magazines from 2007. There’s a sink and a tiny counter with a mirror above, which I touch with my fingertip to make sure it’s not two-way, and a shallow shelf for the magazines and that’s it. What if I wanted to take my clothes off? Would I just pile them on the floor? Jesus, I don’t want to even think about the floor.

In the weeks leading up to this appointment, I’d been quietly freaking out. I mean, I wasn’t nervous about what they’d find—we’d already had two pregnancies, failed though they were, so I knew my boys could swim—but about the sheer indignity, the intrusiveness of it all. When I’d told Rachael about my apprehensions, she’d laughed to the point of hyperventilation and said, “Try having to give yourself injections daily for a month. Try waking up at 5:30 AM every two days to take two busses and a train to Burnaby to stand in line for 7:00 appointment. Try having half a dozen different doctors stick their hands inside you. Poor baby.” Point taken; I’ve never even had my prostate checked.

In-vitro fertilization is infinitely more taxing on women, with constant blood tests and ultrasounds, needle pokes and cervix exams, artificially raised and lowered hormone levels. If it weren’t for the fact that we’ve been told another natural pregnancy would almost certainly be ectopic and potentially fatal and adoption being so far out of financial reach, we wouldn’t be doing this. I feel horribly guilty that my part in this whole process is so minor; any procedure where the worst thing you have to do is rub one out isn’t really that bad.

On the day of the appointment, my nerves are in no better shape, though. I take transit across town feeling like I’ve been pinned with a scarlet M, like the other passengers know exactly what I’m mentally preparing for. However, perversely, I’m also sort of looking forward to it. After all, I’ve cleaned up my act over the previous weeks – no drinking, no smoking, no fatty or enjoyable foods – and had been told that I wasn’t to have any sexual contact, including with myself, during the five days before. So, by the time I reached I reached the office, I am in serious need of some sort of relief.

However, the container I’m given to jerk off into is large and clear and has alarming volume marks up one side; this does not cool my anxiety. The attendant, a brusque woman in her forties, says, “You’re not expected to fill it.” I laugh nervously at my feet, but when I look up, Nurse Ratchet is deadpan, not even cracking a smile. Before she shuts me into the room, she recites a list of instructions, all don’ts. These include: don’t use any lubricant except that provided, including saliva (an option I wasn’t even considering), don’t forget to wash your hands before and after (obviously), and, for the love of God, don’t miss the container and leave residue on the counter or furniture (what am I, sixteen again?). I examine the container and can already tell that angling correctly is going to be a logistical nightmare. She nudges me in and closes the door behind me.

I grab the stack of mags and settle into the chair, immediately trying not to think about how many other bare asses have sweated in it. But once that seed gets planted, so to speak, I can’t block it and perch on the armrest instead. Three of the magazines are pretty standard—your basic airbrushed softcore fare. But the fourth one is fascinating: a thick volume of state-censored Chinese pornography, featuring middle-aged and older women fornicating with a number of male partners, in which all the dongs have been blacked-out. The end result is surreal and deeply unerotic, at least to me. It must have worked for someone though, as the centerfold seems to be stuck to itself. I return it to the bottom of the pile and pick up a tattered copy of Oui, a magazine that went belly up half a decade earlier, and start to flip through.

While I’m trying to make myself comfortable and get this party started, two things happen. Firstly, I can suddenly hear the stonefaced attendant give the same “don’ts” lecture to a man with a British accent, directly outside my door. I panic for a second and quickly try to get sorted and zip up, before I realize that she’s letting him into a room next to mine, not the one I’m currently occupying. Secondly, after letting the guy into the adjoining room, she stops at the counter a short way down the hall and starts talking with the female lab technician about plans for the upcoming holiday. I can hear every word. For my grandmother, I bought this, like, really nice, pink pantsuit; one hundred percent cotton and it was only, like, twenty-five dollars! and We’re going to my folk’s place for dinner on Saturday and then Boxing Day we’re having brunch at Jonathan’s aunt’s house; she’s super religious, but she makes this really awesome quiche. At first, this is highly distracting. But after a minute or two, it actually becomes kind of arousing; touching myself just a few feet away from these two unseen women, innocently engaged in a mundane conversation. Ooh yeah, tell me more about that quiche, I bet it’s super moist. It’s shameful and sordid and totally does the trick. And I don’t even miss the cup.

As I’m leaving the room, another awkward thing occurs: the Brit next door lets himself out just before me and, not realizing that I’m there, begins to chat with the technician at the counter. I don’t know what to do; I try the door to my room, but it has auto-locked behind me, so I’m standing two feet away from him, a cup of warm DNA in my hand. I look to his container on the counter and decide that my volume level is slightly higher and I feel suddenly vindicated and fight the urge to punch him in a display of macho prowess. Instead, I peer over his shoulder and nod to the lab tech and reach around, sliding my cup across the counter and moving away before the Brit has a chance to turn. A few minutes later, he and his wife get into the elevator along with me and a group of others. The two of them have the sort of coded conversation couples have when discussing sticky subjects in public. He says to her, “I slept really poorly last night but I still feel really good; I don’t know why.” I’m pretty sure I know why, but I keep it to myself.

Once you’ve spent some time waiting in one of these clinics and seen just how many people, both men and women, pass through in an average day, you begin to understand how common fertility problems are. And once you’re comfortable talking about it, others’ stories start to emerge; we soon discover that two other couples we know, close friends of ours, are dealing with similar scenarios. In recounting our war stories, one buddy tells me that he had to provide his sample in the only washroom of a high-volume, non-specialist clinic, necessitating his first purchase of a porno mag in nearly twenty years. The staff, he said, seemed flustered, further escalating his embarrassment, and the only container they had to give him was the narrow type, usually used for urine samples and only effective if your equipment is pointing south. My other friend tells me that, after an unpleasant initial visit, the staff agreed to let his wife in to lend a hand on his second go. When he tells me this, my first thought is What, you’re too good to pleasure yourself? followed quickly by Damn, why the hell didn’t I think of that?

Twenty days after this first visit, I return for a repeat performance, another standing O. I use the other room this time, which has a worse chair but better magazines. As I’m cleaning up, I notice a tiny note affixed to the bottom of the mirror: DVDs available upon request. Goddamnit, I could have had my gentlemen’s lounge, after all. My sperm is whisked away by the technician and left to tango with Rachael’s eggs in a petrie dish somewhere and, a few days later, she is implanted with the fertilized eggs. Today we are a mere month away from the birth of our first child. In the months after that second appointment, I attend all of Rachael’s meetings, taking notes and remembering to ask the questions she forgets. I start the process of making our apartment baby-worthy: painting rooms, moving furniture, making repairs. I am the lifter of all things and the cleaner of all litterboxes. I become the entire emotional support network and occasional whipping boy. I continue to do all the cooking and most of the cleaning, while still carrying a full-time school load and scrambling to get my fiction work published. I become a managerial wizard, overseeing all of the facets of our life, other than actual, physical childbearing. And I begin to realize that my role is actually a bit more extensive than I’d first given myself credit for. I’m providing much more to our family, than just a teaspoon of jizz in a plastic jar.

Christopher Evans is often a student and sometimes a fiction writer. His work has appeared in Joyland, The Canary Press, Riddle Fence, The New Quarterly and more. He lives in Vancouver, BC, with his wife and baby daughter.