The Gun I Used To Own 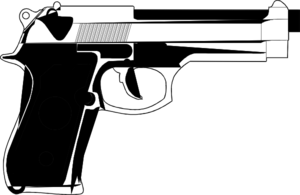 I’m upright in my bed day-dreaming that I could fall asleep when I’m interrupted by the clash of a couple, drunken, presumably, skirmishing beneath my bedroom window— the pair are shouting acrimonious words back-and-forth like a tennis match drenched in gin and hatred. I can’t discern the source of their disagreement, but from the woman’s exchanges I believe her to be the victim and from the sound of her embittered voice I believe her to be pretty. I would confirm her appearance, the color of her hair, her height, her clothing, but I am afraid. Afraid I’ll be seen. It wouldn’t be difficult for the man clamoring below to seek out which unit my head was searching out from—a head soliciting the shape of his woman. He is likely overprotective, and might race up to the third floor and BOOM! burst upon me. And what could I do if he did?

I used to own a gun, but I sold it less than a year ago. A Star 9MM pistol that had a long black beak and a sand-paper grip that, when cradled in the palm of my hand, made me shiver.

The gun used to belong to my father. Holding seven rounds in its chamber, it took me a few clips to adjust to its sharp eruptions. I would fire it at a scant shooting club north of town. Clementines, the range was named after the owner’s mother. After a few visits, I brought with me a poster of Bret Favre and requested the staff to staple it to my target. They did, his yellow helmet substituting for the bulls-eye.

My father would be sore if he knew I pawned the gun. Someday, he told me, you’ll have someone to protect with it. He told me about the time he used it to protect my mother and I. I was too young to remember, but just after midnight one evening a pair of up-to-no-good youths were clanging around in our garage. There is a still a bullet hole above his tool bench. A warning shot, he said. But he’s dead now, and as I age closer and closer towards senility I find the conception of God and Heaven to be more speculative than sensible, so I really shouldn’t stress the woes of my dead father. I told the clerk at the pawn shop that I needed some scratch to pay the electric bill, but that wasn’t why I sold it.

The sincere reason I parted with the gun was that it scared the living hell out of me. I feared that with it I would do something irrevocable. Severe. Permanent.  But I long for it now. If I still had it I could pop my head out the window and yell down towards the damsel, “Everything ok , Ma’m?”

“Not in the slightest!” she yells back. The fella is a large block of expired muscle sporting a flat-bill baseball cap and a white shirt with reflective text that reads: Submit. He raises one of his branches, aiming a finger at me, “Stay out of this, brother.”

I’m down my hallway quick, the gun secured into the waistband of my sweatpants, its metal skeleton shuttering away the shadows of my trepidation. I’m through the door and into the stairwell, taking two and three of the carpeted steps at a time, finally reaching the ground floor.

Only a glass door stands between us now. The man’s back is staring at me. Inviting me to strike. Towards the damsel, I motion my index in front of my lips. She nods with understanding. The fella grips his hands on the woman’s shoulders and shakes her, back and forth and back and forth, her screaming throughout. Her bellow drowns my opening of the door. I’m but a few feet from him when he turns. I yank out the Star from my waistband and smash it towards his skull. He submits, sinking to the pavement, crimson draining an inch from his perfect hairline. I take the damsel’s shaking hand, leading her up the stairs into my apartment. I shelter her in a blanket and warm her a bowl of spaghetti, telling her that she is safe and secure. That I have protected her, with my gun.

But I no longer own a gun or have a father. I no longer have the courage to peer out the window, down to the parking lot, to see whether or not the damsel is indeed pretty.

Paul Thelen is a writer in Minneapolis, Minnesota. He has published with the Atticus Review, Front Porch Commons, Flash Fiction Magazine, Bleacher Report and others. His blog and links to his published work can be found at paulthelenwrites.com.

← Field Test
The Battle of the Sexes →