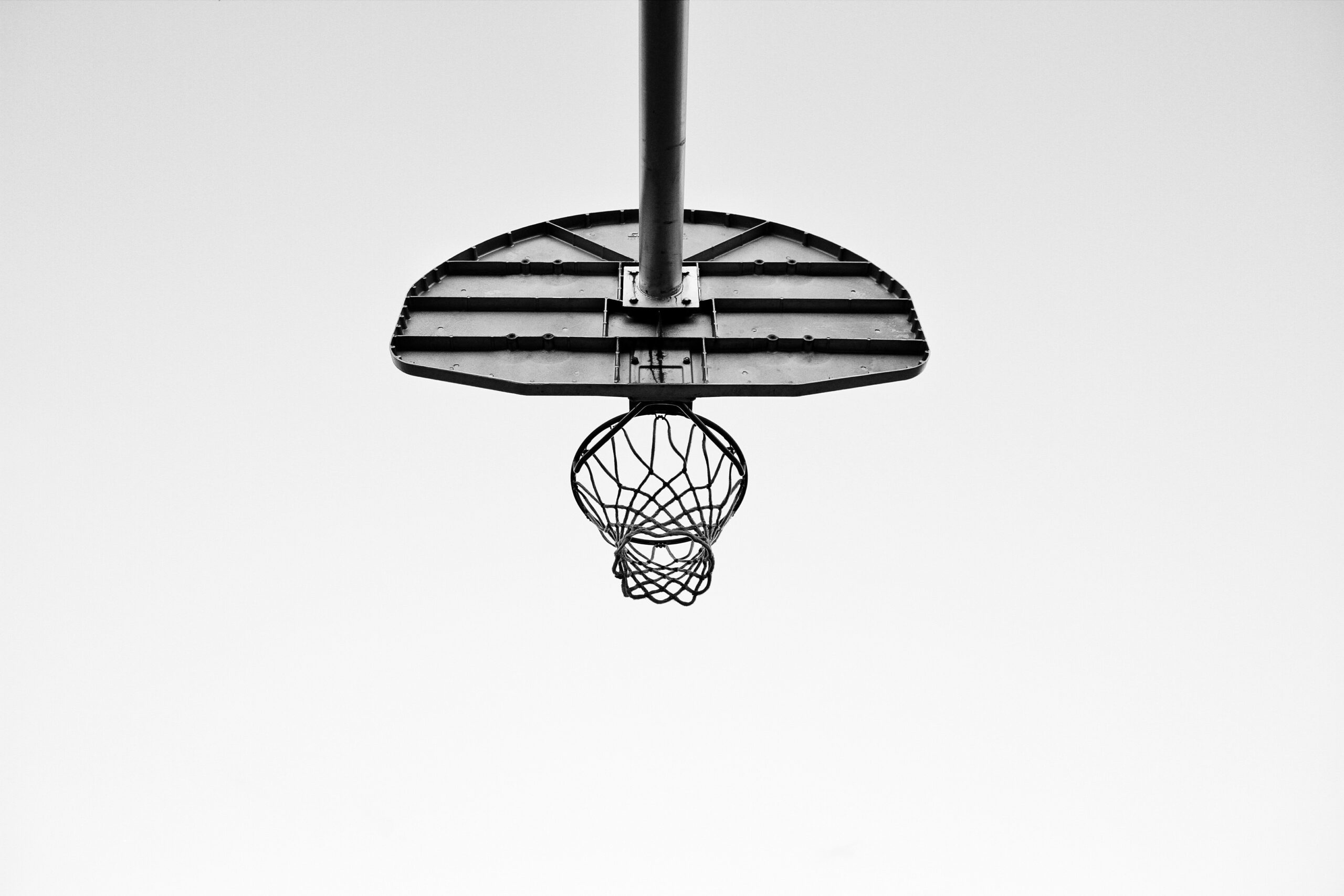 In the voice of this charismatic stranger, basketball is a mystical game you can control before the ball is even in your hands. There’s a way of feeling out the court, of knowing where to stand. He generously shares his knowledge with me, as though, like the sun and the stars, it belongs to everyone.

Part of his teaching is that every court has its own personality. On this one, even the backboard has vulnerabilities—there’s an exact spot to hit in its painted inner rectangle. He moves to the right elbow beside the free throw line and starts making bank shots, one after another. I rebound and pass them back. The ball bangs into that same spot on the backboard every time, like this inanimate object has an Achilles Heel. It isn’t pretty, but it goes in an astounding 25 times in a row.

Some other players come over and we have enough for three on three. I come to think of bank shot guy as the Teacher. Even when I miss, he tells me to keep looking for my shot, and my confidence grows. The Teacher picks me for his team despite my middling skills; he seems to be someone who values loyalty. I apply his lessons from earlier and we develop a wordless chemistry of rhythmic passing, helping us win game after game. The other team has a strong player with an opposing style. He’s constantly growling at his teammates, barking out criticisms. Instead of compensating for their weaknesses, he feasts on them.

After we keep scoring on give-and-go’s to the basket, he explodes with fury.

“Stupid fuckin’ passes,” the man says over and over, almost deranged, an Ahab fuming about white whales.

As soon as he loses, he demands: Next. As in Next Game. He cuts his losing players and recruits others—unlike the Teacher, everyone is disposable to this man. I start thinking of him as the Tyrant. The next game is more competitive. He knows about the backboard’s weak spot too and banks it from the elbow every time. He does it so forcefully, the backboard quivers. The fact that he and the Teacher each know the same secret heightens their contrast in my mind. It almost feels like I’m inside of some type of parable. The court is a romantic setting, a public space in a privatizing world where perfect strangers still collaborate and associate, often without knowing each other’s names. We’ll probably never see each other again, but for an hour or so, we erect our own society.

It’s 18-18 in a game to 21, and someone says the score after every basket. When a Hispanic man and woman pass by the court to get to the playground on the other side of us, we have to briefly pause the game. They’re pulling a shaved ice cart. Cherry. Lemon. Pineapple. All the flavors are displayed on the side. The Tyrant has a big white guy on his team, and he can’t believe they’re walking across our turf.

“What the fuck are you doing?” he barks at them. “Get off the fucking court!”

It’s like the Tyrant’s angry and aggressive energy has rubbed off on the big guy. He doesn’t care that the ice vendors need to get where they’re going. How dare they? Meanwhile, the Teacher is silent. Maybe he just sees this as a random event during a pickup game. A distraction unworthy of intervention. But I wonder, if on this point, the Teacher is wrong. If the court is life in miniature. If what happens here is what’s happening elsewhere. The Teacher says nothing, but maybe it is his kind attitude that influences me.

The big guy stares at the ice vendors. They never engage or respond—they simply keep walking, through the paint, past the 3-point line, until they’re off the pavement. The big guy hums with violence, but luckily there is the game now to distract him. Someone throws him a pass and he is living so deep in his emotion it whizzes by him.

“Our ball,” I say with quiet euphoria.

But he ignores me and I’m too intimidated to test him. He is all rage and muscle. We yield to his anger, allowing the turnover to be negated, and giving them back the ball. They win. I tell myself it’s just a game.

Jason Schwartzman’s first book, NO ONE YOU KNOW, is forthcoming from Outpost19 in May 2021. His writing has appeared in the New York Times, New York Magazine, Narratively, The Rumpus, Hobart, River Teeth, Nowhere Magazine, X-R-A-Y Literary Magazine, Mr. Beller’s Neighborhood, Hippocampus Magazine, and elsewhere. You can find him on Twitter @jdschwartzman.

Photo by MontyLov on Unsplash