I have heard that in this post 9-11 world the most dangerous thing to a nation’s security is a young man from the ages of 20 to 35, unkempt, unmarried, and thereby unanchored to anything that might make him think twice about blowing himself up for a cause. Outwardly, I look the part—I am of those ages; I am unkempt and I certainly don’t look anchored to anything. I also like to go out at night, which means that when I fly somewhere I do so with dark circles under my eyes and a four-day beard on my profile-fitting face.

Needless to say, I’m pretty familiar with airport security procedures. My bags have often been subject to the high-tech Q-Tip that swabs for bomb residue, and I’m definitely no stranger to the good ol’ pat-downs of the past—a light brushing and squeezing of the extremities—nothing disagreeable, maybe even a little bit agreeable.

But over this past holiday season I got a taste of the new TSA measures, the ones causing so much uproar. I’m sure everyone knows the choice travelers are now given: either stand in an X-ray box that purportedly takes X-rated pictures beneath your clothes, or submit to a body search that stops just short of the major cavities.

As fate would have it, on the day of my flight the X-ray machines were broken. Given my track record with airport security, I knew I was destined for a pat-down like none I’ve ever experienced. I took it in stride as I stepped beltless and sock-footed through the metal detectors, and was thereupon diverted to the saddest-looking corner of LAX security, manned by two equally downtrodden officials wearing latex gloves.

“Sir, you have been selected to participate in our enhanced pat-down.”

It was a nice spin on it, I thought: selected to participate. Like I had won something. Or as if Rod Roddy had just invited me to Come on down!

“We will be searching every part of your body. Please spread your legs and hold your arms out at your sides.”

Hearing this, I was at least thankful he wasn’t wielding anything like Bob Barker’s sinister, painfully probe-shaped microphone.

It began as a pat-down pretty much like any other: up and down the arms, in the pit, around the collar and down the chest, up the flanks and back down the back. But these are all areas I’d be hard-pressed to hide anything; I was surprised he didn’t check my belly button—the body’s built-in stash hole.

Then he knelt and things got serious. Down each leg, front and back. As I was left alone up top, I couldn’t help notice other travelers watching my new TSA paramour, a few of them wearing looks of disgust, as if witnessing something illicit going on in this sad corner. My man was now rounding the ankles, where he paused. Like any gentleman, he was saving the sensitive areas for the end. 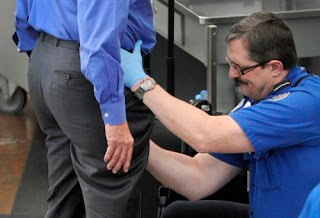 Classically, there are two professions in which a man is granted access to another man’s undercarriage: doctors and tailors. TSA officials now make it a reluctant trifecta. My inspector traveled swiftly up the inseam—a path many tailors have trod—then the upper thigh, then the upper-upper thigh. We were approaching doctor territory, yet before he went any higher, he glanced up to catch my gaze. No, it’s not what you’re thinking. It was a noticeable “I’m sorry” look, a silent apology with the eyes, which is something that I am sure they are forbidden from doing verbally. The look was just enough to distract me from the main moment—an efficient testicle-swipe with one hand, and with the other, a wedge of pressure down my backside. Two seconds and it was over, and when all was said and done, it’s fair to say that the look I noticed was more uncomfortable than the procedure itself.

When someone becomes a doctor, they know in advance they’re going to be performing bodily maintenance on people, and they get paid handsomely for it. Tailors, likewise, know what’s required of their job. And that’s the million-dollar difference that comes with these new TSA procedures: the people who are now obliged to explore your crevasses are the same people getting the same paycheck that they did before all these new procedures were enforced. We didn’t sign up for a fondle, but they didn’t sign up for it either. They aren’t some new batch of depraved feel-up artists; they probably hate this more than we do.

And that’s why when it was all over for me, when I had put on my belt and shoes and was headed to the airport bar for a calming pint, I looked back at my pat-down man in that sad corner, and I felt sympathy. Most likely that man took his TSA job years ago intending to touch forearms and swab bags and wave a metal detector around, all while keeping his distance. Now he’s on his knees grabbing groins so we can all fly safely.

I say give ‘em a break. Like it or not, this is what’s required in the modern age, and we should learn to deal with it, just like the TSA has to. So I got goosed by a stranger. It lasted a moment and at least I was on my way home afterwards with a beer in me to make it all right. As I walked out of the bar and looked back towards security, I knew there stood a man who had a thousand more crotches to grapple with before he was able clock out and do the same. 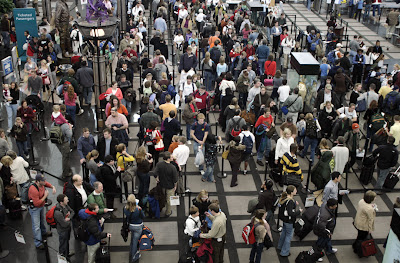 ← The BULL Interview: Adam Schuitema
Will Write for Tobacco →