The Expendables: A Movie with No Balls, or Point 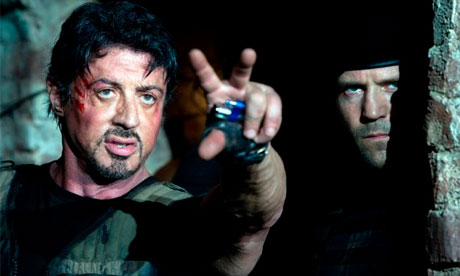 As if a review of Sex and the City 2 was not enough, I’ve been invited back to this publication to rip on another bad movie, The Expendables, and lay on the lambaste across gender lines. And oh, what a bad movie The Expendables is. If you really want to see this bad movie, (which there is no shame in wanting; I, for one, saw it) do not read this. I will spoil this bad movie for you. Just a warning.

But first, a primer: Dirty Harry, we’ll remember, is a movie about a rogue cop who breaks the rules to save the life of a little girl. It’s a brutalistic movie, a movie that says “fuck the rights of criminals and fuck those liberals who gave criminals rights in the first place.” It was a conservative response to the sixties. And although I don’t agree with the theme of that movie, at least the movie had some balls.

The Expendables, in this sense, has no balls. There isn’t a single ball in the movie. I’m sure all the actors have functioning scrotums, (except Schwarzenegger, that ex-steroid-using, political waffler) but I’m speaking of metaphorical balls, the balls that allow artists and movie-makers to take risks. The only risk this movie seemed to take was to take no risk.  Wrap your head around that.

The movie starts on a ship overrun by modern-day pirates. Unsurprisingly, Stallone and his buddies stop the pirates, but one of these buddies, Dolph Lundgren, wants to hang a pirate who has already surrendered. Sly and the others are like, “Hey! We don’t hang pirates! We just shoot them a lot until they give up.” But Dolph shows no remorse, instead he threatens Jet Li, the tiniest of all the Expendables, with a knife. And by the way, it turns out Lundgren is only acting like this because he’s high on some drug. They don’t say what drug; they just let us know it is a drug, a bad drug—the drug that Nancy Reagan hates the most. The Expendables seem to have nothing by way of a workplace counseling program, so Lundgren is fired and, naturally, becomes a bad guy.

Meanwhile, Bruce Willis calls a meeting of the meatheads, and with Stallone and Schwarzenegger, assembles the most uncomfortable Planet Hollywood shareholder’s meeting ever. After Arnold and Sly bicker a bit, Willis says, “Hey, are you guys going to suck each other’s dick now?” Then there is an interesting pause. Sly and Arnold look at each other, and Sly raises his palm as if to say, “What do you think about that proposition, Arnold?” Then Willis does an awkward laugh and the movie continues. I don’t understand what that scene was about, but I have four theories: 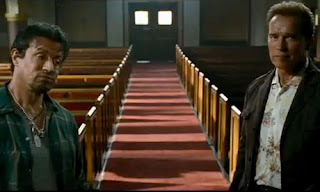 But I digress: Bruce Willis eventually offers Stallone and Arnie mercenary work killing a dictator on some island. (San Lorenzo, perhaps?) Stallone takes the job, because, apparently, Arnold is too busy illegally running for president.

Time for subplot: while Stallone is out talking dicks with his business partners, Statham goes to his girlfriend’s house and finds out that she has a new beau, who I’m pretty sure is the guy whose picture is on the Hanes’ crew neck three-pack.

So no one gets their blow job, and Statham and Stallone fly to the island and meet a beautiful woman. This woman shows them the castle where the bad guy lives. Yes, the movie is like a video game. And like a video game, Stallone and Statham kill a bunch of no-name peons in a matter of seconds.  Also like a video game, this bad guy is not the ultimate bad guy; there’s a worse guy pulling the strings—an over-tanned ex-CIA corporatist end boss.  The Expendables advance to the next level, but they have to leave the beautiful woman behind. 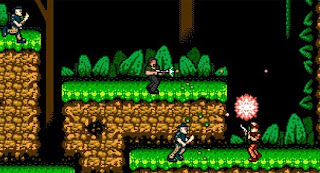 This point brings one of the best scenes of the movie. Statham, worried that his seaplane might get shot at, takes off unnecessarily early. Here is Stallone’s gratuitous “leaping on a plane at the last moment for no reason” scene.  It made me laugh, and that is something.
Statham and Stallone are so pissed off about being shot at, instead of flying away to safety, they turn the plane around and kill every single person on the docks with their airplane guns. Luckily, Tanny McBadGuy and Steve Austin leap off the dock into bullet-and-explosion-proof water.

Somewhere around here they also squeeze in that guy from The Wrestler.  Rourke.  The Wrestler was a pretty good movie.  You should maybe rent that movie instead of seeing this one.

Oh, and Statham goes to see the lady that dumped him. She has a black eye now. The Hanes’ man beat her up. This gives Statham moral provocation to punch his rival.  And with few dozen of those punches, romance is rekindled.

And Dolph Lundgren! He comes back to avenge his wounded pride. There is a car chase that ends in a factory, where Li and Lundgren have a little fight. Stallone sits out, dazed from a serious car crash. Only a serious car crash can daze Stallone. Lundgren is just about to impale Li when Stallone presses a button in his mangled car. This button activates a gun-dispenser. Stallone shoots Lundgren, and we all think Lundgren dies.

(Brief aside: In my old Pontiac, I had a built-in gun dispenser, but whenever it was too hot, my gun-dispenser would stick. And fuck, every time I got in a fender bender, the gun dispenser would automatically dispense my gun, even if I didn’t want it to. Frankly it doesn’t seem realistic that a.) the gun dispenser would still work after a serious car crash or b.) guns were not dispensed on impact. Of course, I hear GM is planning some big strides in weaponry-dispensing features. The bazooka-mounting package on the new Suburban, for example, will really make Chevy the leader in blowing shit up on the interstate.)

Back to the movie: They fly back to the island, I guess, kill a bunch of people, and save that woman. One guy with a cauliflower ear sets “Stone Cold” Steve Austin on fire then punches his burning face. Tanny McBadGuy is shot and stabbed and the woman is saved. Yo. 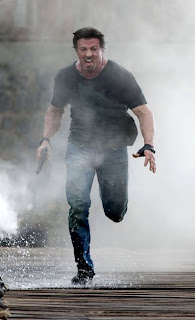 At the very end of the movie, though, the whole gang is sitting around the bike shop throwing knives. And guess who’s alive! Dolph Lundgren! All his drug-addled sins have been forgiven. Believe it or not, there is a metaphor here.  Dolph Lundgren was a symbol for the heart of the Expendables, but the Expendables lost their way, just like Dolph. By saving that woman, the Expendables earned their Dolph-like hearts back. Except, what did the Expendables ever do that was so wrong?

Let’s look back: in scene one, they killed pirates. Remember those pirates that Barack Obama had snipered off the coast of Africa? Remember how everyone and their momma said what a good idea that was?  Sure, killing a pirate who’s surrendered may be wrong, but that’s not what the Expendables did. That’s just what Old High-Times Lundgren wanted to do. And leaving that woman behind wasn’t really a sin; she was the general’s daughter after all (did I mention that?) so there was no reason to think she’d be waterboarded.  Statham can’t even fight a guy he hates until he’s given the moral green-light. So when did these guys lose their hearts? Every unique action in this movie was aboveboard from a contemporary morality standpoint.  If you are going to write a redemption story, you need to have something to be redeemed for.  But the movie didn’t have the balls to sully any of their Expendables with sin.

Also, no one dies.  No one here is really expendable.  Even the guy that dies really doesn’t die.  They’ll all be back for the rip-roaring sequel. Way to play it safe!

I’ll end this article with a few technical thoughts on Stallone’s directing ability. Stallone likes to use the “shit-in-the-way” method of directing, in which a scene unfolds behind the waving branches of a bush or next to billowing curtains, and you can expect to watch every fight scene from behind a chain-link fence.  For dramatic scenes, Stallone likes to use the “what-the-fuck-am-I-looking-at-close-up” method, zooming in real close on 70% of a person’s head. For example, during The Wrestler’s dramatic speech, the only thing on the screen is his face, but we’re so close to the face that we can’t see all the face, just most of the face.  Or it may be my local Cineplex is cutting corners, figuratively and literally.  But in any case, hooray for Stallone for making the movie scream, “I am being directed!”

(And just to prove I am not a coward, if any Expendables have a problem with this, I’ll account for these views personally anytime during office hours at the University of Arkansas’ English Department. I’ll be waiting, with a very light dumbbell in one hand and some Alice Munro in the other, muthafuckas.)

← Sex and the City 2: Redefining Failed Pornography
Don Draper and the Perils of the 21st Century →