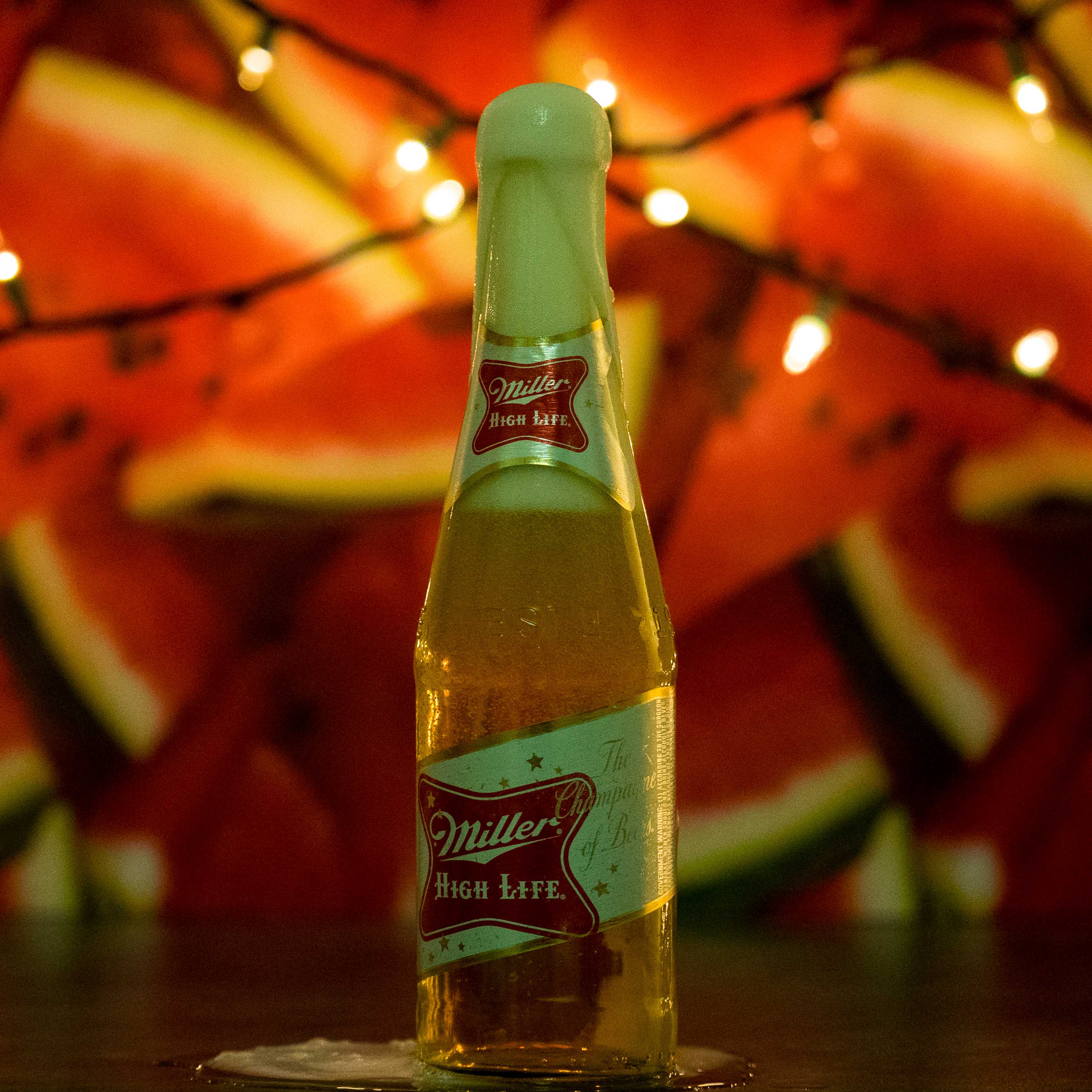 In a rental cabin in the mountains, friends and I unload supplies for a New Years gathering. We have enough steak and bacon flats to build a high protein fort. A bag of limes offers a slight chance of vitamins to go with forecast rain showers. And several dozen boxes of various beer brands hint at the cabin-bound weekend to come.

Yes, we have fancy grapefruit IPAs, English brown ales, and old standby Sierra Nevada Pale Ale. But those are balanced by mainstream offerings, including American light beers and cheap choices. Slipping off the grocery bag like a plastic cloak, I reveal the shiny gold and white box of Miller High Life: The Champagne of Beers. An appropriate choice, given that we forgot to bring actual champagne.

In 1855, German immigrant Friedrich Müller purchased a small brewery in Milwaukee and founded the Miller Brewing Company. Anglicizing his family name as Miller, the founder died in 1883. But the company remained with the family until 1966 when it was bought by W.R. Grace & Co., which sold it three years later to Phillip Morris, which sold it in 2012 to South African Breweries, which was bought in 2016 by AB-InBev, which will avoid antitrust concerns by divesting from their 50% stake in Miller Brewing by selling to Molson-Coors. Phew.

Miller Brewing released their longest running brand High Life two days before New Years on December 30th, 1903. So, not to nitpick, but really, it’s been more like 113, not 114, years. Back then, most beer was sold on draft in taverns. High Life was a rarity, coming in a clear slender bottle. And its gradually tapering neck, like all classy things, was wrapped in gold foil. For these reasons, in 1906, the brewery adopted the nickname, The Champagne of Bottle Beer. Curiously, the phrase remained mostly unchanged until 1966, a full 12 years after that exact wording was printed on cans. Finally, in 1966, someone realized it might make sense to pull the word “bottle” off of the can. The simplified nickname, ever since, has been The Champagne of Beers.

The release of High Life was soon followed by the appearance of the now-famous Miller High Life Girl. According to the Miller-Coors Blog, originally she was dressed as a ringmaster atop a wooden beer crate, complete with whip and tall hat. Then, in 1907, Miller advertising manager A.C. Paul was lost in the northwoods of Wisconsin when he had a vision of the Miller Girl sitting inside a crescent moon, among other changes. While that region of Wisconsin is not known for the production of hallucinogenics, the end results suggest the possibility. The colorful dress was retained and the tall hat became some sort of sombrero. The whip was tucked under one arm so her hands could double-fist a beer bottle and fancy glass. Still, it took almost 40 years before the poor carnie-turned-corporate-spokeswoman had the courage to turn her head and look directly at the viewer.

Despite High Life’s curmudgeonly age, the brand is actively engaged with 21st century social media. The @millerhighlife Twitter feed features a continuous stream of revealing messages about “living the High Life” that are publicly available and “intended for those 21+ only.” For example, from November 2016: “Every batch…must pass 250 quality tests before leaving the brewery.” And, as everyone knows, nothing says party like 250 ambiguous diagnostics. Other recent gems include: “Don’t overthink a High Life pairing…” and “Miller supported local farmers in mid-1900s by renting advertising space on silos and barns.” Certainly a charitable act, which in later years, evolved into Miller supporting local billboard owners.

In 2002, at the World Beer Cup, Miller Brewing made a bold showing with 6 total awards in 5 out of 76 categories. Of note, High Life took gold in Category 27: American Style Lager from among 18 total entries, including silver medalist Canadian by Molson Brewing of Etobicoke, Canada. But official awards seem academic when compared to more personal endorsements. One vote of confidence was offered in 2015 by a 110-year-old woman in New Jersey who credited High Life as one of two reasons for her longevity. When asked about her secret, Agnes Fenton, of Englewood New Jersey, revealed she drank three High Lifes everyday, plus plenty of Johnny Walker Blue Label, just like her doctor suggested 70 years before. In interviews, Ms. Fenton gave no indication if her doctor had discovered this medical miracle in the northwoods of Michigan.

In the kitchen of our rental cabin—with some odd melon-themed wallpaper bordering the counters—I snag a High Life as the hour approaches. Known for lively carbonation, I’m curious if I can make a bottle bubble over when the moment arrives. Upon opening, the cap lets out a typical hiss, which falls far short of a champagne-like explosion.

A basic American adjunct lager, High Life is made with a yeast strain brought from Germany plus Galena hops, and a blend of barley malt and corn adjuncts. Taking a sip, the primary characteristic is bubbles, followed by a sweet but mild hint of grain and little indication of hops. Its flavor reminds me of most New Years Resolutions—fairly weak, short-lasting, cheap to implement (what with 12-packs often available in the $7-9 range), and something folks might try once a year without remembering why they gave it up the last time.

One welcome absence is the lack of associated skunk flavors, which typically occur in clear bottles offering no UV protection. In this case, the answer is Miller’s use of special-engineered light-resistant hop-derivatives. Truly, one is living the high life when consuming a throw-back beverage infused with modern chemicals.

But for me, as midnight draws near, my grand substitution experiment is a failure. My High Life bubbles on well within the confines of the bottle. Yes, I could shake one up and spray it around the room, but that would feel like a Pyrrhic victory. Fortunately, a lifelong buddy spots my disappointed look and descends with a plan for remedy.

In one swoop he smacks the bottom of his own bottle onto the top of mine. Hark! Frothy beer foams forth. The clock strikes. Friends whoop and holler and hug and toast. The time for celebration has arrived!

Another friend watches the straw-pale lager flow onto the floor and announces his own resolution. Next year, he won’t be volunteering his credit card for the security deposit.