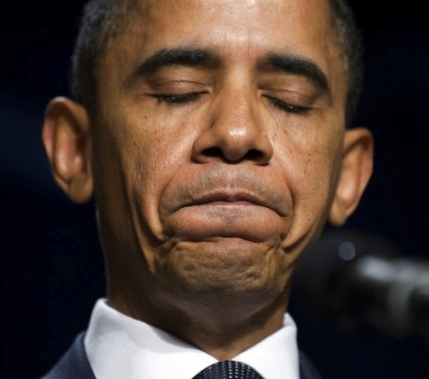 In an election year it’s normal for a certain fatigue or malaise to creep in around the month of June. As the temperatures climb and the days grow longer, normal everyday citizens just want to be left the hell alone. There are lawns to mow, vacations to take, burgers to grill, and the last thing anyone really wants to tackle is how goddamn bad we’ve mucked this here country up.

You can see it by watching the cable news channels. At this point in the cycle they’re drudging up the worst of guests, stalwarts of a time passed where Karl Rove and Dick Morris were still seen as People Needing To Be Listened To. Last week the Fox News Channel marched War Criminal Oliver North out and asked his opinion on the upcoming contest between Barack Hussein Obama and Willard Mitt Romney and I nearly fell into the floor when his answer didn’t involve a military coup and the complete and utter dissolution of everything good and right about our Constitution.

Between these boobs and the manufactured controversies—Does Obama really believe the economy’s in good shape? Is Mitt building a million-dollar home with elevators for his fleet of cars?—comes the newest, and expected, phase of the campaign. We are entering what people call The Dark Times, the point at which each candidate is given his expected thumping and doubt is raised as to whether the race itself will even be close.

Take for example the current rising narrative that Obama is losing steam and, perhaps, will be marched out of office like a diseased dog. Even liberal columnist Maureen Dowd has gone into the business of questioning his achievements and electability. In her recent New York Times piece she lamented that Obama, in whom she’d seen a Superman-like figure, was in reality a barely effective, compromising politician incapable of changing much more than his clothes. The result was a full week’s worth of slobbering from the beltway politicos who love to see in-fighting more than anything other than a good and filthy sex scandal.

The evening shows all had the same questions: Is this the end for Obama? Has he lost his base? Will Willard Mitt Romney take his rightful place as CEO of the United States of Corporate America?

The answer, resoundingly, was most likely.

For someone new to the cycle it might seem as if the race could wallow into a landslide. The truth, however, is that these things have a tried and true narrative. Obama will sink for the next few weeks. There’ll be hours of handwringing among liberals who’ll sit down and speak of doom and humiliation. There’ll be headlines above pictures of Romney, sleeves rolled up, shaking hands, kissing trust-fund babies, the text screaming MAN OF DESTINY, or CAN ANYONE STOP MITT?

Don’t buy it. In August the Republicans will hold their national convention in Tampa and the scrutiny will close in like a net in the days after. The Internet will flare up with accusations over how much his suit cost, or how many jackboot thugs it took to beat the living hell out of Occupy protesters who will, no doubt, be lying bloody in the streets among the retirees and the dying. It will be His Turn, his right of passage as he marches toward November.

Politics, after all, is a game in which few remember the past. We bring it up in factoids, remembrances of fanciful and ridiculous things like Ross H. Perot and the entire George W. Bush Administration, but we rarely piece together the whole of this puzzle. There is an ebb and a flow to these things, a way that they are conducted. Remember, if you can, Bill Clinton and his index of improprieties. Remember how many times Bubba was written off early in the cycle, mostly in the primaries and early stages of his national campaign, and remember, more importantly, how those inaugural obstacles quickly faded toward momentum.

We are a fickle and forgetful people too busy with lawns and trips to Panama City and barbecues. We are more interested in the tomorrow than we are the yesterday. Soon Willard Mitt Romney will have his time under the microscope. Soon we’ll be inundated with the words Bain and Capital, Off-shore and Accounts,  and Out Of Touch. We are entering the Dark Times most assuredly—it’s simply a matter of where the wave breaks, and whom it swallows.

← BULLshot: GC Perry
The Heart is a Strong Instrument →