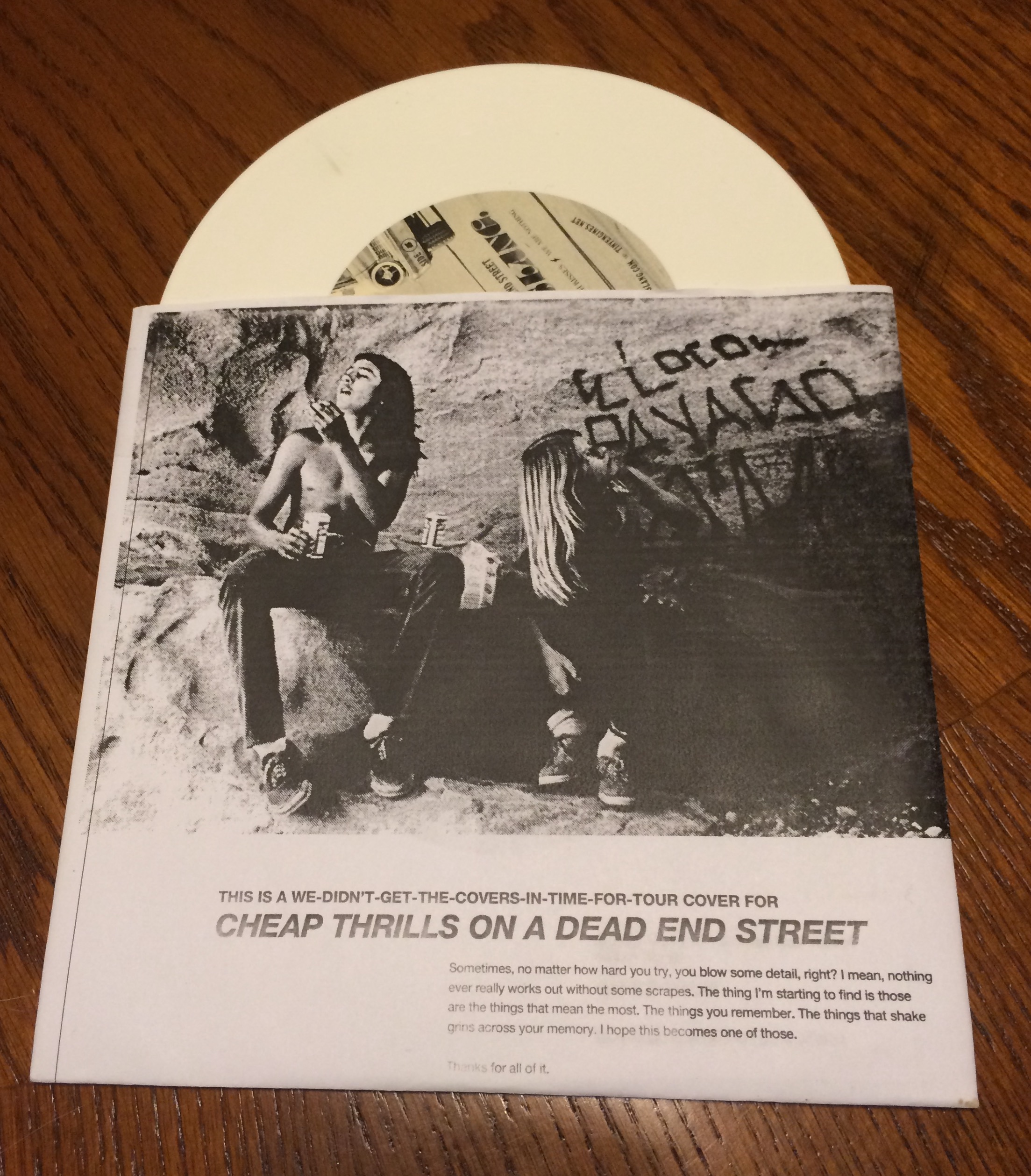 The Rumba Cafe is only slightly larger than my two bedroom apartment and smells like summer in Ohio. It’s a few blocks from Ohio State in Old North Columbus, but far enough to not really feel like a campus neighborhood. Only the wing shop down the street and the stray buckeye flag hanging from the front porch betrays its location.

My first instinct at a concert is proceed directly to the merch table. My life can easily be measured in silk screened t-shirts and one inch buttons. There is no better definition of “shop indie” than buying directly from the band. In some cases, it’s the difference between having money for food AND gas. On an appropriated cafe table there was a “special” tour edition of their latest 7”, Cheap Thrills on a Dead End Street. I introduced myself to the guitarist Ruben working the table, and talked writing. Even though I already had a copy, I picked up another—last-minute printing SNAFU meant the band had to go DIY improv with Xerox hand-folded covers with a little message:

Sometimes, no matter how hard you try, you blow some detail, right? I mean, nothing ever really works out without some scrapes. The thing I’m starting to find is those are the things that mean the most. The things you remember. The things that shake grins across your memory. I hope this becomes one of those.

Thanks for all of it.

It was the last song on this EP which kept me up at night. After spending weeks in record stores from St. Louis to Indianapolis, I had finally caved and ordered it directly from Tiny Engines distro and it rarely left my turntable. Leave it to the survivors to remind you what you fight to keep. There is so much surging intensity in the garage guitar, an acoustic strummed with defiance, a rave-up clarion call to a generation losing its way in dawning middle-age. The mantra “We are nothing like them,” as clear and direct as the noonday sun in a cloudless sky. James Alex’s voice the echo of your hope, buried beneath the rubble of expectation and adult disappointments. His chords peel away years of cynicism, and his lyrics reveal the true casualties of life—the people around you who have burrowed their roots deep into the soil, not to grow, but to leech the land dry. In eleven minutes of music, Beach Slang clears away years of debris and detritus to expose your scars, reminding you that these wounds are no longer fresh, but instead are marks of wisdom by which we find our way back to who we were meant to be. Cheap Thrills On a Dead End Street was my four song soundtrack for nearly the entirety of my six hour drive to Columbus, Ohio to catch a band which spoke to me in ways no band has since the days of discovering Big Star and The Replacements in high school.

Knowing that you are on the edge of your forties and all you have to show for it is an extensive collection of books and records is sobering. Bouncing from couch to couch and state to state over the last handful of years, there’s a restlessness settling into something more desperate. I have nightmares about mortgages I’ll never have, but what’s always pulled me through has been the satisfaction of living by my own rules. I think about all the writers I’ve shared classrooms, pages, and stages with, from college to open mics to grad school, and I know that so many—too many have gone on to make a hobby out of a career and a career out of compromise. Or, at least, there’s a part of me that wants to label their aspiration as compromise, because anything else exposes too much about my own false starts and failures.

In the age of digital sprawl, where our most recent iteration of physical music media invited bands to fill its contents with eighty minutes, the compact disc nearly ruined the concept of an album. The epitome of quantity over quality, the metaphor for the Big 80’s, the insistence of more, the longest of long players. Even with iPhones and Spotify and cloud storage and Sirius XM and the endless stream of possibilities, the four songs and eleven minutes burn through Midwestern interstate hours like an old friend you’ve just met for the first time.

I was introduced to James Alex for the first time when I was in college, selling 7”s and CDs for my friend’s band in some American Legion in Allentown. It wasn’t Beach Slang, then, James was in a band called Weston and they were power pop and harmonies, singing a song he wrote “before he hit puberty,” (as he would say years and reunions later). There were a few albums, a major label, some national tours, and like faces in a hallway, everyone gets consumed by the swirling masses of self-directed lives. But then I ran into James at a Frank Black show, and again at a mutual friend’s cookout. And then, hallway faces diverge into their own lanes. Sitting in the second floor office of a school building, and soon to be out of a job, I heard new songs with a familiar voice.

James Alex was always meant to be the hard luck kid he writes about: The Bastard of Young, a Replacements acolyte. In other hands, lyrics like “I write a lot/It’s mostly lies/I fall in love to pass the time” could come off as sophomoric, but there is an earnest quality to the music and an urgency to James’ voice that makes it honest. Perhaps it’s the self-incrimination that invites us into the plainspoken appeal here in “Dirty Cigarettes.” The lyrics come from a place of introspection, and a world where failing and fucking up are hard-won lessons.

When it was just me, it was easy to write off the loser-chic writer vibe as undeterred spirit. But when you add love and significant others to the mix, and learning how to share a life, those fears get amplified. It’s like slide a pair of humbucker pickups into a pawn shop acoustic guitar and running the whole mess through a Mesa Boogie amplifier. All the noise and cheap notes from six strings barely staying in tune get louder, hum, and distort. The buzz remains after hands leave frets, but does it sustain?

Here’s the real big truth: for all the love I have for the beautiful loser—the Westerbergs and Chiltons and a record store of near misses, at some point, I want to be on the winning side. But what is winning anyway? Publication? Notoriety? 100K+ Twitter followers? I know what it isn’t—worrying about rent, borrowing money from future in-laws, the clawing sense of regret marking time in your guts. But maybe it’s about knowing someone can win–that even if you don’t see the light of day walking through this labyrinthine network of tunnels, you can hear the echo of a familiar voice, somewhere ahead of you. Maybe it’s trusting the faith of those around me to put it all together, for chips to fall our way.

Look past the youthful flourish of punk passion twirling a white Epiphone awash stage lights, and you’ll see a roadmap of laugh lines and crow’s feet. The map and mop of hair screaming back at us is full of false stops and detours. The narrative is in media res, but already feels like redemption reaching out to us in the dark. In the gallop and propulsion of battery-mates JP Flexner and Ed McNulty, there’s an insistent resolve to push the hook of “American Girls and French Kisses” from chorus to anthem. Ruben is the anchor for the band’s stage energy, letting notes ring and create their own gravity in the din. Somewhere here you can insert Fitzgerald’s line about second acts and American lives, but here is proof that it’s bullshit. From the foot of the modest riser at the Rumba Cafe, I lose my voice. A hoarse affirmation that persistence and faith in your voice will find its way through the ether and nihilism of deaf ears and compromised futures. That you are in the right place and time in your life for this right music to find you.

Sitting on my musty comforter at the Super 8 near I-70, I kept running my finger along the edge of the alpine white record. My ears ringing from standing in front of a Marshall half stack.  There is a contradiction of noise and notebooks scattered inside these tobacco stained walls.  Even as I’m finishing this sentence—a year later from an apartment outside of Knoxville—what finally dawns on me is what loss actually looks like. It’s the absence of hope.  Beach Slang’s strength is predicated on hope. The delivery of its promise is on the listener. We complete the circuit. James Alex and company aren’t about catharsis, they are about reveling in the beauty of seeing another day. It’s not about the permanence of winning or losing, it’s the discovery of being this alive and surrounding yourself with voices in ragged harmony to our shared chorus: “We are nothing like them.”

The right music finds you. The poetry of your spine is etched with grooves which only bears its resonance when a stylus makes contact, runs its diamond tip truth along your column of bones and nerves, and conducts electricity. Goose skin flesh. Static touch. The anticipation which only comes from the first thunderstorm of the season. If you’re patient, or if you’re ready, the right music finds you, scrambles your sense of balance, and makes the heart a tesla coil.

← Scoot When You See the Boom-Boom Boots
BULL ON TAP: BUDWEISER (AKA “AMERICA”) →