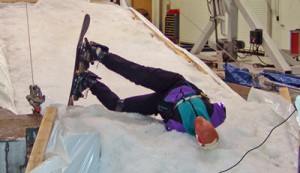 Snowboarders—people who ride boards on snow—are common sufferers of an ailment known as a lateral talus fracture, sometimes called snowboarder’s ankle. This fracture is caused by jumping the snowboard and then landing on an uneven surface, such as a mountainside or a waffle.

The problem, according to orthopedic surgeons, is that the fractures are small, serious and hard to detect. When detected, the foot usually needs to be realigned using screws or plates. Sometimes small bits of bone can fall into to the fracture and surgery is required.

In order to prevent such injuries, snowboarders are urged to use only proper equipment and to practice often. “It is most important to practice not fracturing your ankle,” said a rail-thin man with a beard. He chewed gum loudly. “I’m practicing right now. Notice that my ankle isn’t fracturing as we speak. That takes skill.”

Other common snowboarder ailments include: