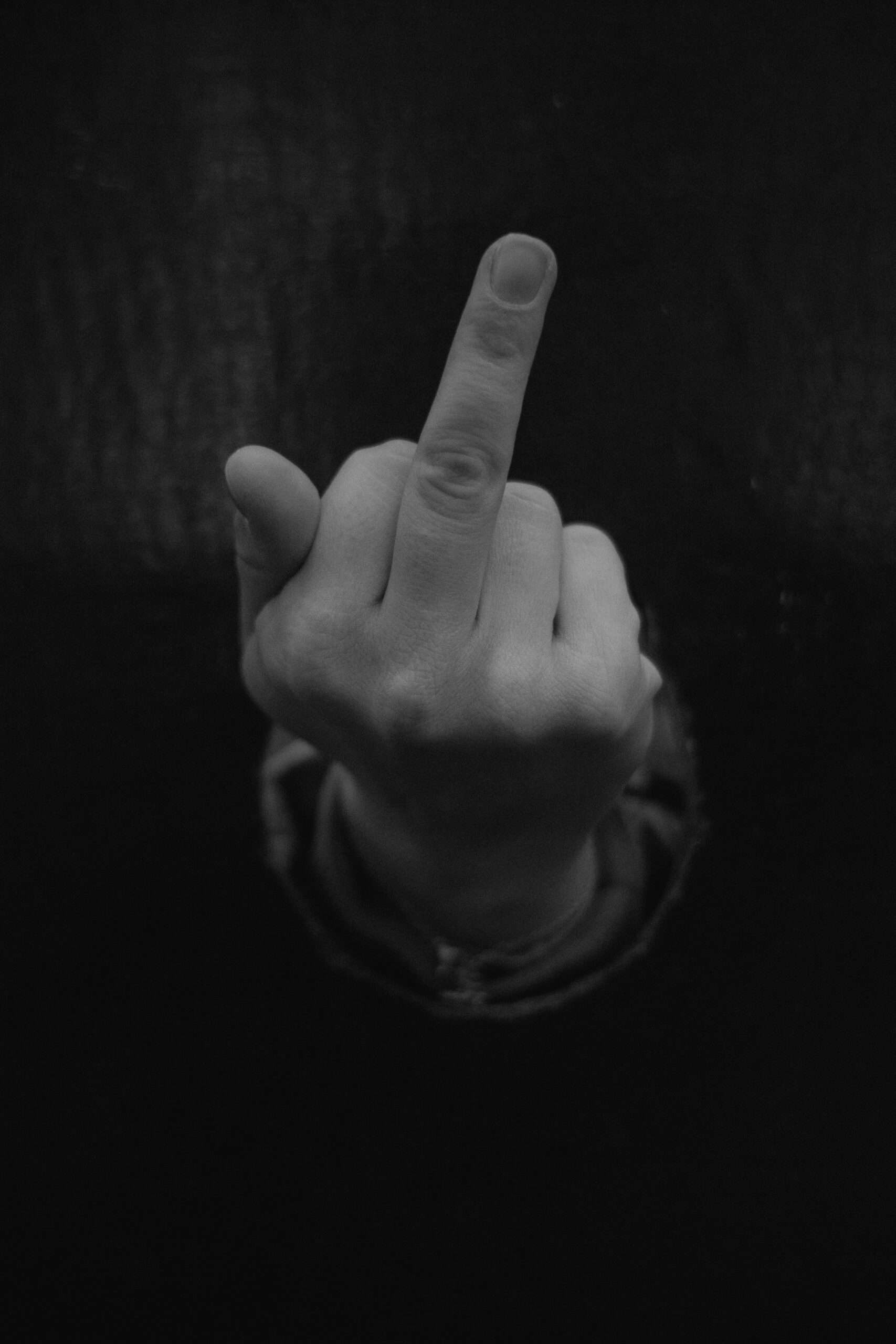 When he started demonstrating his sleeper hold on us (squeezing our necks until we lost consciousness), we decided it was best to avoid him. This didn’t go over well. One day, as we were walking past his house on the way home from school, he grabbed my brother and threw him in a muddy ditch. He was standing there laughing when my lunchbox—a metal Scooby-Doo job—smacked him square in the face.

I couldn’t believe I hit him—it was a twenty-foot throw. He put his hand over his eyebrow and stared at me in shock. Then the blood started flowing. It gushed between his fingers and dripped onto his shirt and jeans and sneakers. He let out a gasp and ran inside.

We stood there horrified. None of us had ever seen that much blood. One of the neighbor kids said, “Is he going to die?” The guy’s older brother came out, glaring at us with disgust. He threw the lunchbox back, and I asked him if his brother was okay. “No,” he said. “We have to take him to the emergency room.”

A couple days later, I went over to the guy’s house with all the money I could scrounge up. I felt awful and wanted to help pay the medical bill. His mother let me in, smiling. “Boys will be boys,” she said. I gave him my sack of loose change and apologized. He showed me his stitches and joked about having a cool scar. It was all an act, of course, put on for his mother, but I didn’t know it yet.

The next time we met, he didn’t say a word. Just walked up and clocked me in the jaw. “I owed you that,” he said. My mind went blank and I felt woozy. Was this what they meant by “seeing stars”? I walked home as steadily as I could. The walking part was important because I didn’t want to look like I was running away. When I got to the garage, I went inside and leaned on the tool bench for support. I’d like to say I didn’t cry, but I probably did.

My second fight I was riding my tricked-out BMX bike in front of my grandma’s house. This bike was rad: custom handlebars, mag wheels, stunt pegs. I was popping wheelies and hanging five and felt pretty cool until this big kid came up the road and said, “Shitty bike, dude.”

For a twelve-year-old (male), that’s all it takes. I charged him. He grabbed my shirt and held me at arm’s length while I flailed like a windmill. When I finally got loose, I landed a glancing blow on his ear. He pushed me away and ran over to my grandma’s door.

“Your grandson is trying to start a fight with me,” he said, “and I’m not allowed to fight. They’ll send me back to juvie.” I told him that’s where he belonged, and even used the term “dirtbag” in front of Grandma, who was a big churchgoer. She found this all very distressing, and observed me closely for months afterward, watching for signs of incipient delinquency.

It was 10 p.m. in the suburbs. I was behind the wheel of my Buick Century, sitting in front of a minimart. Three friends were inside buying Swisher Sweets and Funyuns. A fourth was in the back seat, vegetating. My friends exited the store arguing with a bunch of black guys. Threats flew back and forth. One of the guys came over to me and shouted something profane. Then he kicked my fender and hopped into a car with his buddies.

I had no idea what was going on. My friends weren’t Nazis, skinheads or KKK sympathizers. They were liberal arts majors. They piled into the Buick and told me the story. Apparently, the guy who’d kicked my fender had said something lewd to the female member of our group. This didn’t strike me as particularly egregious—I’d said lewd things to her myself. I was about to leave, when the offender revved his engine and said, “Let’s go, bitch!” He peeled out, and like a true teenage moron, I went after him.

Now we were on the four-lane blacktop, racing at ridiculous speeds. It was a ‘50s B-movie, without the rockabilly soundtrack. After a few miles, he pulled off the road into a vacant lot. The vegetable in my back seat said, “Don’t follow them in there.”

When I drove up, the lewd transgressor got out of his car and banged on my window. He said, “Wanna go, bitch?” I rolled the window down, and he punched me in the face. This was nothing like the sucker punch I’d received back in grade school. I didn’t see stars; I got mad and kicked the door open. The guy went sprawling. I jumped on top of him, held him down, and punched him until his nose bled. Before I could take off, a phantom uppercut knocked me on my back. I looked up to find a dozen guys circling me and more pouring out of the house next to the lot.

It was time to turtle. I rolled onto my stomach and covered my head with my arms as the stomps and blows rained down. They pummeled every exposed part of my body. One dude even worked my legs. What kind of weirdo punches someone in the legs? The beating continued until headlights flashed across the parking lot. My assailants must’ve thought it was the cops, because they bolted. I got up and gimped back to the car. One of my friends had been brawling, too. He took a final pop to the mouth as he climbed into the front seat.

The vehicles lighting the lot turned out to be gawkers. I cut out pretty fast, thinking the cops wouldn’t be far behind. As we flew down the road, the vegetable said, “I told you not to follow them in there.”  I put him out at the next corner and drove to a party, where a number of concerned girls fussed over my injuries. So I guess the end result wasn’t too bad.

I’d gone to a Penn State fraternity party with this obnoxious goof who insisted on walking around with a joint behind his ear. When the frat brothers noticed this, they took us outside for a lecture.

“You can’t have that on display in our house,” said the head bro. “It’s not that we’re against drugs. I like to get high as much as the next guy. But not out in the open, you know?”

The goof said yeah he understood no problem and wow what a cool house you have.

“You like it?” said bro. “Rush week is coming up, and we can always use a guy with connections.”

I’d been ready to leave for five minutes, and now the goof was going to make me listen to this smarmy douche’s recruitment speech. My impatience must’ve shown, because one of the frat henchmen looked at me and said, “What’s your problem?” I told him I was really, really bored. “Take off your sunglasses,” he said. I was wearing a pair of those skinny cyclops sunglasses, which would’ve been uber cool at a Devo concert circa ‘83, but were obviously not the thing in the late ‘90s.

I ignored him and he repeated his command: “Take off the sunglasses. Now.”

This seemed like an excellent time to excuse myself. I expected the goof to follow me, but he just stood there fawning over Captain Toga, his new hero. As I departed, the henchman laughed. I flipped him off, thinking I was far enough down the road to get away with it. I wasn’t. He sprinted over and knocked me down. He was a big dude, with copious muscles and no shortage of irrational rage.

I assumed a lounging position beside a dumpster and said, “You really need to lay off the ‘roids, man.”

By now the entire goon squad had gathered around us, and none of them were smiling. The henchman grabbed my arm and jerked me up on my feet.

“Whoa,” said the head bro, separating us. “If you’re going to fight, let’s move over here where there’s more room.”

He gave me a surprised look and adjusted his Nittany Lions cap. “What do you mean you’re not going to fight? He just sat you on your ass.”

“I know how you cretins operate. As soon as I start fighting this guy, the rest of you jump in.”

“Cretins. But I meant Cretans with an ‘a’ not cretins with an ‘i.’ The Cretans were Greeks, like yourself, and actually quite intelligent.”

I suppose he intended to snap the glasses in half and present them to his sniggering bros as some kind of trophy. I kept going until he gave up and returned to the party, where he undoubtedly smashed someone else’s glasses. He probably had a quota or something.

Though the incident was humiliating, I managed to walk away without any crushed cartilage or black eyes.

I’ve now successfully avoided fights for over two decades. How do I do it? I used to think it was a matter of maturity—fighting was something that younger, more excitable men did. But then I saw two 50-year-olds (on the same rec-league soccer team) punching each other until teeth flew. After that it was a road-raging old man on the news. He’d been mooned by a carload of teenagers, and sensibly decided to chase them 20 miles down a highway, waving a pistol out the window of his Chrysler.

It’s not just age—it’s ego. It’s taking ourselves too seriously. Sometimes, when I feel slighted, when someone cuts me off in traffic or shoves his way to the front of the checkout line, that 12-year-old with the rad bike wants to come out swinging. But I remind myself: life’s too short to go around pissed off all the time. I’ll be dead before long—and so will the jerk who cut me off.

Dan Morey is a freelance writer in Pennsylvania. He’s worked as a book critic, nightlife columnist, travel correspondent and outdoor journalist. His writing has appeared in Hobart, Thin Air, McSweeney's Quarterly, failbetter and elsewhere, and he's been nominated for a Pushcart Prize. Find him at danmorey.weebly.com.