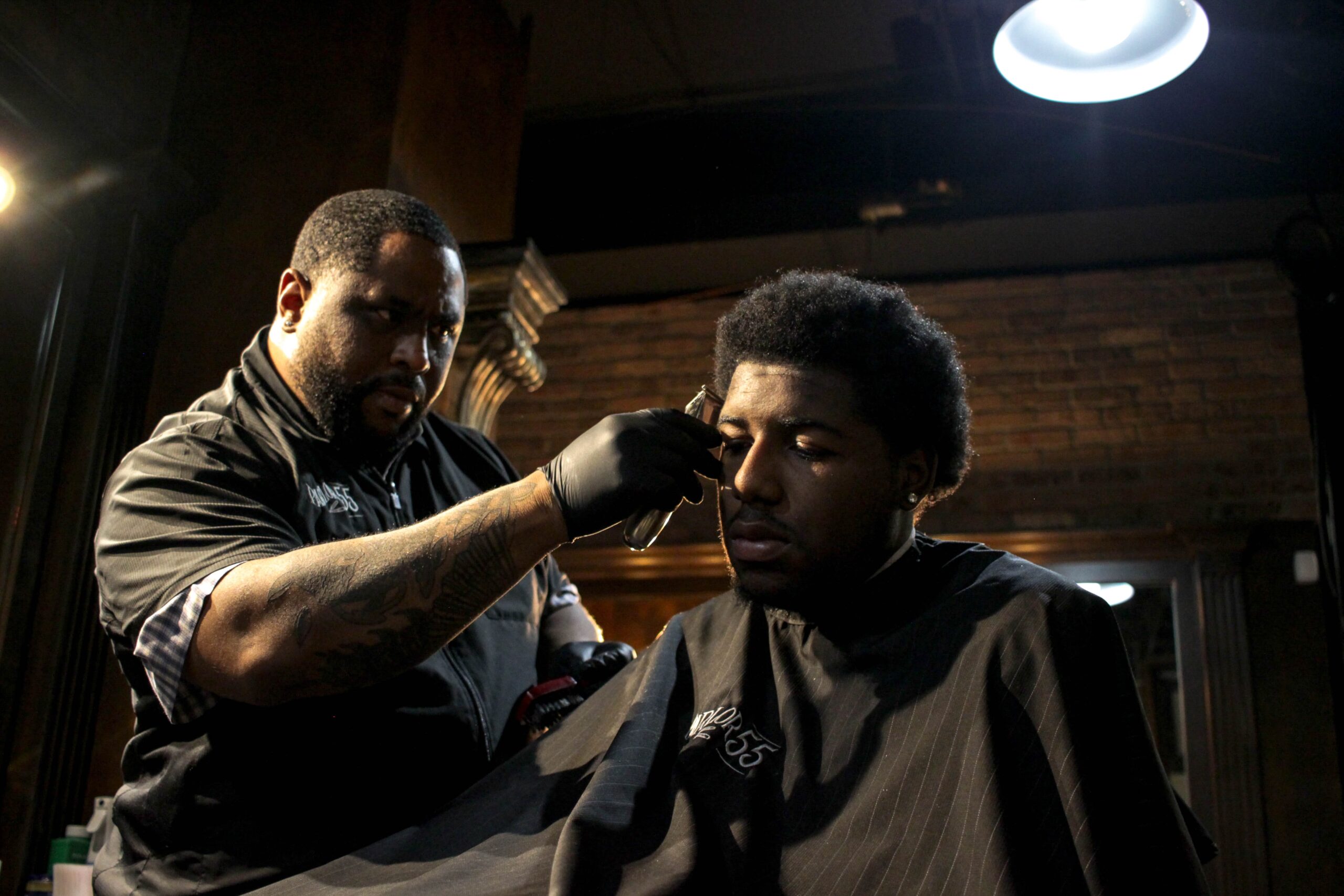 A barber shop is a safe haven for black men. It’s a place where you get to shoot the shit, talk about sports, women, and everything in between.

I have a ritual before I get my haircut. I take off my nail polish. Earrings have to come off, too. The rainbow lanyard that hangs from my pocket must stay inside my car. Most importantly, my voice must get deeper.

Queer folks aren’t as welcome in these parts.

Only the manly men.

Only the straight men.

Only the straight men.

I always crack jokes about being hate-crimed, but I always feel like I’m one slip-up away in the barbershop before it actually happens.

My hands stay underneath the sheet that catches my clipped hair. Talking with your hands is a clear sign of having a limp wrist, and that’s not allowed here. Just head nods and answering any idle chit-chat that you and the barber may engage in.

I don’t keep up with sports, but I make sure to know what happened in at least one of the latest games before I go.

I like the new barber I found down here in Miami. He must not get many customers, or I must come at random times because I never have to wait for him to finish lining someone up. He jumps up out of his chair whenever I walk through those doors.

I don’t know much about him, but he always talks about the new clippers he’s got.

Man, I don’t like em. They’re so light and it takes some getting used to.

He’ll switch back and forth between the classic wired ones and the newer clippers. He’s proud of them and fascinated with how far technology has come. Said they didn’t have these when he started out.

See you’re lucky that I’m the one that’s cutting your hair because those new guys don’t know how to do a box fade.

I nod and let him continue.

Make sure you moisturize your hair as it’s getting a bit dry, I’m telling you this might sound odd, but get some Aquaphor and just rub it in there. It’s just the thing you need.

I take his word since he’s the barber after all.

And we’re done, man. Mind if I take a picture? This is a pretty clean cut.

Once again, I nod and stay perfectly still for him to get those angles.  After he’s done, I make sure I pay him, tip him, and give him the black folks’ way of saying goodbye.

Go in for a not-so-high five. Clasp it a little. Give it a good up-down shake once. Maybe a pat on the back if he’s feeling up to it.

I tell him I’ll see him in a few weeks.

Nothing else happened in that shop.

The only other barber was chatting with his client.

There was a random guy sitting in one of the chairs joining in on the conversation as well.

One of my friends said seeing me in the barbershop was the straightest he ever saw me.

Every time I leave, I’m just happy that blended in.

I’m no longer a straight man.

I get back in my car. Put everything back on. Drive away.

I just want to know why? I never thought I would be called a faggot by another queer man.

You wanted to like me. You showed interest in me, and you definitely wanted to fuck. Until you saw my nails. You asked, “Is that a woman’s hand?” In regard to the picture I sent you where it was my hand that was wrapped around exactly what you were after. I said no and asked if there was something wrong with wearing nail polish and you replied, “No. Just asking.” But then you proceeded to block me. I guess it’s a little too gay to wear nail polish. Being into men is fine. Fucking other men is fine. But wearing nail polish is a no-go. Only faggots do that.

Masc 4 Masc means I’m queer and homophobic. It means I’m out of the closet. but still deep in a gym locker. It means I’m a fag, but not like those other ones. It means I’m white and straight passing. The ultimate sign of privilege in the queer community. It means I’m the better gay.

Another one of you blocked me because I’m black. Same with all the others, you only wanted one thing. The thing that draws all the men to this app. It’s never for dates or friends or finding a roommate. It’s always about sex. You were down, and so was I. Until you asked to see a face pic. I sent one and was blocked immediately.

I guess being black and queer means that I’m towards the bottom of the list of acceptable queer men. You know there’s a difference between having a preference and just being racist. Being gay and homophobic? Sweety, pick a struggle.

I said that I’m black in my bio. I don’t use a profile picture, since I don’t want people who only want me for my skin. There’ve been so many times where men will see a black face and immediately say that they want a “BBC.” They don’t want me. They want what they think comes with me. Just the undercarriage. Not the whole package.

I know we’re both looking for casual sex, but I don’t want to be dehumanized again by yet another white man. Don’t call me chocolate babe as that’s not a compliment no matter how much you think it is.

-Black nail polish is a no.

-Black skin is a no.

What’s next? You won’t like my black hair. My brown eyes too much of a turn off. I’ll give you my astrological chart, but I’m not sure if you want to fuck a Cancer sun.

I love being excluded from the communities I belong to.

WISH THAT WERE ME

While walking down the sidewalk at four in the morning, trying to get some coffee, I saw a dead possum on the ground. I don’t really know if it was a possum, as all that was left was fur and maybe a bit of skin, but one thing was for sure, it was dead.

I don’t know why, but the first thought that came to mind when I saw it was Same, bestie.

Maybe it was just me being sleep-deprived, but I think I know what I meant. I wanted to be that assumed possum. I wanted to be smushed on the sidewalk in front of an elementary school.

That possum was just dead.

I wish I could turn back time just to see what lead up to this. What led this poor little guy to end up this way?

Was he stressed all the time, with this overwhelming feeling of guilt and anxiety running on at all hours in the day with it only being shut off when going to sleep?

Was he struggling to get work done or just even stayed up till 6’oclock in the morning with nothing accomplished and only eye bags to gain from it?

Was he just one bad day away from saying fuck it and disappearing for a while only to be found in the bottom of the canal around the corner or just go off the grid completely?

Possums don’t have clocks or even the concept of time.

Possums don’t get diagnosed with depression and bipolar disorder.

Possums don’t look at their prescriptions and think, fuck it, and down the whole bottle.

They are immune to most snake venom, so maybe OD’ing would be a little bit harder for them to do.

They also don’t have any control over when they play dead or how long they do.

Which means we’re a little bit similar, but at least I can still take matters into my own hands if I want to.

They are also very social creatures, which I’m not but I would be for my bestie.

I might go check up on my bestie again and see if he’s still hanging out on the sidewalk in front of the school.

If he’s not, I’ll still have the selfie that I took of us to always remember him by.

Maybe someone will do the same to me, and we’ll also become besties.

ON THE CONCEPT OF TRAINS

I’ve always been fascinated with the idea of running away. The good ol’ stereotypical way. Y’know the one where you have a bandanna wrapped around a stick and you ride in one of the empty cars in the back of a train?

There’s a third rail on the subway tracks. If you step on it the wrong way, you’ll be electrocuted, and dead before the actual train arrives.

I’ve never seen Trainspotting, but I know that both Ewan McGregor and Johnny Lee Morris are fine as hell, and there’s a scene with a dead, decaying baby in a crib. Died due to the parents being strung out on heroin. I’ve had someone on Grindr offer me meth before. Cocaine too.

You can set nickels or pennies on a train track and if they vibrate, a train is on the way.

Train has a song called “50 Ways to Say Goodbye”. It depicts the way that their lover died as it’s easier to make up these tales than it is to say that they broke up. The lead singer lets anyone, and everyone know in the grocery store about their love life woes.

I’ve made a list of the reasons I shouldn’t say goodbye. Why I shouldn’t bite the bullet and literally bite the bullet. I’ve trained myself that saying “I’m gonna kill myself” isn’t me wanting to die, but rather a way to express my frustration.

Augusta, my hometown, was known for being one of the very few places that still had their county fair rides arrive by train. Yeah, those rides were sometimes old and rickety, but the danger only adds to the experience. Falling off the upside-down Pirate Ship or getting crushed in the moving metal bits of the UFO or tumbling from atop the Ferris Wheel or being flung from the Avalanche wouldn’t be that bad. Especially after being stuffed with funnel cake and vinegar-soaked fries.

I heard a train horn at four in the morning while walking around the neighborhood. I should find it and just walk on the tracks for a while. Just walking and imagining. I don’t have any coins, though I don’t need any coins.

Trey (Tralen) Rhone is queer and black Writing and Linguistics graduate of Georgia Southern University and is currently pursuing an MFA in Creative Writing at Florida International University. He has work published in Mayday Magazine, The Daily Drunk Magazine, and Stirring: A Literary Collection. Tweets infrequently at @TreyRho.

Photo by Chris Knight on Unsplash