Let’s say that the definition of pornography can be expanded to any sort of media that is created to fulfill a singular need. For example, many people enjoy the television show Family Guy. The popular TV show has a host of detractors who complain that the characters and storyline just serve to set up jokes. Even though I love the show, I’d have to say that those detractors are correct. Family Guy is nothing more than comedy porn. You watch the show, you get your kicks, and you are left with nothing–no emotional pay-off and no sweet nugget of morality. So if you can stand those hilarious, yet cold, cold, emotionally detached and tasteless twenty-two minutes of Family Guy, then you have enjoyed comedy pornography at its finest, but if you have enjoyed an episode of Two and One Half Men, then you have enjoyed something with absolutely no merit. And that is worse.

The movie started off with a wedding. Leonard Nimoy, I mean, Liza Minnelli was at that wedding singing “Single Ladies.” Carrie was mad at her husband cause he watched TV a lot and then he wanted to go watch TV somewhere else for two days a week. And this idea of far-away TV-watching made Carrie sad. Charlotte’s husband liked to look at this one lady’s boobs, and Charlotte worried her fat, bald, and ugly hubby might one day touch those boobs. Samantha was on a bunch of pills that made her like sex even though she was old now. And that red-headed one quit her job, therefore, they all went to Dubai. 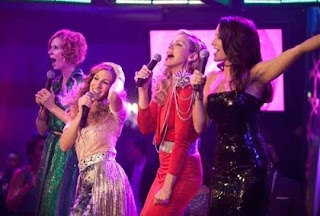 In Dubai, the ladies caused quite a stir, because the culture in the Middle East is different than the culture in New York City. The ladies were all like, “WTF? I like the tops of my boobs showing and being a woman, but these Arab men want my boobs hidden and for me to be quiet.” But quiet and de-cleavaged these women would not be! They stood up on stage and sang “I Am Woman Hear Me Roar.” Then they were waited on hand-and-foot by swarthy, sensitive men. Some of the ladies went on dates with globe-trotting fantasy men. But the best part of the movie was the end.

Let me explain it to you: Samantha was caught having sex on the beach with her Danish fantasy man. (I am of Danish blood, ladies.) This sex-having was a big no-no in the United Arab Emirates. The shah who was financing her $22,000-dollar-a-night hotel room found out about the on-beach sex and stopped paying for the women’s room. That means the women had to pack in an hour! One hour! Because if they did not pack and leave their room in exactly one hour, they would have to pay $5,500 dollars each for another night. “We cannot afford that! We will go to jail!” they exclaimed, which surprised the fuck out of me, to hear that these rich, rich women could not afford something.

(By the way, I am a broke-ass grad student/teaching assistant, and I can come up with $5,500 dollars. I mean, I would have to max out the credit cards that I spent over a decade paying off, but the value of not going to Middle-Eastern jail is, as they say, priceless.)

But the women do manage to pack in an hour, whereupon they rush to book a flight back to the U.S., because if they don’t hurry they’ll have to fly coach. Hey? How’d we suddenly get so spendy?  But the ladies must first return to the bazaar, where Carrie, the dumbass, had left her wallet and passport and subsequently buys all her friends shoes. (No one, by the way, is worried about flying coach while shoes are being bought.)

I forget why, but some guys start chasing Samantha and try to take her purse. They grab it and a bunch of condoms fall out and all the men in the marketplace get mad at her. The women flee and hide in a run-down flower shop filled with Middle-Eastern women in burkas. Turns out, all the burka women read Suzanne Somers books and wear the latest NYC fashions under their religious garments. Everybody wants to be a rich white lady! This movie really goes to show that Consumer Capitalism is way better than Fundamentalism. You can’t even wear the shit that you see in Vogue under Fundamentalism. Stupid, stupid not-American culture.

After that little bit of ethnocentric silliness, the Sex in the City ladies don burkas, so they won’t be recognized as harlots, and make a mad dash to the airport. However, they are having trouble hailing a cab in their unflattering garb. So Carrie does what any self-respecting lady would do, she hikes up her burka and shows the Middle-Eastern cab driver her legflesh. The car screeches to a halt.

Wait? Weren’t the Middle-Eastern guys pissed when Samantha showed her cleavage? But this cab driver is OK with lady parts? What the hell is going on in this movie? Is the movie trying to say that it is not all right for men to treat women like sex objects but it is fine for women to use sex to get the things they want, and therefore, it is all right for women to be treated as sex objects as long as the women choose to be treated like sex objects?  That’s a bad lesson, I think, to take away from this movie.

But I doubt this movie even functions as pornography for women. Let me define what pornography for women is really quick, and I’ll try to make it as inoffensive as possible. You know that guy, the one that your girlfriend is always talking to on the phone?  He’s like the blind guy in Raymond Carver’s “Cathedral,” or like Eric Stoltz in any ’80s movie. He dotes on your girlfriend and is probably in love with her, but he never had the guts to ask her out and thus fell into the “friend zone.” He’s the guy she goes and talks to after a fight, probably to make you jealous, and to have the unconditional support of a male. The reason that guy is available for her is because he’s never had the nerve to ask out any girl he actually likes, and instead dates girls who look like funhouse-mirror versions of your girlfriend. That guy is porn for women. He’s all the emotional support of a relationship without the stress and sacrifice of a real relationship. A fantasy man incapable of saying no.

And if you are that guy, then fuck you. Get your own girlfriend. Seriously. She’ll never love you. She’s just using you for your inability to set boundaries.

But I forget–why am I reviewing a “woman’s” movie for BULL: Men’s Fiction?

Because I thought it would be funny.

← R.I.P. Barry Hannah, A Guy
The Expendables: A Movie with No Balls, or Point →