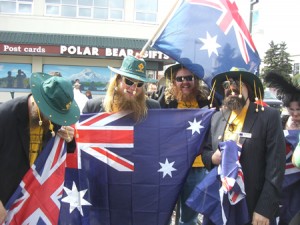 “According to our research,” said the researchers, “if everyone in Australia cut their drinking down by 6.4 liters, the country could save 789 million dollars, have one-third fewer deaths and diseases. They’d miss less work, too.”

“Also, Australia,” said the researchers. “Sometimes when you’re drunk, you say things that are hurtful.”

“You kind of owe New Zealand an apology for invading them when you were on that bender.”

“No, Australia. I don’t believe that dingos made you get drunk. You need to stop blaming everything on dingos.”

“Don’t walk out, Australia. Remember in the eighties when we were doing all that blow?” said the American researchers. “You and Qatar and Italy took us aside and got us the help we needed. And now look at us. We’re getting by. But sometimes, there are cravings. Sometimes.”

“Come on in for a hug, buddy. That’s it. Everything is going to be fine.”