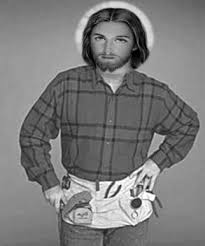 Young carpenters with chips on their shoulders, cocky, arrogant, holding fresh hammers, tiny pencils tucked roguishly behind the ear, flannel shirts with fresh-fold crinkles still faintly visible, are at greater risks of falling off things then their experienced and world-weary counterparts.

According to the Journal of Industrial Medicine, novice carpenters are at greater risk of injuring themselves due to a disregard for safety precautions and gravity.

Older carpenters are less likely to disregard safety precautions because most of them were youthful and cocksure carpenters who, at one point or another, fell off something.

“For me, it was a roof,” said an experienced carpenter. “I was walking around on a Johnson-56X House Covering. Suddenly, due to my disregard for safety and poor navigational skills, there was no more roof under me. I fell and broke my arm. Like me, these kids will learn through the experience. We call it ‘The Plummet of Enlightenment.”

Inexperience isn’t the only factor, however. Many contractors don’t supply safety equipment and green carpenters may not know to bring their own, or they may not have the capital to buy their own. The pressure to work hastily often causes accidents in the inexperienced as well.